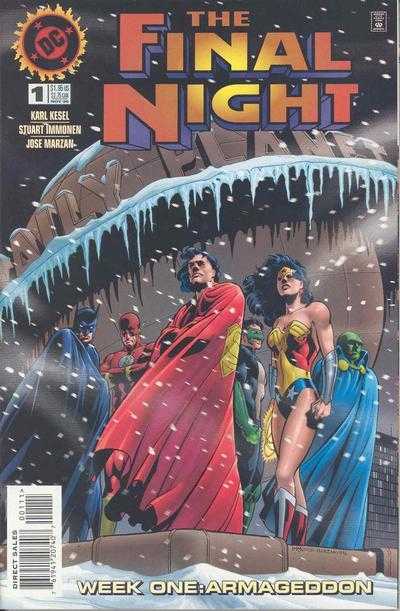 If you’ve been reading my Retro Reviews, you know that I’ve been systematically reading my way through my Legion of Super-Heroes collection, starting in the late 1970s, since last summer.  I’ve reached the 90s rebooted Legion, which is not a favourite Legion run of mine, but I haven’t gotten to the bad issues yet.

Anyway, in a fight with the Emerald Eye of Ekron, who had taken over their teammate Shrinking Violet, a small group of Legionnaires, alongside SP Officer Shvaughn Erin, and Work Force member Inferno, got tossed back in time to 20th century Metropolis, where they met a Superman who remembered different versions of them.

Anyway, immediately upon arriving there, they got swept up in The Final Night, a four-issue weekly event, and I decided that, since the Legion played a prominent role in that story, I should incorporate it into my rereading.

I don’t remember a lot about this event, other than enjoying Stuart Immonen’s artwork, Ferro showing up in the Legion, and I think, Hal Jordan hosting the Spectre?  Or was that somewhere else?  See – this hasn’t really stuck in my memory much, but I’m curious to see how it reads now.

First off, I swear I remember this series as ending with Hal Jordan becoming the Spectre, but apparently he spent a few years being dead first.  It’s weird how that was combined in my head.

Anyway, I haven’t done a whole lot of these retro review columns focusing on event books.  This was a strange one.  It was four weekly issues, and while it started off as being very much focused on Superman and the Legion of Super-Heroes, by the end, this was all about the redemption of Hal Jordan, even though he wasn’t mentioned prior to the last issue.

I think that Kesel did a good enough job of trying to find something for many heroes to do in the early issues, but strangely, most of the time characters shown on the covers were not really in the books, and much of the individual work was (presumably) left to happen in the tie-in books, which weren’t even advertised in any of these issues.

I like the way Kesel took the old Sun-Eater story, which originally happened in the 30th century, and culminated in the death of Ferro Lad, and tries to modernize it, having it happen in the 1990s, but at a point where some of the Legion were around.  Ferro (no longer Ferro Lad) was introduced in a tie-in issue, but ended up taking up way too much screen time in the last two issues, and during the Legion tie-in issue.  Ultimately, I don’t think Ferro added anything to this story, aside from a sense of nostalgia in readers much older than I am.

The Sun-Eater doesn’t make that much sense.  By the 1990s, the DC Universe is pretty well-populated, and the people of Earth have met beings from all over, yet this Sun-Eater thing enters the solar system with almost no warning?  There are no legends that precede it, only Dusk, who somehow always knows where it’s going next, despite the fact that it is propelled by the previous sun going supernova, which I would assume would make its path hard to predict.

We learn that the Sun-Eater exists in more than one dimension, and that’s just accepted as fact and left alone.  Likewise, when Luthor and Brainy make their plan to use force shields to contain the sun going nova, they never think about what they’ll do afterwards.  Like, great, you won’t get blown away, but you would still not have a sun.

I will give a lot of credit to Stuart Immonen, who pulls off the large cast of this book beautifully.  His art has grown a lot by this point, and looks very polished.  I think he’s the only artist I’ve seen make Superman look good with long hair!

I do wish there had been space to include more personal stories in this series (aside from the very forceful woman who insists on wearing out both Ray and Firestorm).  Dusk is never as interesting as Harbinger was in Crisis, and by the end of all this, I kind of hate Ferro.

I suppose it’s good that Hal Jordan redeemed himself a little.  I was never a big Green Lantern reader, and always placed Hal near the bottom of my favourite GL list, but I do remember finding his sudden transformation into being Parallax felt forced and kind of stupid, and used as a way to bring Kyle Rayner in.  I guess this served as 90s fan service, as it closed off Hal’s story (until he became the Spectre, and then later came back to life in the Johns era).

I don’t really have much more to say on this.  It was not very memorable, and were it not for my interest in the Legion right now, I never would have circled back to it.

If you’d like to read this event for yourself, go here: