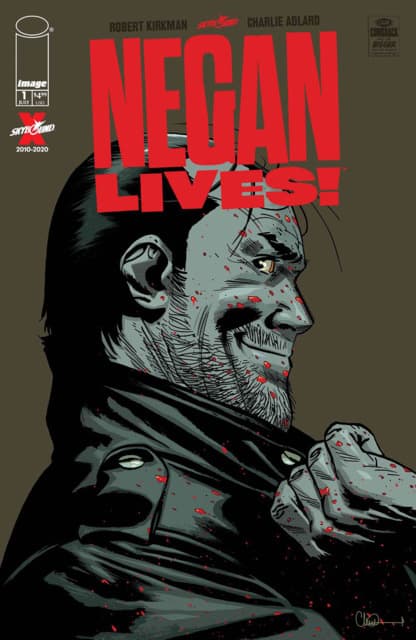 Negan Lives! #1 – It was a very nice surprise to learn that Robert Kirkman, Charlie Adlard, and Cliff Rathburn returned to the Walking Dead universe for a one-issue follow-up to check in on Negan.  I hate Negan.  He’s one of the most irritating characters I’ve read, but I love the Walking Dead, and I love Adlard’s art, so this book made me very happy.  I especially feel that way because I didn’t know about it until just a few days ago, and didn’t know until I’d finished reading it that Kirkman and Adlard did it for free, so that the proceeds from it could help support comics shops that have been struggling since the lockdown.  Negan’s having a hard time dealing with his isolation, living in exile from the community, but he hasn’t really lost his edge.  I don’t want to spoil anything, except to say that I didn’t realize how much I’d missed the terror that Adlard can drum up by having some walkers appear out of nowhere on a dark night.  Great stuff. 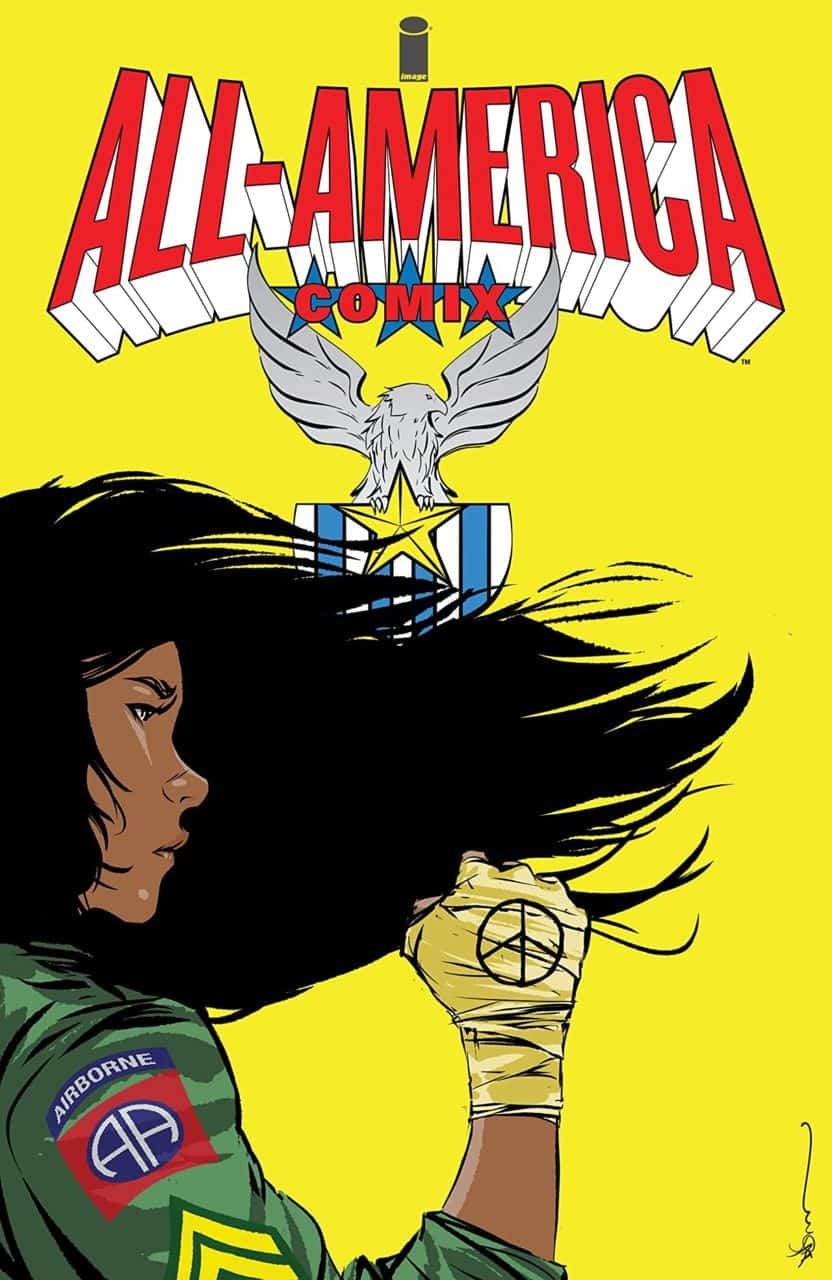 All-America Comix #1 – I remember when Joe Casey first brought us the Marvel superhero, Ms. America Chavez, and now she’s back, only she’s America Chavez, and her story is being told by Casey and Dustin Nguyen at Image.  I don’t know the whole story behind this book (I’d rather like this comic to speak for itself), but this reminds me of Casey’s comic Sex, which is one of the best Batman comics I’ve ever read, only without the actual Batman.  In this issue, we meet America, and see how she interacts with this world’s counterparts of the Avengers and Doctor Doom.  I thought this was a one-shot, especially since no further issues have been solicited, but it ends with a ‘to be continued’, as America starts to realize that there could be something wrong with reality itself.  Nguyen’s art is different from how it’s been on Descender and Ascender, but it’s still very nice, and America is a compelling character.  I would definitely be onboard to buy more if there is more coming.

Fire Power #1 – I’m not sure why, but I’d originally planned on passing on this new series by Robert Kirkman and Chris Samnee, despite the fact that I usually like everything they make.  I think it was the fact that it was debuting with a $10 OGN that made me think I’d just wait and see.  Luckily, Skybound and Image decided to make this the 2020 Free Comic Book Day book, so I got a copy of the first issue this week.  It’s excellent, and of course it is.  I was being a fool.  This issue picks up fifteen years after the prelude, and Owen Johnson is living a pretty comfortable life.  We meet his family and friends when he has a barbecue, but his past also shows up.  It turns out he has a connection with a secretive group of Shaolin monks, and is the only person in a thousand years who has been able to generate fire balls out of his body.  He doesn’t want to be a part of that world, but it doesn’t look like he’s going to get his way here.  Samnee’s art is always so nice – the last page genuinely surprised me.  I think I might be picking up the prelude next week, and adding this to my pull file…

Protector #4 – Simon Roy, Daniel Bensen, and Artyom Trakhanov have put together a very different view of the future, and while it’s not always that easy to follow, it’s a very cool comic.  The First Knife accompanies the American cyborg thing and the priestess who thinks he’s Jesus to a set of ruins, and has to deal with the fact that his people, the Hudsoni, are not fully in agreement with him.  When one young warrior decides to make her dissent known, things get messy.  No one draws like Trakhanov – his work is beautiful, rugged, and always interesting.  It’s very hard to predict where this series is headed, and I like that.

Vampirella #10 – It’s easy to miss a step or two when reading a Priest comic, and the delay between issues did leave me a little confused at first.  Vampirella learns that her nun “friend” has been killed, and goes seeking revenge, as we get closer to the end of Priest’s first season on the book, and see why Ella decided to put herself in therapy.  I love this title, and am looking forward to the upcoming spinoff title as well (more Priest!). 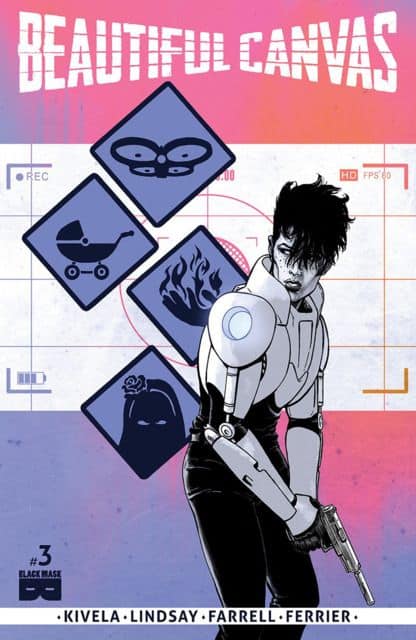 Beautiful Canvas #3&4 – I bought the first two issues of this Black Mask series when they came out, but I found them hard to understand, and gave up on it.  Somewhere along the way, I got the last two issues, and I’m glad I did because Sami Kivela’s art is fantastic, but Ryan Lindsay’s story just never worked for me.

Man Plus #1-4 – This Titan miniseries by André Lima Araújo is pretty good.  It’s set in the future in Portugal, where a particular city has become the centre of the cyberpunkish body modification industry.  When a female android of a type not usually allowed on Earth gets involved in a fight with some secretive mercenaries in the middle of the city, an elite squad of police try to figure out what’s going on.  This is a good police procedural that incorporates a lot of futuristic elements and strong character work.  I feel like Lima Araújo was leaving the door open for this to become a recurring series.  His art is great, and I like the way he married manga elements to the more typical European sensibility.  I’m glad I picked this up a while ago, and that I finally had the time to read it.

Snow Blind #1-4 – Ollie Masters is making a name for himself as a talented crime comics writer.  Snow Blind, a Boom! series from a few years ago, illustrated by Tyler Jenkins, is a tight family drama.  Teddy is an unhappy teenager growing up in Alaska who doesn’t connect well with his father, but after he posts a picture of him to social media, Teddy is surprised to learn that he’s put his family in danger.  It’s not long before he has to deal with the fact that his entire life he’s been in witness protection without his knowledge, but that’s only the first thing he learns.  I love Jenkins’s watercolours in this book, and how he portrays the Alaskan landscape, but there are a few action sequences that could have been easier to understand.  Still, this is another solid hit in the Boom! back-catalogue.

Sun Bakery #1-4 – Corey Lewis is an energetic and exciting cartoonist, who made an attempt at an ongoing anthology series that I guess got canceled after its fourth issue, despite there being plans for future ones discussed throughout.  This is a mixed bag, but there are some very cool ideas in this book, and some great images.

This Place: 150 Years Retold – This anthology of stories set in Canada (or Northern Turtle Island) all share Indigenous perspectives on different moments in our nation’s history, from a variety of mostly Indigenous creators.  They explore the relationship between First Nations people and the Canadian state, focusing on broken promises, but also the layers of resistance and enduring strength of a people who, as one story intro puts it, have been living in a post-Apocalyptic or dystopian environment for centuries.  The stories are laid out in chronological order, and what makes this book frustrating is the realization of how little has changed.  A few of the stories are a little stiff, but most are strong character pieces, and make excellent use of the narrative to explain to readers in settler cultures a point of view they might not have previously considered.  I think this is an important book to have on classroom shelves, and I appreciate having had the opportunity to read and think about it.  I love that the last story is a science fiction one, portraying an optimistic future.  This is good stuff.

Anteloper – Tour Beats Vol. 1 – International Anthem is an incredible jazz label out of Chicago that really champions live improvisation and political music.  Anteloper is trumpet player Jaimie Branch and Jason Nazary.  They put together this incredible collection of synths, drums, and trumpet that fits nicely with the International Anthem body of work.  It’s a short album, but it’s the one I’ve played the most this week.  Their release party on Twitch was exceptionally cool.

Lapalux – Esrevoinma – Lapalux returns with this EP which features some reworkings or live versions of tracks off his latest album, along with some other ambient, spacey goodness.  This is a nice meditative project.