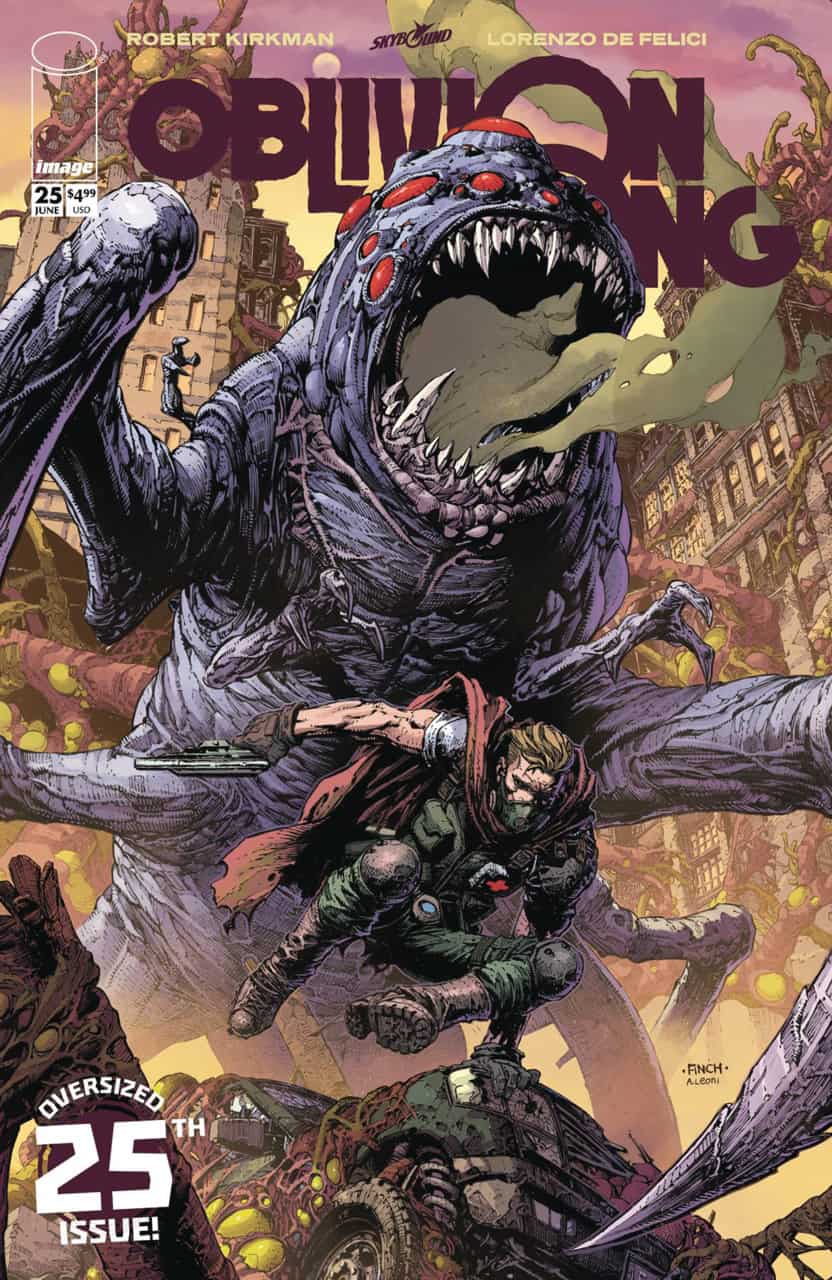 Oblivion Song #25 – This is a huge issue, but a difficult one to talk about without giving away some major spoilers.  It’s been a while since the last issue, and Nathan’s been doing his best to survive and deal with being the only human left in Oblivion.  The Kuthaal have been busy too, though, and they have plans for the Earth.  This issue reminds me of how much I’ve missed this book.  Robert Kirkman has once again created a very fluid big plot, as the book moves into the third stage in its existence, and ratchets up the excitement again.  I love Lorenzo DeFelici’s art in this book, and the crazy designs that he keeps coming up with.  This issue also features a backup drawn by the book’s usual colourist, Annalisa Leoni, and it’s also gorgeous.  A big surprise is that the flipside of the comic features a Science Dog story, reviving an occasional backup from Invincible, drawn by Cory Walker.  It ends with a cliffhanger, so I wonder if that means we’re going to get to see even more of Science in the near future (Kirkman is up to all sorts of tricks, and appears to have spent the shutdown time very productively). 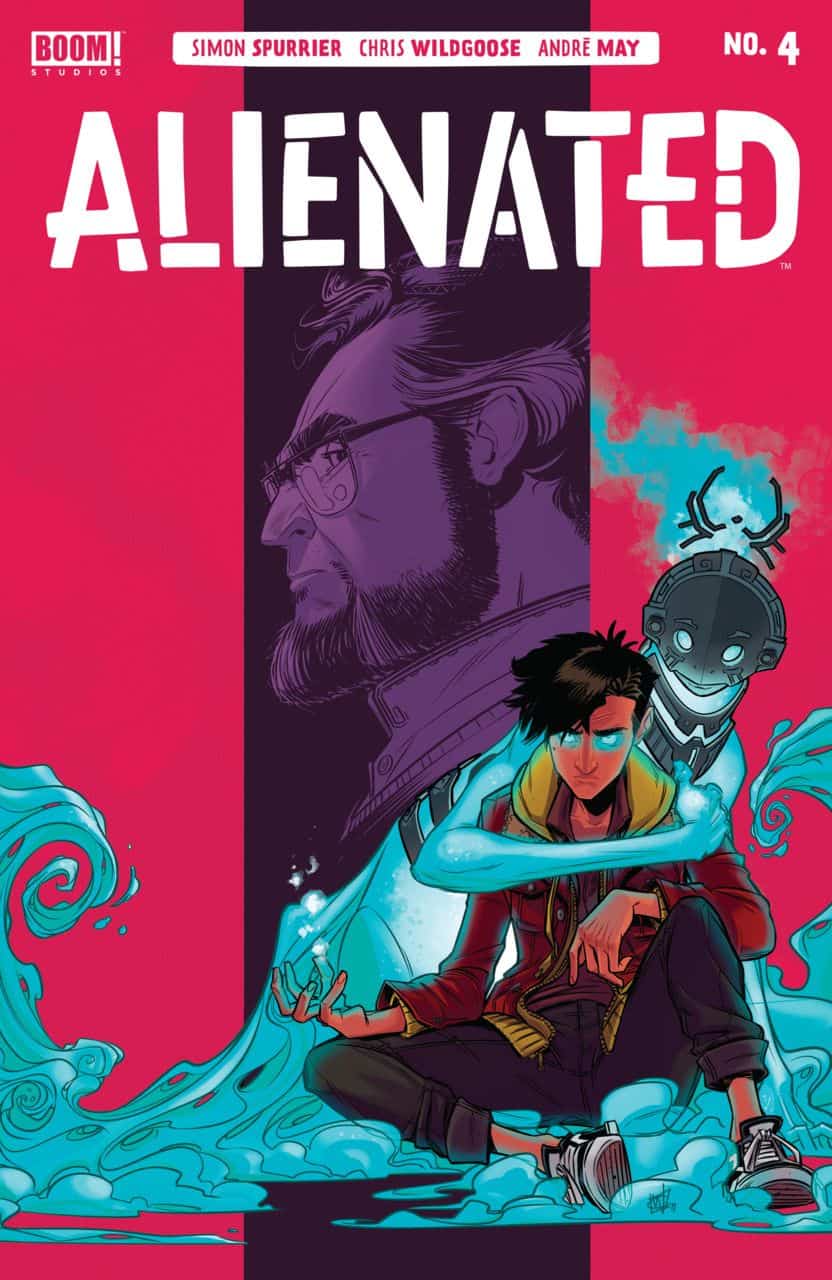 Alienated #4 – This Boom! series is one of the best on the stands right now.  A trio of unhappy teens have come into the possession of an alien being with some kind of psychic powers that has linked them telepathically.  In this issue, Samir, the so-far quietest and most chill of the group, grabs the being so he can track down his father and get some answers as to why he left him.  It’s a very emotionally taut issue, and writer Si Spurrier really nails the way the different kids react to what they learn.  I’m a big fan of the realistic approach to this fantastical concept, and feel like Samir is going to stick with me for a while, mostly because he reminds me very much of someone I know.  It’s a great series.

Empyre: Fantastic Four #0 – I’m pretty weak.  My interest in the Empyre event is entirely because of Al Ewing’s involvement in it, yet here I am picking up Dan Slott’s Fantastic Four prelude.  I guess the upside of Marvel only putting out a few books a week has me more interested in this event.  The Richards family end up at a galactic casino where The Profiteer, an Elder of the Universe, has a young Kree and young Skrull constantly reenact battles from their peoples’ long conflict.  The FF get involved, as Reed is shocked to learn that the war has ended, and that it’s had a devastating effect on the galactic economy.  This was a completely acceptable issue, although it doesn’t explain why the FF looked to be working with the unified empires in the end of the Avengers prelude.  I am interested in checking out the main event next week, despite having learned time and time again to not have many expectations for events like this.

Excellence #8 – In this issue, as Spencer is confronted about his plans and activities, we get a glimpse at the power structure behind the Aegis, and start to see a little more clearly how and why powerful White people (a certain President appears) are the only ones “worthy” of protection from hereditary families of Black magic-users.  The political subtext of Brandon Thomas and Khary Randolph’s excellent series is ever more relevant, and Spencer’s mission feels ever more urgent.  This is a rich and complex comic, with a lot of subterfuge and layered meanings making a close read important.  It honestly surprises me that we are only eight issues into this story, as so much has happened in this book.  It is great.

Ginseng Roots #5 – It’s such a treat to get another issue of Craig Thompson’s amazing new autobiographical series so soon after the last one.  This issue digs into the history of ginseng cultivation in the Wisconsin area starting with indigenous people, through the post-War growth of industrialized farming.  Like every issue before it, it’s a fascinating mixture of personal memoir, factual reporting, and cartooning.  This is an impressive work, and I think it benefits so much from serialization, as opposed to being read in collected form; I like how Thompson lets us in on his thought process while structuring this series.

No One’s Rose #3 – I remain very impressed with this dystopian series from Zac Thompson, Emily Horn, and Alberto Alburquerque.  The remains of humanity live in an ecologically balanced dome that is reliant on the labour of an underclass.  A separatist faction wants to go live in the wasteland outside the dome, and embrace evolution, and to further their aims, they announce that the tree that the dome is constructed around is dying.  At the centre of all of this is a pair of siblings that sit on opposite ends of the political spectrum.  Tenn is a dutiful, if perhaps easily manipulated, junior scientist, while her brother, Seren, is staunchly opposed to the ruling class, even if he’s beginning to feel disenchanted with the rebel group’s approach.  Thompson and Horn have packed a lot into this book in just three issues, and everything about this comic feels very relevant to our current experiences.  Albuquerque’s work is as fine as it was on Letter 44, and he gives the comic a lot of life.  I really recommend checking this title out.

X-Force #10 – It’s nice to see this title return, finally, but I’ll admit that I was a little underwhelmed by this storyline before the shutdown.  Wolverine’s squad ends up in trouble with some plant beings on an island that Beast has messed with, and it leads to Jean having to bring in a rescue squad and compromise her morals.  Ben Percy needs to figure out just what this book is meant to accomplish.  In the earliest issues, it was starting to feel more like the flagship book, but now it’s kind of meandering and lost.  I’m also getting tired of writers using resurrection so often – it makes it a lot less impactful when characters are in danger, knowing they’ll be brought back right away.

November Vol. 1 – The Girl on the Roof – This first volume of three hardcovers by Matt Fraction and Elsa Charretier really grabbed me.  Fraction has put together a confusing story about three women whose lives are apparently connected, although it’s not all that clear how yet.  One woman is given a very strange job – she has to solve a number puzzle in the newspaper every day, and then broadcast her answer over a radio, in return for handsome and untraceable payments.  The second woman finds a gun in the street one night, and makes the mistake of doing the right thing.  The third woman is a 911 dispatcher who clearly has some issues with one of the cops in her precinct.  Charretier’s art reminded me of some of Darwyn Cooke’s work, and is very good (with colours by Matt Hollingsworth) at giving this book a real sense of foreboding.  There is one sequence involving police that work in evidence control that I found confusing, but I might not have been paying enough attention while reading it.  I’m looking forward to reading the rest of this story, and learning how these parts fit together.

Terror/Cactus – Confluencia – This Washington group makes “psychedelic electro cumbia and experimental digital folklore,” which is a pretty good description.  This new album is a slow grinding exploration of cumbia soundscapes with an ambient bent to it.  This is a new discovery for me, and I like getting lost to it.

Armand Hammer – Shrines – Billy Woods is one of the greatest rappers alive, and his partner in Armand Hammer, Elucid, is not that far behind him.  This new collaboration is packed with terrific rhymes, political commentary, and great beats from the likes of Andrew Broder, Kenny Segal, and some of their usual Backwoodz Studioz producers.  Guest appearances include Pink Siifu, Quelle Chris, Akai Solo, Earl Sweatshirt, and the incomparable RAP Ferreira.  I’m so glad to have this in my collection now.

Hania Rani – Home – In addition to Rani’s usual tranquil piano, this new album adds in more vocal layers and other instrumentation.  It’s still a very relaxing ambient bath of sound, but with more focus to it.  It’s very pretty.

Terrace Martin, Robert Glasper, 9th Wonder – Dinner Party – Terrace Martin, Robert Glasper, and 9th Wonder got together (I think remotely) to put together this quick album that features Kamasi Washington on every track.  It’s very political (even the instrumental tracks), and lush and wonderful.  My only complaint is that at 23 minutes, there’s not nearly enough of it.