After the epic six-part movie Digimon Adventure tri., there’s more to the journey of the Digital Monsters. There needed to be something special since it’s the 20th anniversary of the characters. Digimon Adventure: Last Evolution Kizuna arrives at the end of September and early October for fans to once more enjoy the DigiDestined. Here’s the press release from Shout! Factory and Toei Animation: 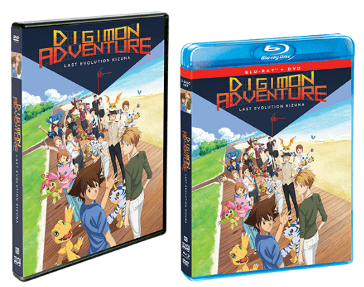 Highly Anticipated New Movie from Toei Animation Available for First Time in U.S. and Canada
in Both Original Japanese and English Dub as Digital Download and on DVD and Blu-ray.

LOS ANGELES – July 20, 2020. Fans will soon welcome the DigiDestined into their homes to watch the long-awaited, 20th anniversary feature film “Digimon Adventure: Last Evolution Kizuna.” This fall, Toei Animation and Shout! Factory are bringing this new animated movie to North America for the first time ever as both a digital and home video release. On September 29, “Digimon Adventure: Last Evolution Kizuna” will debut first as a digital download available in original Japanese with English subtitles or English dub on Amazon Prime Video, iTunes, Microsoft and Sony PlayStation Network; followed a week later on October 6 with the retail home video release on DVD and Blu-ray Combo Pack (Blu-ray + DVD from Shout! Factory). To mark today’s announcement, Toei Animation premiered the official English dub trailer on IGN as well as revealed the film’s English dub cast (provided below).

Fans should stay tuned for special news and activities from Toei Animation and Shout! Factory ahead of the movie’s release.