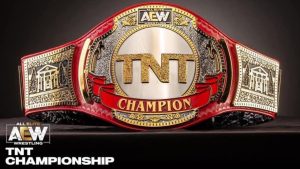 The first title defense for the completed belt occurred on August 12, 2020 with Cody Rhodes defeating Scorpio Sky to retain the belt in Dynamite.

Cody was presented the new belt earlier in the day.

It looks better than expected.

The second title defense for the complete gold and red AEW TNT Championship is next week when Cody Rhodes faces Brodie Lee.

Note the new day and time as Dynamite has been pre-empted on TNT due to basketball I believe.

What do you think of the completed strap?