The Gangs All Here In Joker War Finale!

There lots more variant covers on top of the above.

There is also the Batman 100 Project for the Hero Initiative. To see what is for sale for a good cause check them out here. 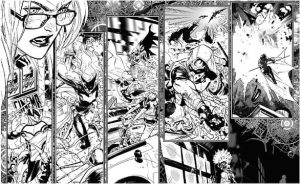 In this extra-sized finale issue, “The Joker War” comes to a city-shattering conclusion as Batman battles The Joker in a brutal, no-holds-barred final duel! This is a fight 80 years in the making, and its outcome won’t just change Batman’s life—it will change Gotham City for years to come!

So, do these teaser and preview pages intrigue you enough to pick up the issue next week?