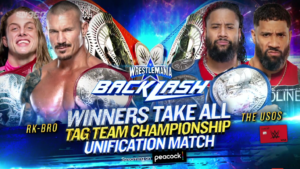 Last Friday on Smackdown the two teams were to sign the contracts for the Wrestlemania Backlash 2022 match. 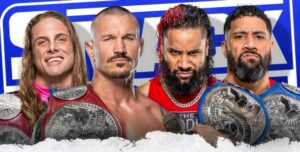 Here was the WWE tease for that signing.

A little over a week away from their monumental Tag Team Title Unification Match at WrestleMania Backlash, Raw Tag Team Champions RK-Bro head to the blue brand to sit down with SmackDown Tag Team Champions The Usos to sign the contract for their epic collision.

From superkicks to RKOs, both tag teams have traded their fair share of shots across both brands over the past few weeks. With no love lost between either team, can RK-Bro and The Usos put pen to paper without any fireworks?

However, the Undisputed Universal Champion Roman Reigns threw a monkey wrench into these plans, even though he set the Usos on the unification mission, resulting in Drew McIntyre evening the odds a new match set for WWE Wrestlemania Backlash 2022. The ruckus was described by WWE as follows.

When order broke down in the contract signing between Raw Tag Team Champions RK-Bro and SmackDown Tag Team Champion the Usos, a distraction by emerging Undisputed WWE Universal Champion Roman Reigns allowed Jimmy and Jey to take out Randy Orton and Riddle. The Head of the Table then ripped up the Backlash Tag Team Unification Match contract and stuffed it down the throat of The Original Bro. Before the dust cleared, though, Drew McIntyre joined the party to take down the Usos and send the irate Reigns heading for the hills. 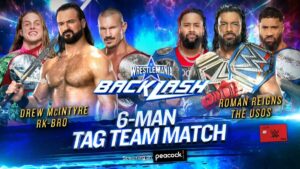 The WWE tease for that new Wrestlemania Backlash match is below.

At the prompting of Undisputed WWE Universal Champion Roman Reigns, The Usos stormed Monday Night Raw to challenge RK-Bro in the hopes of uniting the SmackDown and Raw Tag Team Titles. After The Usos justified their claim by dispatching The Street Profits and sealing the challenge with a double superkick to Randy Orton, The Viper & The Original Bro crashed SmackDown to accept The Bloodline’s challenge and dish out some retribution in the form of an RKO. RK-Bro would come to crash the party on the ensuing SmackDown, but the blue brand champions took exception with their presence. Orton & Riddle would proceed to lay down the challenge, and the longest-reigning SmackDown Tag Team Champions weren’t going to run from the fight.

Things all changed big time, however, when order completely broke down in the contract signing between RK-Bro and The Usos on the April 29 edition of SmackDown. After a distraction by an emerging Reigns allowed Jimmy & Jey to take out Orton and Riddle, The Head of the Table ripped up the Backlash Tag Team Unification Match contract and stuffed it down the throat of The Original Bro. Before the dust cleared, though, McIntyre joined the party to take down The Usos and send the irate Reigns heading for the hills.

In response to the calamity, Special Counsel Paul Heyman lobbied with WWE Official Adam Pearce to add Reigns and McIntyre to the Tag Team Match and transform it into an all-new Six-Man Tag Team Match for WrestleMania Backlash.

Will The Bloodline conquer the combined forces of Drew McIntyre and RK-Bro? Don’t miss all the action of WrestleMania Backlash, streaming live, Sunday, May 8, at 8 ET/5 PT on Peacock in the United States and WWE Network everywhere else.

The Bloodline looks to take over Monday Night Raw tonight

Undisputed WWE Universal Champion Roman Reigns is bringing his “Island of Relevancy” to Monday night as The Bloodline takes over Raw.

The Head of the Table comes to the red brand following a chaotic contract signing on SmackDown that saw Reigns jump in to back up his cousins The Usos and deliver a Superman Punch to Randy Orton before Drew McIntyre ran in to even the odds against The Bloodline.

With their epic Six-Man Tag Team Match at WrestleMania Backlash against McIntyre and RK-Bro now official, what will Reigns and The Usos have to say to the WWE Universe?

Interesting that their advisor Paul Heyman is absent from the graphic yet he’s usually front and center on the Smackdown teaser images. 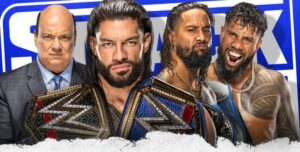 Although his omission is not totally unprecedented.

Stay tuned for more tonight, then on this Friday’s Smackdown culminating at this weekend’s Wrestlemania Backlash 2022.