It’s time for fans of Paul W.S. Anderson’s Event Horizon to celebrate, as not only has the film just turned twenty-five, but it’s also receiving a beautiful Steelbook from Paramount in honour of it. It’s hard to predict what films will get the Steelbook treatment, but with the quality cases that Paramount has been delivering, one can only hope all of our favourites in their catalog will one day join the club. Let’s take a look at what this one looks like. 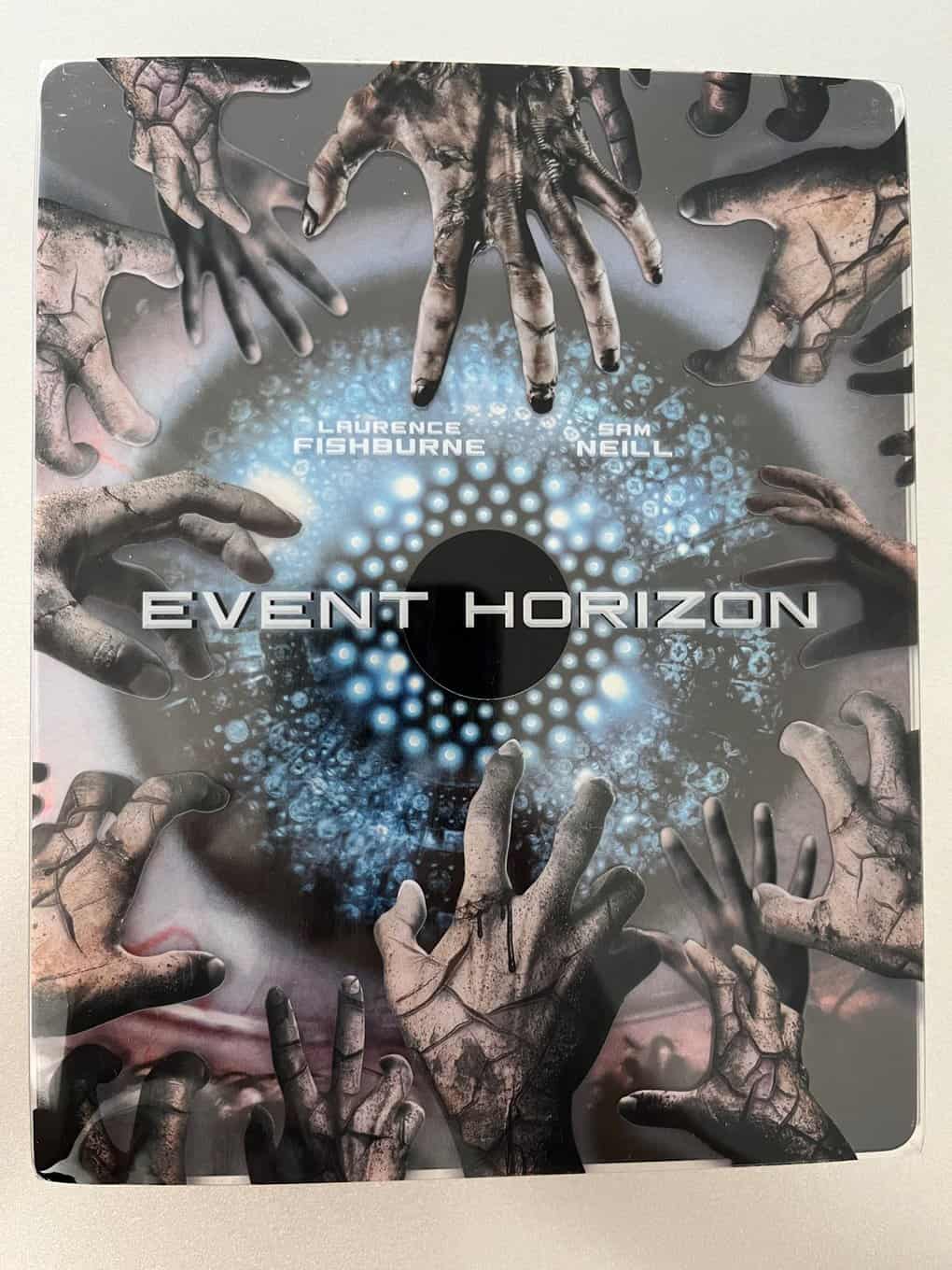 Right out of the gate you’ll find that the Steelbook comes with a slipcase. If you’re a fan of this, that’s great! It’s a nice extra layer that allows the possessed hands from hell to reach towards the center of the case where we find the film’s title, as well as Sam Neill and Laurence Fishburne’s credits. The widened eye and dark pupil at the center just look fantastic, and the hands all pop beautifully. It all comes together nicely and really sells the horror side of the movie by filling up any negative space on the case with these hands reaching out to tear you apart. 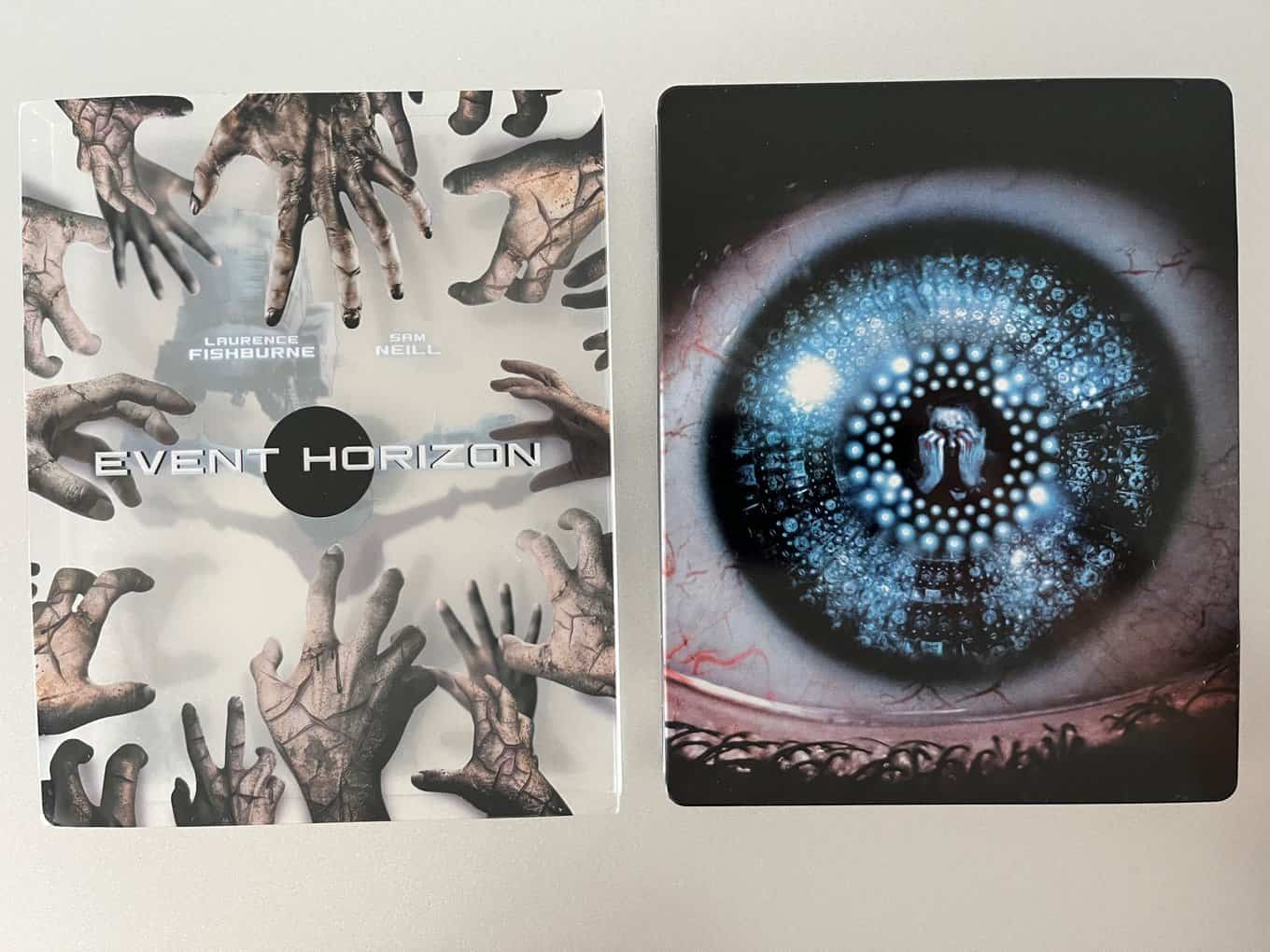 Taking off the slip cover we get a calmer cover of the case, with it simply being an eye, the dark pupil removed and in its place is Neill’s character Weir gouging out his own eyes. It’s eye-ception. Within the iris is the lit up gravity drive, which is the portal that opens the gateway to Hell. It’s a nice reveal, and it does work on its own; however, you do lose the film title if you want to go without the slipcase, so that may be a personal choice depending on how your collection or display is. 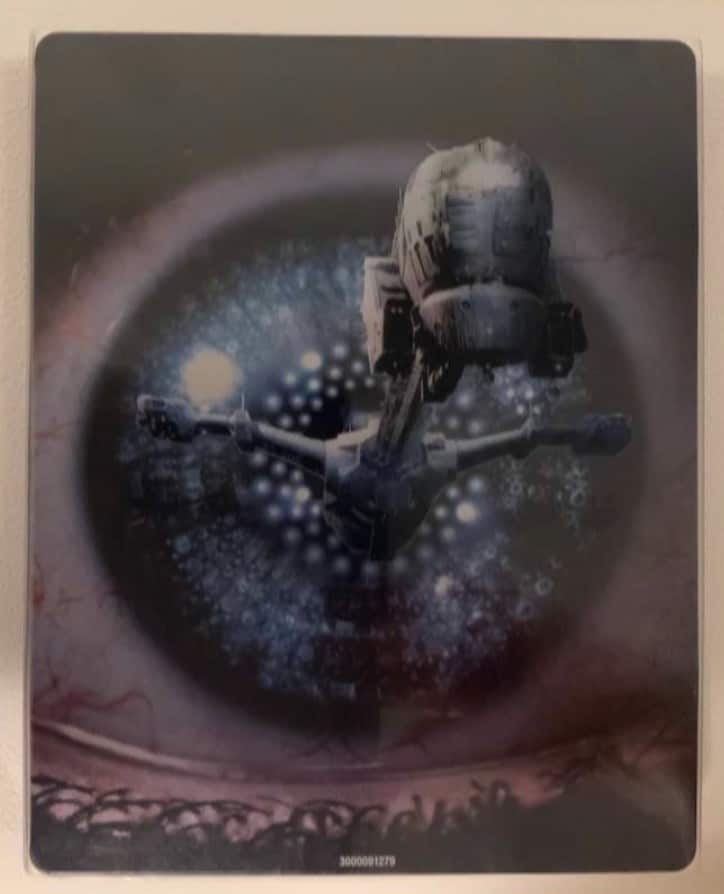 On the back we’ve got the same eye when there’s no slipcase, and the Event Horizon starship coming out of the eye if you do have the slipcase on. Personally, I’d have left the eye off the back altogether, as even when opening the case up it’s not like it looks like the eyes are a part of a larger face. They’re the same eye, but they’re both separate in their placement. I’d have just kept the back of the slipcase blank (or added the hands once again) and put the ship out in space on the back instead of on the slipcase. 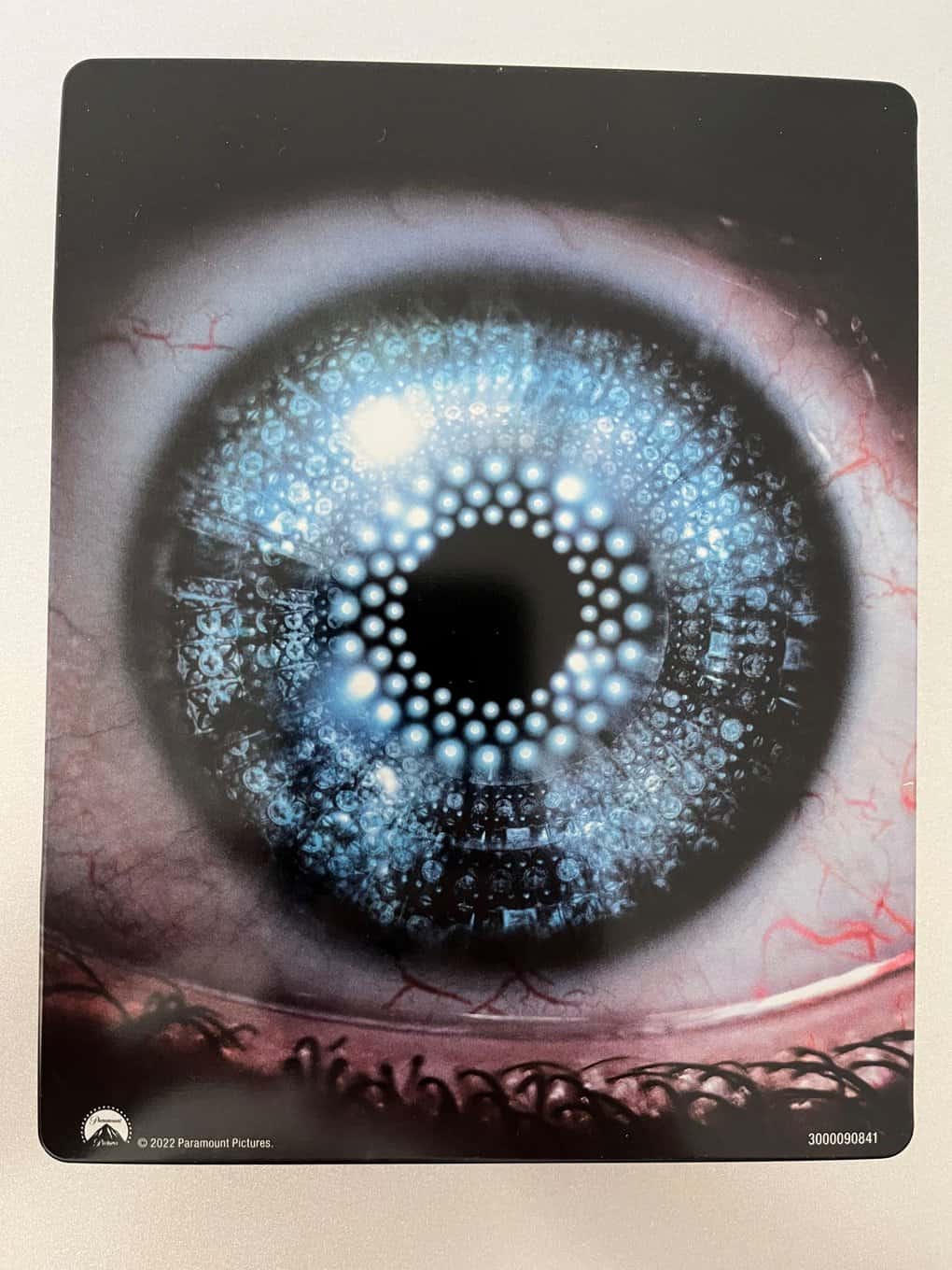 On the inside we’ve got the heart of the ship, with the gravity drive and its first victim of sorts in Justin, who happens to stumble upon it when the team first enters the ship. On the other side of the case we’ve got the rest of the room that holds the gravity drive. It’s simple, but it’s probably one of the more important scenes that could work on the interior without it getting an R-rating for graphic imagery. As a whole I think it works, and I think the unbalanced placement of images on both sides adds to the vibe that the film is going for. 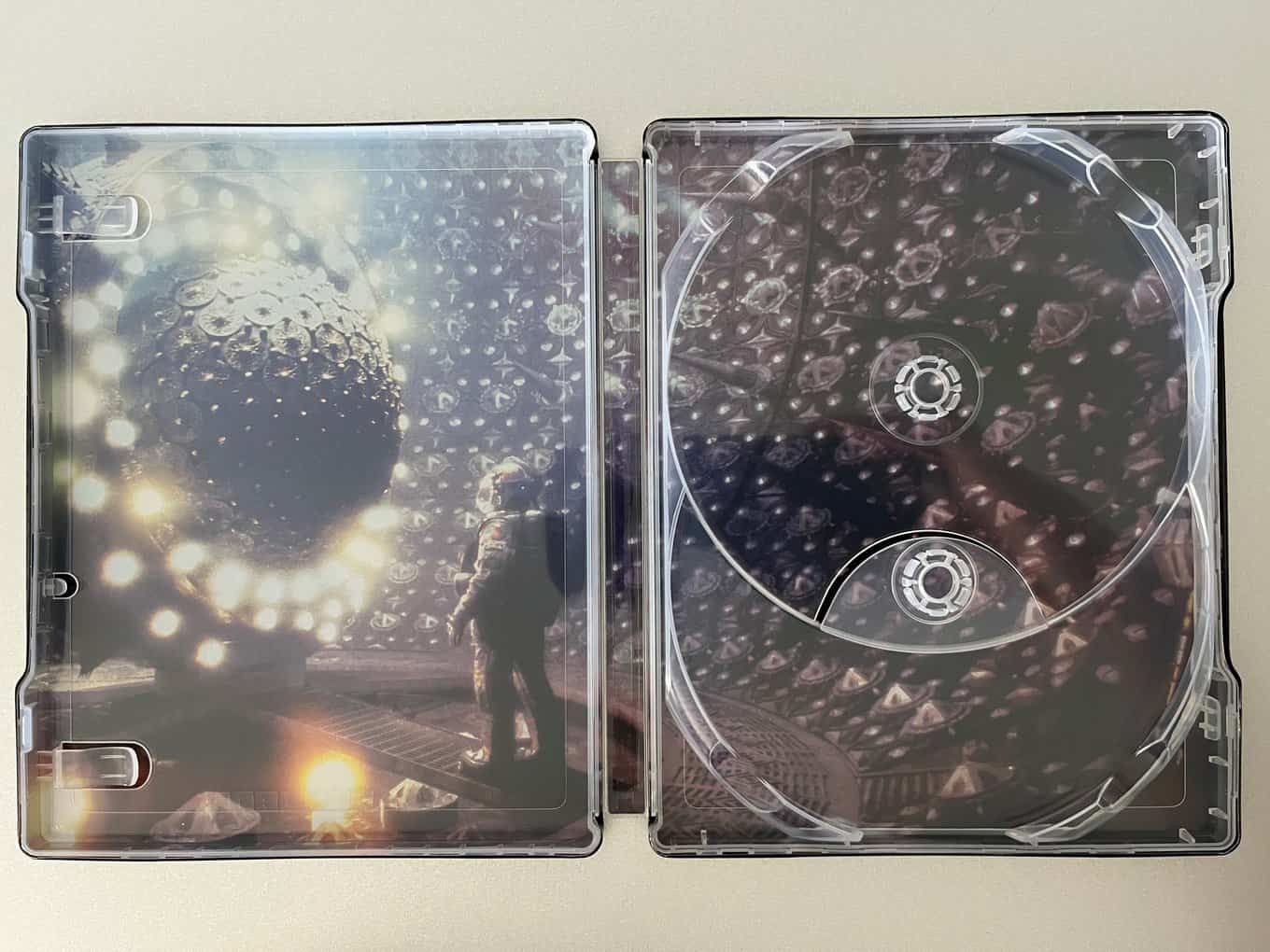 While the back of the case is kind of a miss for me, that isn’t something that makes or breaks it for me personally. The cover of Steelbooks tend to be the parts that get the most love, and this one works both with and without the slipcase. I prefer it with, as I think it just adds an extra layer visually (I mean, it literally adds another layer, but I’m talking from an artistic perspective) that you can pull away to reveal a fun image. The back is what it is, but I’d still give the Steelbook a passing grade and recommend it to fans of the film to add to their collection. 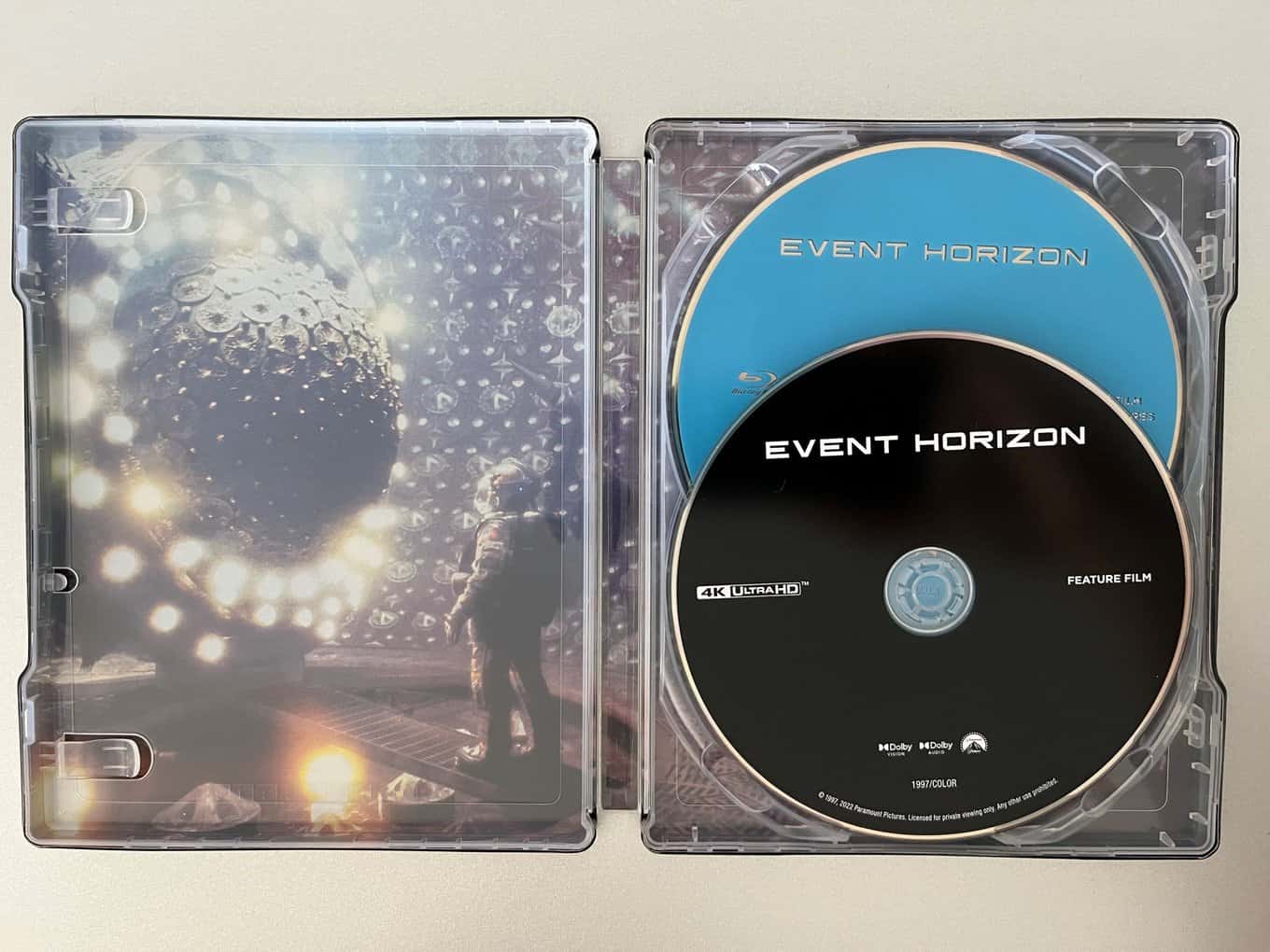 Now, I’ve had to have seen it since then, but there isn’t a recent viewing I can think of, so I’d have to say it’s been about 15 years. Now we’ve got the 25th anniversary 4K release of the film and it was the perfect excuse to dive back into deep space and see how the scares hold up. What’s great and remains strong is the film’s chilling atmosphere. The film begins with Dr. Weir (Sam Neill) having a nightmare that takes place aboard the Event Horizon – a ship that was built for interdimensional travel, but was lost while out on its maiden voyage. He wakes up in his bed aboard the rescue vessel Lewis and Clark and we’re introduced to the rest of the crew as they’re about to be placed into stasis for their journey ahead. The crew is friendly, but there’s just an ominous feeling at all times, greatly in part to the work of Neill, who just excels in his role in the film.

The crew of the Lewis and Clarke gives the film a solid variety of personalities. The cast is one of the film’s major selling points, as they really sell the terror that this crew is facing on this perilous rescue mission. Back when I was 16 the scares in this movie were nightmare fuel, and while the idea of the film still holds strong, the actual delivery of a lot of what was once unnerving no longer is. That’s not to say it’s poorly done, it’s just that we’ve become so desensitized to things in the decades since the film was released that the shock factor just isn’t there for the majority of things that take place.

That said, the film does still hold up in terms of concept. The idea that the ship accidentally travels to a dimension of pure and absolute evil so powerful that it not only causes the gruesome deaths of the entire crew, but also brings a sentience to the Event Horizon starship itself so that when it returns to our dimension seven years later it fires out a distress beacon to lure in fresh, unsuspecting prey is beyond creepy. While the repeat viewing scares may not be as strong, there may still be an age around when I first saw this where the concept alone may still be enough to have you keep a light on for the night.

That’s not to say that the film is poorly made, as it’s really not. The ship looks great, and it feels like these people are all trapped out in deep space. The acting is really great, and without question is the best thing the movie has going for it. Event Horizon would have been complete schlock with a lesser cast that didn’t sell and believe everything that Director Paul W.S. Anderson needed them to. One of the reasons for that is because there’s a lack of depth to the characters themselves. While they’re each given personalities that work in getting the audience invested enough to feel bad if they die, there’s never enough time given to anyone to cause an emotional connection to take place that causes their deaths to really hit home. The cast is great and the acting is the best it can be, but the characters still just feel like horror fodder, which is unfortunate.

While it didn’t do well at the box office, nor with critics, Event Horizon has earned its recognized place in the horror genre thanks to a cult following that’s grown over the years, and I can understand it. While the film will no longer keep me up at night, again, the concept is just so good and the thought of it so disturbing on its own that looking past some of the film’s flaws and just enjoying it for the diabolical thrill-ride to Hell that it aims to be is a completely logical – and arguably the smartest – way to go.

If you’re a fan of the film and are wondering if you should upgrade your Blu-ray to 4K the answer is yes. The 2160p/Dolby Vision transfer is the best the film has ever looked for home viewing, so this is the must-own copy of the film to have for those who want this movie in their collection. The magnificent bump in quality from a grain perspective alone would be enough, but everything just looks so incredibly detailed and impressive that there truly is no way to go back to previous versions once this one has been seen.

We’ve got the same audio track from the 2008 Blu-ray, which is a Dolby TrueHD 5.1, and it works well enough for the movie. I’m not sure how much it would’ve cost to update it all to Dolby Atmos, but the previous audio track works well enough, and with the visual improvements it feels enhanced just by piggybacking off of the impressive upgrade that the 4K picture delivers. It’s not a mind-blowing track, but it’ll suffice.

The Making of Event Horizon – This is an older release, as are all the special features; however, this is one of the best extras and the type that all movie fans hope their favourite movies will receive when they hit home video. This is 5-part documentary that’s longer than the movie! That’s right, it’s an hour and forty-three minutes long, and it covers…well, it covers everything. If you’re a fan of the film – or moviemaking in general – this is worth hunting down to watch!

The Point of No Return: The Filming of Event Horizon – This is an 8-minute featurette broken up into four parts, which sees Anderson discuss certain scenes in the film.

Secrets – We’ve got some deleted scenes with director’s commentary here for those interested.

The Unseen Event Horizon – We’ve got a pair of featurettes that showcase storyboard images and concept art that were made for the film, some showcasing scenes that never made the cut with director’s commentary also.

Brendan Campbell was here when Inside Pulse Movies began, and he’ll be here when it finishes - in 2012, when a cataclysmic event wipes out the servers, as well as everyone else on the planet other than John Cusack and those close to him. Brendan’s the #1 supporter of Keanu Reeves, a huge fan of popcorn flicks and a firm believer that sheer entertainment can take a film a long way. He currently resides in Canada, where, for reasons stated above, he’s attempting to get closer to John Cusack.
More from this author