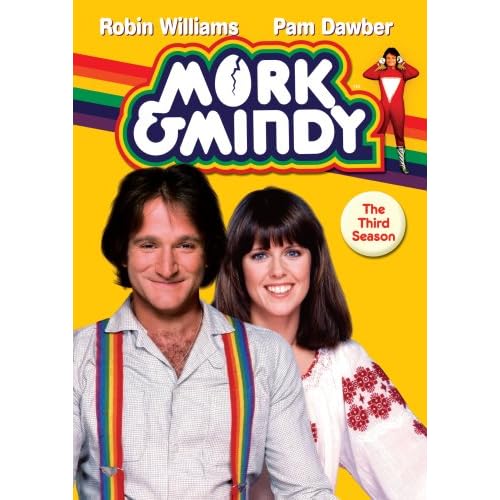 Mindy is the clerk of a music store and just trying to make it through life everyday in Colorado. Soon she ends up befriending a very strange person by the name of Mork who just so happens to be from another planet, Ork. He once tried to kidnap Richie on Happy Days and seemed popular enough to get a lot more airtime so now he and Mindy are together and living life in oddball ways.

That line about Richie is apparently the selling point on the back of the DVD cover and let me tell you, it shouldn’t work on anyone. I was too young to catch Mork & Mindy when it first aired and I’m beginning to wonder when the last time I saw a rerun was too because I have to know, has it always been this unenjoyable? There’s just really nothing that is funny about it or even anything that made me want to keep watching, but I pushed forward and suffered through all the episodes so you shouldn’t have to.

Don’t get me wrong, there are a few things here and there that are some funny moments every once in a while. I’ve always been a fan of Robin Williams, his stand-up, and his films. Sure he’s calmed it down a bit over the years, but it’s also been revealed that he was on a lot of drugs back in the day. Those truths are evident in particular episodes when you realize just how off the wall he used to be. He goes completely insane in some moments with the squeaky voices, fast talking, and just all around goofiness. It is amusing, but gets old really fast. One episode that would probably make him trip out, and is actually pretty good, is “Mork Meets Robin Williams.” Eventually it kinda ends up the way you would have expected, but getting a double dip of Williams actually proves to be more amusing then annoying as I thought it would be.

Makes me wonder now if the first two seasons were just as dull as this one was. It’s no wonder why it stayed on the air though because back in the seventies and early eighties, this kind of comedy was considered edgy and new. Today this kind of series wouldn’t make it to midseason before it got the cancellation axe, but it fit right in with Happy Days and Laverne & Shirley, especially when there were some crossover episodes. But if you happen to pick up a single season of Mork & Mindy, you’ll quickly learn why it lasted the least amount of seasons out of all three.

Gunfight In The Morkay Corral
Mork’s New Look
Alas, Poor Mork, We Knew Him Well
Mork And The Bum Rap
Mindy Gets Her Job

The episodes are shown in Full Frame format and are really showing their age considering they are getting close to thirty years old. They look almost exactly as I have seen them in reruns on Nick-At-Nite and don’t appear to have been touched up whatsoever.

The episodes are heard in Dolby Digital Mono Sound and it comes through fine for what it is. All that needs to be heard is the dialogue and it can be heard well enough unfortunately.

With no special features and episodes that are sure to bore, the third season of Mork & Mindy is definitely one to just skip entirely. For no reason at all would you ever want to purchase an entire season of this show because I doubt you could stand sitting still for more then one episode at a time. And if the urge to see even that many jumps up and bites you, then flip to Nickeloden and check out a rerun. If you’re looking for Robin Williams before he calmed down a bit, then be sure to check out his stand-up routine “Live At The Met” from 1986. He even goes deep into the subject of drugs, especially cocaine, and it is absolutely hilarious and an explanation of why on Earth he ever took the role of Mork. Na-nu, Na-NO!