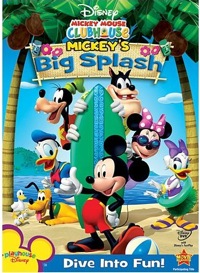 Mickey Mouse, Minnie Mouse, Donald Duck, Daisy Duck, Pluto, Goofy and that whole gang have been around for most of the 20th century. They entertained kids of all ages for the past 4 or 5 generations. But in the 21st century, Mickey and his friends have started to decline in popularity for young kids. Sure, we all love going to Disney World, but there hasn’t really been a series of cartoons featuring Mickey Mouse that targeted pre-school aged viewers in quite some time. That was until the Disney Channel created Mickey Mouse Clubhouse in 2006.

Mickey Mouse Clubhouse is the centerpiece of the Disney Channel’s Playhouse Disney lineup of shows for preschoolers. This computer animated show follows the adventures of Mickey and Minnie Mouse, Donald and Daisy Duck, Pluto, and Goofy. In each episode, the gang must solve a problem that challenges its young viewers to think creatively while learning about shapes, colors, and numbers. Every episode follows a strict format. Each episode starts off with Mickey Mouse walking down a wooded path. He then encourages his young fans to chant “Meeska, mooska, Mickey Mouse!” unleashing the magical Mickey Mouse-shaped clubhouse from its underground hiding place. After that, Mickey and the gang are faced with the problem at the center of the episode’s drama, and the Mousekadoer computer creates a quartet of Mousekatools to help solve the problem. Mickey then leads the group through a series of problem-solving steps, calling for a Mousekatool whenever the team arrives at an impasse. Once the problem is solved, Mickey and friends Mousekadance to the “Hot Dog” song by They Might Be Giants as the end credits roll.

Mickey’s Big Splash is Disney’s fifth Mickey Mouse Clubhouse DVD that they have released. There are four 24-minute episodes that are loosely tied together by all having the theme of summer, of course. There is one episode from the series’ first season and one episode from the series’ second season. The other two episodes, “Donald’s Ducks” and “Pete’s Beach Blanket Luau”, have not aired on television yet so they could be considered “bonus” episodes. Besides Donald Duck and Pete get starring roles in those two episodes, Mickey Mouse and Pluto star in the other two episodes. That doesn’t mean you won’t see Minnie Mouse, Daisy Duck, and Goofy, among others in these episodes.

Today’s parents love to keep their kids entertained with various TV shows and/or DVDs. But they love those shows and DVDs even more when they are both educational and entertaining. Mickey Mouse Clubhouse is the top rated show on Disney for kids under 5, and it’s easy to see why. This series is one of the few preschooler shows that focuses on teaching math curriculum. The episodes on Mickey’s Big Splash are no exception, as they help preschoolers with math concepts like counting, sorting, shape recognition, and less vs. more. As an added bonus, kids will also learn a couple of fun Hawaiian words as they party along with Mickey and the gang.

Mickey Mouse Clubhouse is a great television series for young kids. It not only is extremely educational and entertaining, but it also introduces a new generation of kids to the timeless Disney characters of Mickey Mouse, Minnie Mouse, Donald Duck, Daisy Duck, Pluto, Goofy, and the other characters that have gotten less Disney publicity over recent years. Mickey’s Big Splash is perhaps one of the better DVD releases from this series so far. It’s definitely not for adults without young kids. If you are over the age of 7, you probably won’t be challenged much. But for parents with young kids, this is the perfect DVD set to buy to keep them entertained for a hour and a half.

Episode 1 – Donald’s Ducks
A pack of eight non-anthropomorphic ducks show up at the Clubhouse, needing guidance to get to the beach for their winter migration. In addition to teaching them how to fly, Mickey and Donald must feed them and keep track of them. A bullhorn, a giant marshmallow, a siren, and the mystery Mousekatool are sure to come in handy.

Episode 2 – Pluto’s Bubble Bath
Clarabelle Cow and her dog Bella are coming over to the Clubhouse for a tea, biscuits, and dog biscuits party. To get ready, Pluto gets a bubble bath, and he and Mickey wind up floating away in bubbles and requiring navigational help. Mickey and Minnie must use six rubber duckies, a bath towel, a blow drier, and the mystery Mousekatool to clean Pluto and the clubhouse.

Episode 3 – Mickey Goes Fishing
Goofy goes away on a safari vacation, leaving his cat Mr. Pettibone in the care of Mickey. When the cat runs out of food, Mickey and Pluto take him to Star Lake, where they rent a boat from Pete and go fishing for Big Red Gooey fish. To aid in their task, the Mousekadoer provides a fishing rod, binoculars, a pair of oars, and the mystery Mousekatool.

Episode 4 – Pete’s Beach Blanket Luau
It’s the hottest day of the year and Pete invites everyone down to Star Lake for a cool beach blanket luau. There, they’ve got to clean up the beach, recycle, find sand that isn’t too hot, mend their umbrella, and make waves for surfing. In other words, it’s the perfect beach blast. Mickey, Goofy, and Pluto must use an elephant in a bikini, a red wagon, two thermometers, and the mystery Mousekatool to get Pete’s party off to a good start.

The video is given in fullscreen color with an aspect ratio of 1.33:1. The show looks better on DVD than on broadcast television. The colors are vivid and colorful, which only helps to keep kids entertained. No major or minor problems at all.

“Fun in the Sun with Mickey and the Gang” Activities –
There are three short, simple set-top activities that kids can play using the DVD player’s remote control. In the first one, you customize a Tiki mask and backdrop out of four different variables. The second game asks you to identify three things that Donald needlessly packed for the beach party. The third quizzes you on what’s cold and what’s hot with nonsensical thermometer readings supplying clues. For the latter two, the questions sometime differ on return visits, which you are invited to make. More fun for kids.

It’s really simple. If you have kids under the age of 7, you need to purchase this DVD set for a variety of reasons. Everyone else should take a pass on this. That’s not to say that this DVD set isn’t a great DVD, because it is. It’s just completely targeted at young kids, so unless you have to review this DVD, there is no reason to watch it if you are over the age of 7.