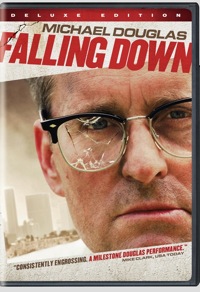 The human mind can be very fragile. Every day people are pushed to the limits of sanity as they encounter various people and situations. Vigilante films, made famous by Charles Bronson and his Death Wish films, have been around for years, and have succeeded in providing audiences escapism entertainment. The heroes in these films do what you could never do in real life, but have at least thought about it at some point. But perhaps the vigilante film with the biggest cult following is Falling Down, starring Michael Douglas. Even after 15 years, this film is remarkably, and unfortunately, relevant today.

In Falling Down, Michael Douglas plays “D-FENS”, a recently divorced and laid-off defense worker who finds himself stuck in LA traffic on a very hot day. His mounting frustration brings him to a breaking point where he abandons his car in traffic and begins an journey on foot that takes him across downtown Los Angeles on his way to his ex-wife (Barbara Hershey) and daughter’s home in Venice Beach. It is his daughter’s birthday and he fixates on seeing her despite the existence of a restraining order forbidding it. As D-FENS progresses through various downtown LA neighborhoods, he meets every bit of disrespect he encounters with increasingly violent outbursts, eventually acquiring a small arsenal of weapons from a group of unfortunate gang members who harassed him. All of the actions of D-FENS eventually attracts the attention of a veteran police detective on the eve of his retirement named Prendergast (Robert Duvall), who realized that the odd and seemingly unrelated incidents are the workings of a single man.

On the surface Falling Down is a modern take on a vigilante film. Viewers are able to escape real life and live vicariously through D-FENS for. At least for the first half of the film. That half is the black comedy part of the film. But then things go a little overboard. As D-FENS gets more and more violent, and reasons behind his attacks get less clear. It is here where the audience is unclear whether they should be cheering for D-FENS or not. In addition, we are at first supposed to believe that D-FENS is an ordinary man. But we eventually learn that D-FENS, whose real name is Bill Foster, has some deep emotional problems. So he really isn’t that normal after all.

The cast is what holds everything together, though. This is probably Michael Douglas’ best performance to date. He gives the character of D-FENS a life of its own, but at the same time he doesn’t go too far and make D-FENS a cartoon character. The foil to D-FENS is played equally well by Robert Duvall. He gets almost as much screen time as Douglas does. Unfortunately, Duvall’s character is pretty stereotypical. But you could argue that a completely sane character like Duvall is needed to balance things out. The supporting cast also do a good enough job with what they are given. Of course, most of the people that D-FENS encounter are nothing more than stereotypes themselves, but you can’t blame that on the actors.

Falling Down is not your typical vigilante film. It confronts issues that other similar films wouldn’t dare bring up. But it’s also a film that doesn’t know whether it’s a black comedy or a serious tale or urban angst. As a result, you never really know whether you should root for D-FENS or not. However, this mirrors the real world where things are never just black or just white. There are shades of grey everywhere. With all of this going on, Michael Douglas is still able to hold everything together. In the end, Falling Down is an underrated film that will entertain and make you think at the same time.

The video included is available in widescreen color presented at the 2:35 aspect ratio, which is enhanced for 16:9 TVs. The quality is great with minimal grain noticible. The colors seem true to the source material as well. The best this film is going to look on standard DVD. No major problems at all.

Audio Commentary –
There is a full-length audio commentary by Michael Douglas (star), Joel Schumacher (director), Ebbe Roe Smith (writer), Paul Hirsch (editor), Michael Paul Chan (actor), Vondie Curtis-Hall (actor), Frederick Forrest (actor), and Shawn Hubler (Los Angeles Times writer). This is really more of a compliation of various thoughts from the aforementioned people as an anonymous host introduces these participants. The Michael Douglas comments are from a 1993 interview. So this commentary is not as entertaining as it is insightful. But it is still worth checking out.

If you have never seen Falling Down, you should at least give it a rental, because it still rings true today. The only real extras on this deluxe edition DVD are an audio commentary and a Michael Douglas interview. Both are worth checking out for fans of the film, and it’s a slight recommendation for this version of the film even if you have the previous release.