Ladies and gentlemen, boys and girls, children of all ages, Inside Pulse Movies proudly presents your laughter filled entertainment for the weekend, Film Club! So, for the handful in attendance, and the MILLIONS reading around the world, let’s get ready to RUMBLE! Figuratively speaking, of course, as no actual punches will be thrown during this event, at least no physical punches, as the verbal throw downs are somewhat commonplace in this feature.

Last week we began our Christmas Edition of Film Club, and it continues on this week! Our judges have returned, and the stakes have been raised! This week, two triple threat matches will take place! One family oriented, and the other, well, let’s just say Mike Noyes had to ask permission to be able to watch the films involved so he could participate in the judgments!

With Christmas rapidly approaching, it’s time to put off the shopping once more in order to do what’s truly important, which is read this feature. Remember, if it comes right down to it, you can never go wrong with printouts of all the reviews found at Inside Pulse Movies from throughout the year. Pick up a hole punch, tie that stack of knowledgeable cinematic deliciousness together, whip up a quick cover page with a catchy title that goes something like “Who You Calling Cheap? Ink is Expensive!” and bam, gift of the year. Now that I’ve taken care of all your Christmas shopping worries, let’s get on with the show!

Our first match of the night is a Triple Header that’s fun for the whole family! There’s plenty of originality in all three of these films, and really, you can’t go wrong with the good, wholesome viewing that any of them will bring you and yours; however, this is Film Club, not Group Hug Club, so in the end, there has to be a victor. Judges! 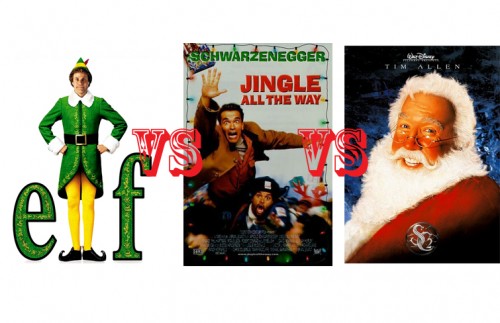 Jenny Rushing Alme – While I love Tim Allen in The Santa Clause and I love Arnold Schwarzenegger in…well, everything, and I tend to hate Will Ferrell in…well, everything… I’m going with ELF. It’s become a classic in it’s few short years and one my kids ask to watch every Christmas. We also love Zooey Deschanel and the “Baby It’s Cold Outside” scene.

Does your husband know about your Arnie crush? Does he also know that at the staff Christmas party that we had over AIM that you called him your real life Will Farrell? At first I thought it was a compliment, and that he was a tall, funny, former college pimp, but now the truth seems to me coming to light…it also explains why you said you were planning on moving to California now that “someone has more free time without all the politics,” and why you asked for night vision goggles and binoculars for Christmas. Interesting Jenny…very interesting. Family movies indeed!

Scott “Kubryk” Sawitz – If you actually watch all three of these films in a row, 2/3 of the time you will end up as a diabetic. But out of all these, Elf has something more to it than a vapid family film. The film has heart, which is more than the other two.

I don’t know what films you watched sir, but if a movie that has a father who would continuously beat down another father all so that he could buy his son’s love with a piece of plastic, or go and flat out murder Santa on Christmas aren’t filled with heart, then I just don’t know what is!

Josh Begley – Elf is a great Christmas movie. My only complaint is that there wasn’t enough Bob Newhart.

I’ve actually seen an alternate ending where they cut to a darkened bedroom, and Bob wakes up next to Suzanne Pleshette explaining all that just happened in the film, before she calms him down and they go back to sleep, with everything having been a dream the entire time.

Mike Noyes – This one is no contest. Elf is hilarious and I love watching it every year. Both Will Farrell and Zooey Deschanel shine in this film! For me, Elf really brings out spirit of Christmas! The other two aren’t even really worth talking about. 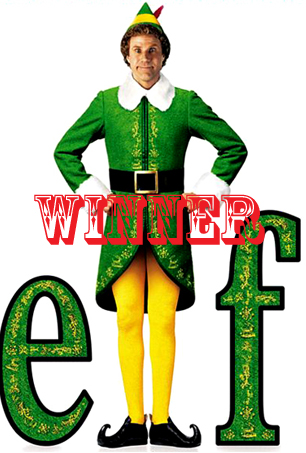 Next up we have two classics going head to head! While one is more recent than the other, they’re both still old enough to have earned their stripes as must-see films come Christmas…and I mean that more because they’re actually on every channel for days on end more than them being films you go out of your way to watch. Judges! 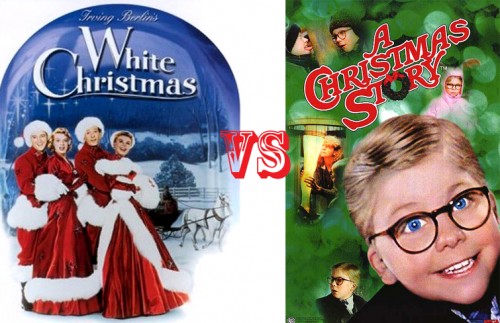 Mike Noyes – Damn, this is a hard one. A Christmas Story is one of the funniest Christmas films around with dozens of classic quotable lines. I say “Fragile, it must be Italian!” about once a week. However, White Christmas is classic in the truest sense of the word. It really doesn’t get much better than Bing Crosby singing Christmas songs. And where else are you going to see Der Bingle in drag? Okay… I choose…. grrrrr…. arg…. blah…. okay. fine. I will pick the very best film and you are not it! Wait, that didn’t really work did it. Okay fine… I choose: White Christmas. I just love me some classics.

It may actually be more fun to get a video of judges responses, and pit classics against one another week after week and just watch Mike slowly go insane right before our very eyes. Seems to me that it wouldn’t take very long to hit that point, as he has a very fragile personality…he must be Italian.

Josh Begley – A Christmas Story. This is the Christmas movie for me. It’s the one that I associate the most with my childhood, and it’s the one that I enjoy just as much today as I did then. I actually consider this to be an all-around perfect movie.

I’m going to keep this short and sweet Josh, and just come right out and ask it…you have a lamp shaped as a leg, don’t you?

Jenny Rushing Alme – A Christmas Story is a classic to everyone BUT me. I never watched it as a kid and never even knew about it’s existence until I was in high school. White Christmas however is a family tradition. I sing the songs year round, especially “Sisters”. Danny Kaye and Bing Crosby are phenomenal and Rosemary Clooney is absolutely gorgeous. I always wanted her dress that she wears when she sings “You Didn’t Do Right By Me”. (I even reviewed it for Inside Pulse. Insert link, please!)

Oh Jenny, I feel like the radio DJ who has someone call in and say “I’d like to request a song, and can I dedicate it to Kendra?” and they respond with, “You just did!” Because if I link your review of the film here, then I’m going to have to start doing it for everyone who requests their review to be linked, and I’m afraid that’s just too much work for me to deal with! Sorry.

Well, the classics stepped into the squared circle, and Bing Crosby shot Ralphie’s eye out in order to take the prize! Sure, it was likely overkill, and he probably could’ve just pressed the kid’s tongue against a pole and taken him out that way, but you can’t say the boy wasn’t warned time and time again! 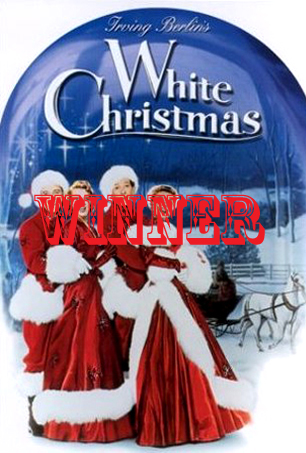 Finally, we hit our main event! It’s another triple threat match, this time with three films that are aimed more at the older holiday crowds! It’s Bill Murray taking on Chevy Chase and Billy Bob Thorton, and in the end there can only be one winner, and that’s the one who’s been with Angelina Jolie, but aside from that, let’s see which film our judges like most! 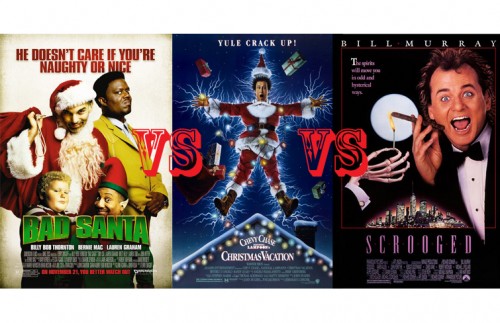 Scott “Kubryk” Sawitz – Bad Santa is so remarkably vile and evil that it’s easily one of my favorite films.

That’s…good Scott. At least you have good reasoning, and have explained in detail exactly what charming points of Bad Santa make you love it so. What do you mean “Why are you slowly backing away from me?” Silly, silly Scott, I’m not – hey, what’s that behind you? /Vanish

Jenny Rushing Alme – “We’re gonna have the hap hap happiest Christmas since Bing Crosby tap danced with Danny FUCKING Kaye!” The Griswold’s are every family and Christmas Vacation is required holiday viewing, plain and simple. Who DOESN’T love that theme song? “Grace? She passed away thirty years ago!”

Did I put a language warning at the top of this feature? I didn’t? Oh boy…this could get us in some hot water. Is it too late to write NSFW?

Mike Noyes – This is a pretty tough one too. Bad Santa was pretty funny, but easily the weakest of the three. Christmas Vacation is a modern classic that I love watching every year. Chevy Chase and crew are all so damn funny in this film. However, this one has to go to Scrooged which not only is one of my favorite Christmas films of all time, but one of my favorite films period. This is one of Bill Murray’s finest performances and easily my favorite telling of the Scrooge story.

Interesting…in all this talk about these three films, I’ve walked away with the understanding that you, Mike Noyes, have something against Michael Caine. That’s right, I can read between the lines, and I saw all the shots you were taking at Caine that you thought we’d all miss. I’m onto you sir, you sneaky sneaker you. And just for clarification, I wasn’t actually calling you a sneaky shoe there, nor was I implying you started in a movie with Robert Redford, I was really just trying to push how sneaky I think you are. Oh, you all got that without this explanation? Right, okay, good.

Josh Begley – Scrooged: I’ll give you two reasons why this one wins: Bill Murray and Carol Kane.

I’ll give you two reasons why the film won: Josh Begley and Mike Noyes. That’s right, you two took the split decision of our other judges and swerved it to your advantage, allowing Bill Murray the win, leaving Chevy Chase humbled, and Thorton…oh, who are we kidding, he was with Angelina Jolie. 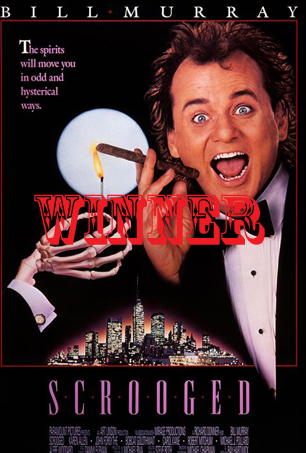 That’s all for this week! Next week we have some more classic bouts, with cartoons entering the fray, and likely more hatred of the English by our own Mike Noyes. For shame Mike, for shame.

Brendan Campbell was here when Inside Pulse Movies began, and he’ll be here when it finishes - in 2012, when a cataclysmic event wipes out the servers, as well as everyone else on the planet other than John Cusack and those close to him. Brendan’s the #1 supporter of Keanu Reeves, a huge fan of popcorn flicks and a firm believer that sheer entertainment can take a film a long way. He currently resides in Canada, where, for reasons stated above, he’s attempting to get closer to John Cusack.
More from this author