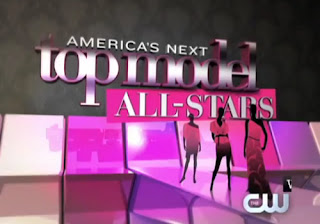 Well hi again, ANTM fans! I hope you’re excited, because it looks like we’re in for quite a ride on America’s Next Top Model this “cycle” – it’s an all-stars version! And it started off with a classic kooky Tyra video – I wouldn’t have had it any other way. (By the way, why no Emmy Awards love for Miss Tyra? She could have been nominated for reality, comedy sketches, hosting…)

For the first photo shoot, all the girls posed as exaggerated caricatures of their personas from previous cycles. (Those are actually the photos you’ll see in the helpful gallery, linked above.) Proving some things never change, Shannon (famous for refusing to pose nude) refused to pose in lingerie and instead selected even skimpier bikini bottoms, because at least those are meant for outdoor use. Huh. It was an odd battle to choose, and no one seemed to understand her reasoning (myself included). 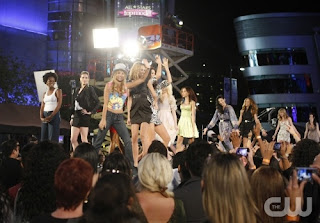 Next, the girls had to walk down a runway and be judged in front of a live audience, with special guest judge and “the biggest female rapper of our time”, Lil Kim Missy Elliot Eve Nicki Minaj. Oh boy. Clearly, Bre, you and I are not of the same time. You probably think that Ke$ha is the biggest pop star ever, don’t you?

The judging was less runway and more VMAs entrance, but whatevs. My favorite photos came from Allison (of course, love that wacky chick), and Laura (again, obviously, but she’s just so charming!) and Dominique, who I’ve always thought has a really strong, interesting look.

I felt really bad for Alexandria, who was booed by the audience. I mean, it was pretty justified – she was atrocious last season. But still, it’s just because she’s the villain freshest in everyone’s minds, and I felt for her.

Unfortunately for Alexandria, she also had one of the weakest photos. I also wasn’t impressed by Shannon (and I hate to say it, but she’s getting a little on in years for this, isn’t she?), Brittany or Bre.

I was surprised when, at the actual panel, Isis was selected for best photo. I thought her photo was good, but I would have placed it more middle of the pack. Next Allison was called, followed by Camille, Lisa, Angelea, Laura, Bre, Bianca, Shannon, Dominique, Sheena and Kayla. That left Alexandria and Brittany in the bottom two – and I was surprised by either girl’s position there.

Alexandria was saved, because she’s much more memorable than Brittany. Alexandria got a huge, polarizing reaction from the crowd while no one even knew who Brittany was.

So, did you watch the first episode of ANTM: All-Stars? Who are you rooting for? Let me know in the comments section, and see you guys next week for even more crazy model drama!