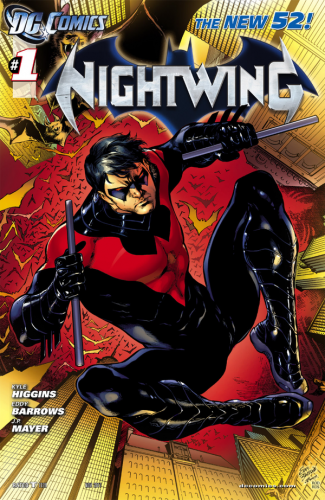 Kyle Higgins and Eddy Barrows brought back Nightwing with the DC relaunch, the Dick Grayson character having spent the previous year as the Batman of Gotham.  Despite huge commercial and critical success, Bruce Wayne is back in the cowl, while Dick goes back to his previous identity, but stays in Gotham.  Can the new creative team match the quality of the previous run on this character?  It’s early, but the results thus far are good.

Over the past several years, if not longer, Grayson ahs become one of the more likable characters in comics.  He’s got a human outlook to an absolutely crazy life, grounded by fears and concerns that are, symbolically at least, easy to relate to.  That element of Grayson’s character remains both present and important in this new incarnation, as his original circus is back in town, love interest included, and Grayson is scared that Gotham will warp what he looks back upon so happily.  Given what Gotham is, it’s easy to understand, and it’s really good to see the city itself playing such an impressive role in the comic early.  Furthering this is that Dick himself has moved to the worst part of the city, feeling more at home away from the glamour or Wayne Manor or his previous loft.  He’s still part of the Bat Family’s network, but clearly doing things his own way.

In order to get across how he feels, the majority of the issue is shown with Dick’s internal monologue, whether in or out of costume.  Besides giving us a clear and consistent perspective, this also makes sure we know exactly how Nightwing feels about recent events, like where he’s staying and having been Batman… and yes, he was still Batman for a year.  He’s a likable character, so there’s also no real risk of him going obsessive or depressed like there is with Bruce Wayne in the same situation, and while he does make one pretty big mistake towards the end of the issue, it’s something superhero’s constantly do that makes little sense.  Having it come back to bite him adds to the more human vigilante feel.

The plot itself feels pretty stock – someone wants to kill Dick as he deals with his past – but the point of view and characterization are clearly the key elements here.  This book takes the idea that if we like and relate to Dick Grayson, we’ll be more interested in seeing him be Nightwing and succeed.  It’s actually much the same take as the current Mark Waid Daredevil run – not quite as good, but the same general idea – and it works very well.   I both like Dick Grayson and now want more of him as Nightwing.

The art in this one is actually excellent.  Eddy Barrows doesn’t do anything fancy when the titular character isn’t in costume – it’s fairly standard panel layout.  There’s a lot going on, this isn’t slow paced, so it helps that the storytelling is clear, but it’s still your standard, good superhero fare.  When Dick is Nightwing, however, things take a big step forward.  In come the dynamic panel layouts and visual effects to get across how effortlessly and impressively Nightwing and, at some points, his opponent can move.  This different style really makes the Nightwing parts stand out as worth looking forward to.

Nightwing is, at the end of the day, a fairly recognizable story about Dick Grayson’s past and dealing with the insanity of Gotham, but in doing so it helps create a strong enough character that Dick is likable and the reader is left pulling for him to succeed despite the familiarity of the material.  In addition, with the art ramping up for the Nightwing scenes, the comic gives you something to look forward to when someone attacks Grayson.  The tease here is a bit similar to that of Batman #1, but that’s on editorial, not Barrows and Higgins.  As of now for this creative team, I’m on board for their vision of the character. 8/10.