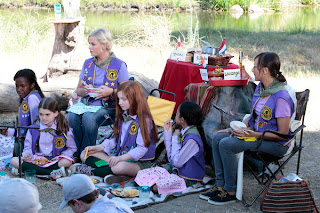 I love episodes of sitcoms where we get to see different characters interact, and in last night’s episode of Parks and Recreation I especially enjoyed watching Donna, Tom and Ben spend the day together. With Tom no longer working in the Parks Department (at least for now), I think the show has done a great job of keeping him around – this time, by introducing us to his and Donna’s annual “Treat Yo Self!” day.

But more on that in a minute – the main storyline from this episode revolved around Leslie and Ron’s dueling Scouts-like ranger groups.

Back in the day, Leslie Knope had wanted to join the Pawnee Rangers – but it was No Girls Allowed. But Knope never takes nope for an answer, so she grew up to establish a rival group for girls called the Pawnee Goddesses. While Ron took his boys on a roughin’ it style camping trip, Leslie took her girls on a nearby super-fun camping trip, complete with puppies and candy.

Obviously, it didn’t take long for all the boys from Ron’s group (including Andy) to beg to join Leslie’s group. She was hesitant to let them in, but a few Knopes-in-training called her on her hypocrisy and staged a public forum on the subject. The boys were in (they even took the Goddesses’ very effeminate pledge) and Ron was out in the cold, all by himself.

There were so many great little touches here, from the way Ann just couldn’t manage to impress those kids, to Leslie awarding herself the “Prettiest Eyes” badge she’d always wanted as “a placeholder” for something else, to Leslie’s list of planned activities which included a puppet show on the Bill of Rights set to the tune of “Party In The USA” and a S’mores-off.

Ron left the camping trip the next day, but Leslie managed to bring some joy back to his love to joyless camping by placing an ad for kids who wanted to be part of a hardcore outdoorsy group. Ron was greeted in his office by a group of intrepid boys and girls who were ready to prove their worth using only a plastic sheet and a cardboard box.

Meanwhile, after noticing that Ben seemed down in the dumps, Donna insisted that she and Tom bring him along on their annual day of indulgence. There was so much to love about this storyline – particularly the fact that Tom, the king of self-indulgence, would feel the need to make a special day for it.

Ben really needed to treat himself, too – since he could no longer be with Leslie, he was questioning what he was even doing in Pawnee anymore. I mean, he was eating soup alone on a bench – that’s just terrible. At first, Ben had a hard time relaxing. The acupuncture session he got at the spa just stressed him out, and all he bought at the fancy Eagleton mall was a pack of white tube socks. Not very fun or whimsical at all. But Donna knew what to do – he had to treat himself to something Ben style, and that meant a trip to the nerd store.

I loved that the one thing Ben was willing to indulge on was a crazy Batman costume. But he was so happy to finally treat himself to something that he broke down in tears. It was awkward. As if this storyline wasn’t already amazing (Tom is a velvet-cashmere candy cane!), it was definitely worth it for that final scene where Ben swept around the apartment in his Batman getup, fixing the Internet router for April and Andy. Also, it was nice to see Donna get some more screen time than usual – she was hilarious.

Don’t talk about sex! That’s the only rule! Who would’ve thought that Jerry could produce the female version of Chris Traeger? Chris accompanied Jerry and his daughter on their lunch date (he reevaluated his initial rejection of the invitation once he saw Jerry’s hot, adult daughter) and it turned out that they were literally a match made in heaven. Chris went way overboard when asking Jerry’s permission to date his daughter – and then gave TMI when he later told Jerry their first date was a success and Millicent had spent the night with him. I loved seeing Jerry eventually give in to Chris’s bear hug.

Overall, yet another outstanding episode of Parks and Rec, don’t you think? Check out my list of highlights below and share some of your favorites in the comments section!