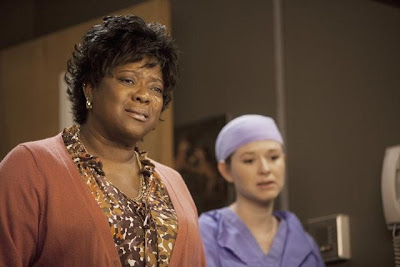 So here’s a piece of advice: Don’t watch Grey’s Anatomy online at your desk during lunch, because if you do you may find yourself tearing up at work. Not because Dr. Richard Webber is singing “My Funny Valentine” to his wife, who has Alzheimer’s, while he’s in the OR. Obviously not because of that. Because while I was watching the show I choked on my salad. I mean, er, that story’s not even about me, it’s about my friend Susie. Anyway, yeah.

Continuing it’s streak of good episodes, Grey’s Anatomy was really great last night. “Hope for the Hopeless” had a bunch of good storylines, and brought up some lingering drama from earlier in the season.

1) Derek and Lexie were to operate on a young boy with an inoperable tumor. His mom had been turned down by eight other surgeons, so it was Magical McDreamy to the rescue. I’d been a little annoyed in the past about how Derek seemed to be performing weekly miracle surgeries, so I was actually happy that this storyline had a rather sad outcome. Cruel, I know. Once Derek opened the kid up, he realized that the 5% chance of survival he thought existed wasn’t real, and he refused to operate. The twist? The kid’s mom hadn’t told him he had a tumor, but the kid knew anyway. Lexie knew that, and she was pretty upset to find out that Derek wasn’t even going to try to save the boy’s life. But without any hope for survival, it was better to give the kid three more months of visiting old battle sites with his mom.

2) Meanwhile, Meredith and Bailey were performing a liver transplant on two sisters, played by Nia Vardalos and Roz from Frasier. Roz wouldn’t cut Nia a break about the giant sacrifice she was making, and there were some funny eye-rolling moments, but mostly the storyline was a dud. If there was some kind of subtext here that tied into what else was going on, I didn’t see it. Meanwhile, Meredith spent the episode debating if she should declare general surgery as her area of expertise. Everyone said it was a no-brainer because of her mother’s legacy, which is exactly why she was hesitant. It wasn’t until Zola’s birthday party, when Richard told her that she’s nothing like her mother, that she was convinced.

3) Teddy continues to work like crazy following Henry’s death, and everyone in the hospital is giving her casseroles for being a widow. The surgery this week – a guy who impaled himself on a wrought iron fence during a bicycling accident – wasn’t that interesting, but the drama came from the fact that Teddy did it despite clear orders from Owen to go home and rest. That caused a lot of problems for Cristina and Owen, which I’ll get to.

4) And lastly, the episode marked Dr. Webber’s 10,000th surgery. Holy crap, that’s a lot. The surgery wasn’t anything special – I have a feeling that for such a milestone you’d want something simple, because nothing will put a damper on your 10,000th surgery celebration party like a dead patient. It was what happened that pulled my heartstrings.

Just as Dr. Webber started to operate, he was paged to the lobby. April went to see what was up, and it was Adele. She left home, wandering almost seven miles to get to the hospital in a state of confusion that her her thinking Richard was going to leave her for Ellis Grey. April brought her into the OR theater and, via the sound system, Richard tried to calm her down. Following some advice from Meredith, he tried to remind her of a happy memory by singing “My Funny Valentine”. There was some tremendous acting work from Loretta Devine, and it was basically one of the saddest things I’ve ever seen. Alzheimer’s runs in my family, so I’m rather sensitive to this storyline, but I think all can agree it was really damn touching.

Richard canceled his party, the one he’d asked Bailey all about at the beginning of the episode (red velvet cake with cream cheese icing is my favorite, too!), so that he could go home and care for his wife. Later, once she was lucid again, she insisted he go attend Zola’s first birthday party at Meredith’s house. I’ve always loved interactions with Richard and Meredith, and all their moments together at the party were warm and touching. A nice balance to the majority of the episode. Meredith presenting Richard with Zola’s birthday cake (which now just said “Yay” instead of “Yay Zola!”) for his 10,000th surgery was such a nice display of the relationship they’ve come to have.

The party was a great excuse for us to see all the doctors interacting in good and bad ways. We saw Callie and Arizona continue to tease Mark because he still hasn’t said “I love you” back to his hot girlfriend, but they laid off when he explained why he doesn’t want to rush things. I used to want him and Lexie to get back together, but now that I’ve seen the new girlfriend interact so well with Callie, Arizona and the baby I’m pretty on board with his new relationship.

With a new baby in the family, April, Alex and Avery decided it was time to move out of Meredith’s house. April originally wanted to get away from Alex and his gross one night stands, but she ended up settling on a three bedroom apartment for all of them. We’re meant to think this means she still has feelings for Alex (or at least, that’s what I assume) but I would MUCH rather it mean that she has a thing for Avery and didn’t want to move in with him alone.

Owen was still angry with Cristina at the party, supposedly over her insubordination in the whole surgery thing with Teddy. But when he saw her playing with Zola, I think we all knew there was much more to his anger than just a professional dispute. It all came out in the kitchen during the party, when they started yelling at each other about the surgery, and about how Cristina always gets what she wants, and how it always will come back to the abortion. And when Owen yelled “You killed our baby! You don’t ever forget that!” Uh-oh. I’m not sure there’s any hope of coming back from that. Cristina and Owen might be over for good, don’t you think? I can’t say I ever thought they were right together in the first place. Also, everyone at the party heard the fight. Yikes.

We won’t find out what happens there right away. The next episode is called “If/Then” and is an imaginary “What if?” situation. Personally, I’m really intrigued by that idea. What do you guys think? Are you looking forward to that episode? What did you think of this week’s?