By now you probably know that I’m a big fan of CMT’s show Sweet Home Alabama, and that last season I had the opportunity to chat with Tribble Reese a few times about the show.

SWA has just entered its third season, and the Southern belle choosing among the city and country guys this round is Paige Duke. I got to chat with Paige today about what’s happened on the show so far and what we have to look forward to this Friday night. 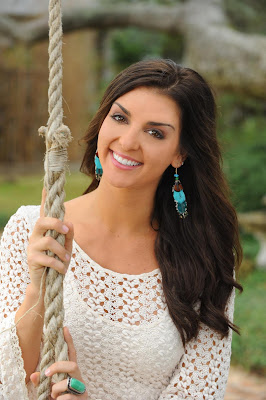 It turns out that Paige began filming her season of Sweet Home Alabama while the second season was still airing, so she had to keep her lips sealed that she was starring. On the previous season, Paige said she and Tribble ended on very good terms. “We both knew we were better off as friends,” she said. “Some of the girls were starting to develop strong feelings for him, so I knew I shouldn’t have stayed.”

Now Paige has 22 guys vying for her affections, and things have gotten pretty heated in the house!

“Honestly, I’m not that surprised by anything that I see,” Paige said. “I kind of knew, the guys would tell me what was going on and obviously it’s different to see it, but I kind of knew which guys would act the way that act.” Especially “Big Shaun” (obnoxious city guy from New York — my words, not Paige’s) who had some pretty rude things to say about the South in the first couple episodes.

“Big Shaun, he’s gotten under a lot of people’s skin.” Paige said that she didn’t like that Shaun described people from the South as drunk all the time or stupid, but she was glad he came on the show so that he could have his eyes opened. “It just shows his ignorance and not knowing any better. I just laugh it off, and don’t really get offended by anything.I think people will be interested to see how his character plays out and what happens there.”

It seems like the guys in the house have a more heated city vs. country rivalry than the girls did. Paige agreed, and said she thinks guys are more fun to watch than girls. “Guys can punch each other in the face and the next day they’re over it,” she said. “The girls, we were more concerned about saying the right thing or hurting someone’s feelings. Ashley Ann, no one really liked her and so there was always tension in the house.”

But, obviously, there are bound to be conflicts. “You know, there’s 22 guys in a three bedroom house with no Internet, radio, TV, or anything. You’re just talking about your emotions and they’re becoming friends, some of them become like brothers, but you’re all dating the same girl, so it’s hard.”

Paige said the ages of the guys in the house vary, but that it’s not a big factor for her. “I’m 24, and I guess Shaun was the youngest at 21, so he’s only three years younger than me. And Bubba was 30, I think he was the oldest. The older the guy, it doesn’t really matter. So no, age doesn’t really play a role, as long as the guy is successful and has his life together, and could sort of take care of me.”

On last Friday’s episode Paige had to let three guys go, including David after they shared a pretty awkward-looking date. “I don’t think he was surprised,” Paige said. “We didn’t kiss, you know, and I didn’t hold his hand. He likes to talk, but there’s nothing wrong with that. He’s a really sweet guy, but with the cameras there I think he got nervous and just talked talked talked.”

Paige is really looking forward to this week’s episode, in which we’ll see the city guys and country guys go camping – Survivor style. “This is gonna be such a fun episode,” Paige told me. “They just drop two crates with everything they could need for the night – fully feathered chickens, fishing gear, tents, everything. I couldn’t stay overnight, I was there late with them but it was raining so I was OK with that. So I’m excited to see this too.”

We also get to see Paige go on dates with Jeremiah (my favorite!) and Joey this week. “The city guys gave Jeremiah a hard time for taking me out on the combine, one guy said ‘Where in the love manual does it say you should take a girl for a date on a tractor?’ but I guess he hasn’t heard the song “Big Green Tractor” by Jason Aldeen!”

Well, I don’t know about y’all, but I can’t wait to see all of that. Check back this weekend for a review of the third episode, and for now check out this hilarious clip – Jeremiah is my favorite so far, but Todd might be my favorite city guy now thanks to his dead-on impression of Boyd!