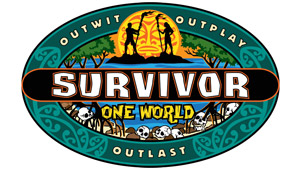 Survivor: One World premiered last night (I can’t tell y’all how much I was looking forward to it!) and it left me thinking one thing: maybe Coach, Little Hantz and the rest of last year’s God Squad really DID have a little help from the man upstairs. Because divine intervention was nowhere to be found during the first three days of this season.

I think we can probably all agree that the premiere was a little bit of a letdown. Half a challenge and no real Tribal Council? That’s just bad luck.

OK, let’s take this from the top. The tribes hit the beach for the first time, and Probst broke the news that this season would be a good old fashioned battle of the sexes. Immunity idols are in play, but Redemption Island isn’t – woohoo!  To quote my nemesis Courtney of Bachelor fame, “See ya! Wouldn’t wanna be ya!”

In a moment of ironic foreshadowing, Probst singles out Kourtney and asks her where she fits in with this crew. Um, as an extra on an episode of 2 Broke Girls, perhaps? Only the silliest of hipsters would show up on Survivor wearing a wool hat. “Nowhere,” Kourtney replied. Well, someone is off to a promising start! Had Kourtney not broken her wrist, I think there was a very good chance she would have been the first one out anyway.

Another cast member singled out is Greg, who immediately requests to be called “Tarzan”. And if that’s not bad enough, he pronounces it weird. Tarzan. And if THAT’S not bad enough, there’s another dude on his tribe who is absolutely crushed because HIS nickname is “Troyzan”! Oh no! What will be done? Ooh, hey, I have a suggestion: You both drop the stupid nicknames and go by Greg and Troy! 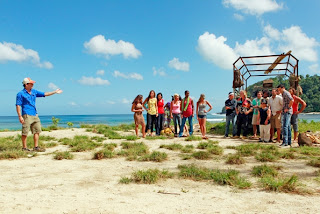 Finally, the games begin. (May the odds be ever in your favor!) The tribes have 60 seconds to grab all the supplies they can off a truck and, sadly, the women totally botch it. Michael the banker stole everything good out of the women’s pile while they ignored Probst’s advice to watch their items. Dirty? Yeah, sure. Good move? Maybe. It is only Day One. Maybe they’ll forget by the time they get to final Tribal Council. Or maybe, if Michael gets there, this is only the tip of the jackass iceberg and he’ll lose the million bucks. Only time will tell! 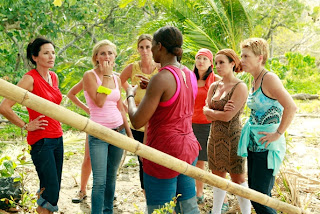 Anyone who saw last season knows that a tight core alliance can be your best friend in this game. And both tribes formed alliances really quickly tonight.

For the women, it’s Chelsea, Sabrina, Kat, Kim and Alicia. A pretty solid group, but I can see Alicia being a problem for them. For the guys it’s Bill, Jay, Matt, Michael and…oh wait, yeah, they only have four dudes. Fools! Matt gloated that they’d formed the “dominant alliance”. Sorry buddy, but if you’re in a group of four dudes on a tribe of nine people, then it’s the other guys who are dominating. Better pick up a fifth, stat!

As soon as each tribe got to their camps, they discovered what the big twist this season is – they’re living side by side, on one beach. I think this could be really fun. We’ve already got a fair bit of drama out of the situation, and I think that will increase exponentially as everyone starts going to Tribal Council more and the merge nears. 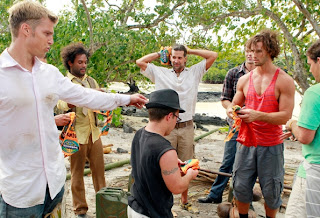 The first thing they had to deal with were chickens. The guys and girls made an agreement to work together to catch a couple chickens running around, and then share them no matter who’d done the actually catching. Country gal Chelsea caught TWO CHICKENS and, of course, the women weren’t about to just let one go. After all, these guys had stolen their axe, some firewood and a bunch of other items from them only a couple hours beforehand! They wanted to use the chickens to barter, but the guys weren’t really willing to negotiate.

Come on baby, light my fire

The next problem that arose was fire. The men built one pretty quickly, but the women just couldn’t get it together. This was disappointing – if you’re going on Survivor, the one thing you should absolutely do is learn how to make a fire. Hell, if I were an American I might have learned already, just in case I was picked to go on the show and didn’t have time to prepare! The women tried to offer the men a chicken in exchange for fire, but the men said no. It seemed like a pretty good deal, but I understand why the men didn’t take it – no fire means no water, and a dehydrated tribe won’t win the immunity challenge.

Just when I thought the women couldn’t get more pathetic, they did. In the dead of night, Christina and Monica steal an ember. Yes! Brilliant! Except, for whatever reason, the women couldn’t keep the fire lit. Sigh. What an epic fail.

From there, things got super weird – and Alicia confirmed my suspicions that she’ll be trouble this season. Christina brokered an agreement with the guys that they’d get fire in exchange for the women weaving 20 branches of palm fronds for the men. It sounded like a really good deal – better, in fact, than giving up one of their chickens. So why, then, did Alicia have such a fit? First, Alicia freaked out over where the weaving would take place. What does it matter? They’re like, five feet apart!

I cannot believe that this woman is a special needs teacher. She’s trashy, she’s rude, she has a temper. Was she recommended to the show by NaOnka or something? Yikes!

Meanwhile, Sabrina discovered a hidden immunity idol while poking around in the woods. In fact, she discovered it in the second place she looked. From what I could gather, the producers opted to hide the idol under a live rat. Guys, y’all have got to start hiding these things better! The twist, though? This idol was designated for the guys’ tribe, and since a woman found it she’d have to hand it over to someone before the next Tribal Council. And who should that person be? Well, the obvious choice was the one guy who’d been fraternizing with the girls since he arrived. 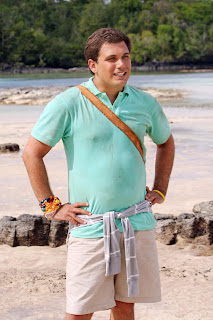 Colton. I can tell just from reading Colton’s bio that I won’t be a fan. A walking oxymoron (he’s a gay Republican – how is that even a thing?) and arrogant to boot, I didn’t get a good vibe from him. And his behavior during the first three days of the game shows he probably isn’t as good of a player as he thought. Look, I get it, he’d hatched a plan based on bonding with women and was disappointed to learn that the tribes were being divided by gender. But you’ve got to adapt, man! Colton spent way too much time buddying up to the women and not nearly enough time trying to endear himself to his fellow tribemates. Sure, it helped him in securing the idol but that was a pretty big fluke. 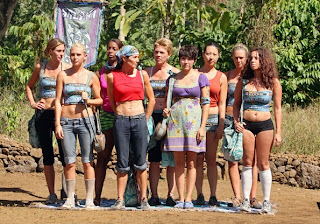 Bounce This Way, Not That Way

Challenge time! The first Immunity Challenge of the season looked like a fun one – a big obstacle course. Each tribe member would have to complete the three steps of the course – jumping onto a net, crossing a balance beam, and crossing a rope bridge. Sadly, we really only got to see the first step.

Were these people not paying attention during the safety training or something? Surely they were told in advance to keep their arms to their chests, not to land feet first, etc. Maybe it was just nerves, because so many people bounced wrong. Nina did a face plant which, by the next day, made her look “like she’d been on a date with Chris Brown,” to quote my boyfriend. (Obnoxious members of “Team Breezy”, please send your hate in his direction. Thanks.) But the real damage was done to Kourtney, who awkwardly landed on her arm. Kourtney was obviously hurt, but since she’d also been picked out as one of the weaker links very early in the game, it didn’t seem like her tribemates were very sympathetic. “It’s alright, It’s just bleeding,” snapped Kat who, I should remind you, does not know what the word “ambiance” means. Also, she sells timeshares, so you’d think the word to describe the atmosphere of a particular place would be in her limited vocabulary.

Before you knew it, Kourtney looked like she was going to faint and Probst paused the challenge to call in medical. They couldn’t tell if it was a sprain or a break, so they had to take her away for an X-Ray. Then Probst made the stupidest announcement of all: The men, who were in the lead, could choose to take a win or play out the rest of the challenge. Obviously, they took the win. That’s a no-brainer! I’m pretty sure even the Dragonslayer himself would have taken immunity.

But why was that an option? For the sake of the show, you’d think the producers would have wanted to finish out the challenge. Couldn’t they just make the women play someone twice, or told the men to select someone to sit out?

Even though it was looking pretty obvious that Kourtney was out of the game, the women still had to sit through a phony baloney Tribal Council. There was some bickering between Alicia and Christina, and then Probst announced that Kourtney’s wrist was broken in a few places and she’d need surgery. No one would be getting voted out.

Sure, this wasn’t a great episode. But that was due almost entirely to circumstance, not to a boring cast or lame twists. (Remember the Medallion of Power?) So even though it was a disappointment, I’m still looking forward to the rest of the season.

Now some of the loyal readers might remember that last season, I (and my boyfriend, Rob) won the Survivor office pool! And you better believe we’re going for back to back victories. (Chances that we’ll win again are low, since I played for years and years without ever winning. Also, I’m kinda rooting for my mom to win this year since she started the whole thing and is likely the only person who’s never won it.)

The way our pool works is that following the premiere episode, everyone ranks the players. Then our names are pulled out of a hat and you get to choose a person. So if you’re pulled last out of the hat, you’re stuck with whichever player no one wanted – but people have won that way before! Right now, I know that Kim, Chelsea and Bill stand out as people who should be near the top of my list. The bottom of the list will definitely include Alicia, Christina, Colton, Nina and Leif. (I like Leif, but people with disabilities who excel in the game tend to be targeted as threats early on. No one wants to sit next to them in the end.)

So what did you guys think of the episode? Do you like the cast? How do you feel about the one beach twist? Who are your favorites? Tell me in the comments, and see you next week!