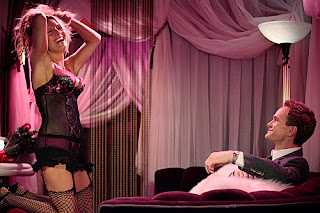 How I Met Your Mother has been hot and cold in recent seasons, delivering both fantastic storylines (Hi, Jason Segel…real glad you’re on this show) and toying with our hearts and minds, particularly when it comes to Ted and his relationships. (Hi, Zoey, wish you’d never been on this show.) But these last couple of episodes have my hopes high.

In last night’s episode, Ted ended up giving his apartment to Lily and Marshall. You’ll remember that, when the show began, the three of them lived there. Ted discovered via Robin that Lily and Marshall hated it in Long Island, and since he’d never taken their names off the lease he decided to give them the apartment.

I liked how this all tied together. I was getting tired of the Long Island jokes with lily and Marshall, and Ted not knowing how to fill Robin’s old room was a nice touch in his getting over Robin. Where is he going now? Will he finally move back into that house he bought – the one the show only remembers he owns about every 14 episodes? Or will he do something else?

I’m less sold on this Barney/Karma thing. Seeing a stripper take advantage of Barney just didn’t hit the right chord for me. I get what the show is doing – Barney has finally met his match, and that’s what makes him so attracted to Quinn/Karma. But are we really supposed to believe Barney is going to settle down with a stripper?

Barney eventually realized he was being played and left Karma and the strip club behind. But what goes around comes around! The next morning, there she was, ahead of him in line for coffee. And they actually kind of had a date. Even though I wasn’t sold on the storyline, I did like the moment where Quinn told Barney she didn’t believe any of what he’d told her about himself (it was all true), thus revealing that she’d actually been listening.

I still don’t know if the stripper is the one for Barney, or just something (someone?) for his character to do while the pieces are put in place for a happy ending with Robin. But at least this time the writers have avoided The Zoey Problem – Quinn is actually likable. I won’t mind seeing her interact with the gang more, the way Kevin did.

I hope these changes will create some momentum for HIMYM and breathe new life into the series before the season finale. This show is still good, but I think most fans will agree that it’s not as good as it once was. I used to really look forward to watching it, and now it’s just another half hour block on my TV schedule. The idea that characters’ lives are about to change drastically – Ted moving, Lily and Marshall having a baby, Barney dating a stripper, Robin…well, we don’t know, but my money’s on career advancement – creates a sense of excitement that I haven’t had in a while about this show. I just hope they follow through.

What did you guys think of the show? Are you excited about these new developments or are you bummed Ted won’t be living above MacLaren’s Pub anymore?