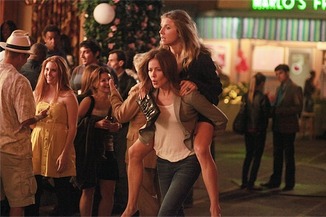 There was a lot to love about last night’s episode of Cougar Town. Will my typical Five Favorite Things be enough? We’ll see.

1. “A One Story Town” was funny, but also really warm. The episode saw Jules go to great lengths to try and make sure Bobby impressed his date, Travis’s photography teacher Angie. Bobby had sort of become the saddest character on the show (well, not counting the kid in the helmet) and I liked seeing all his friends rally for his sake, because they know what’s really great about him.
2. But who cares about warm? It was hilarious. Bobby eating the bread bowl and spilling soup all over his date, even though Jules warned him not to, was one of the funniest things ever. And the many hilarious ways Bobby and Angie’s date was a disaster just made those final moments all the better. Especially Ellie giving Angie a piggyback ride.
3. Tom Cruise karate running! “It feels faster! Let’s take a curve!”
4. The Quebec heavy Crab Festival. Random, wacky, hilarious.
5. Laurie rubbing buffalo wing sauce in her eyes, like a champ.

Bonus: I didn’t watch Scrubs, but if you did then this was a great episode for you.