It really isn’t Dick Grayson’s day. I mean, last month he found out that he was supposed to be a Talon before Bruce adopted him. Also, Bruce punched one of his teeth out. Not a good day.

So this issue he takes the call from Alfred and runs to try and save the Mayor from a Talon, and it’s one hell of a brawl that sees Nightwing all but kill this zombie of a man. Saves the Mayors life and everything…before he’s attacked again. 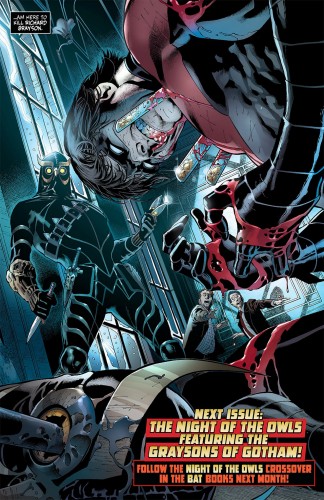 The Talon that fought Batman was William Cobb, Dick’s ancestor. He’s going to put Dick to the test…next issue.