Also, following that Top 5 (which becomes a Top 15 is read with my NYCC coverage), is the latest Cartoon Network / DC Nation postponement news covering Young Justice Invasion and more.

5. A Beginning And An End for Bionic Woman (Dynamite)

Well, the good news that I reported from NYCC 2012 was that we’d be getting a Bionic Man vs. Bionic Woman mini-series starting in January. The bad news? Well, the Bionic Woman solicitation shows that she will no longer have her own series after January 2013. Fear not, the Bionic Man series continues and we don’t what will be the pay-off from the mini-series. So, January is one step backwards and one step forward for Dynamite’s bionic franchise. 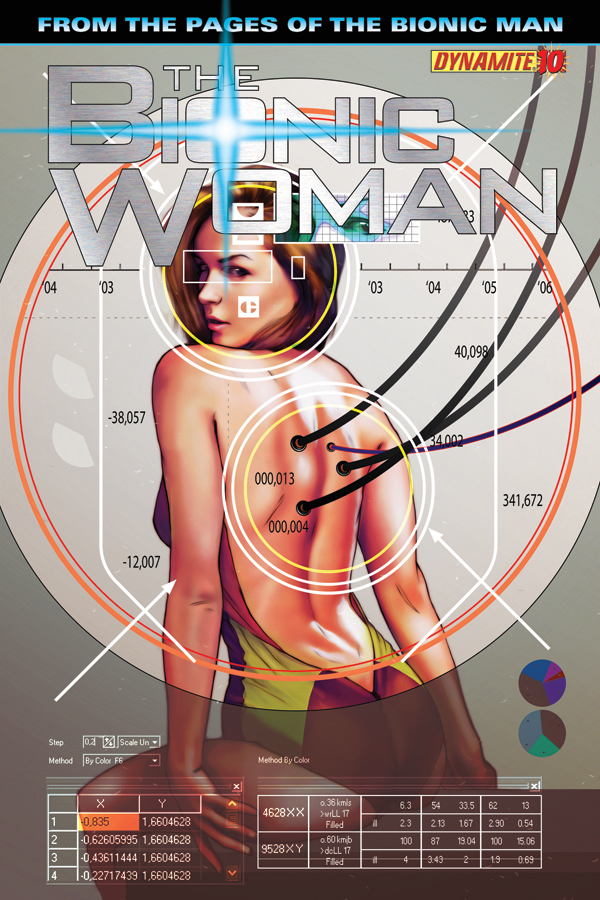 The conclusion of the Fembot War in Russia, with the Bionic Woman caught in the middle! And when all hell is breaking loose in Mother Russia, will Jaime be forced to be Mother Fembot? It’s the hardest decision of Jaime’s life when her mind is the key to fembot salvation, but her finger is on the trigger of fembot annihilation!

After causing havok for the Teen Titans, Superboy, the Legion Lost and the Ravages during the teen-teams cross-over “The Culling”, N.O.W.H.E.R.E. resurfaces to tangle another teen hero: Firestorm! I think the character fits better with the teen side of the DC Comics than the Justice League, so hopefully this is a shift in that direction. So, let’s start the “Have Firestorm join the Teen Titans” movement / petition now! :) In Dan Jurgens I trust. 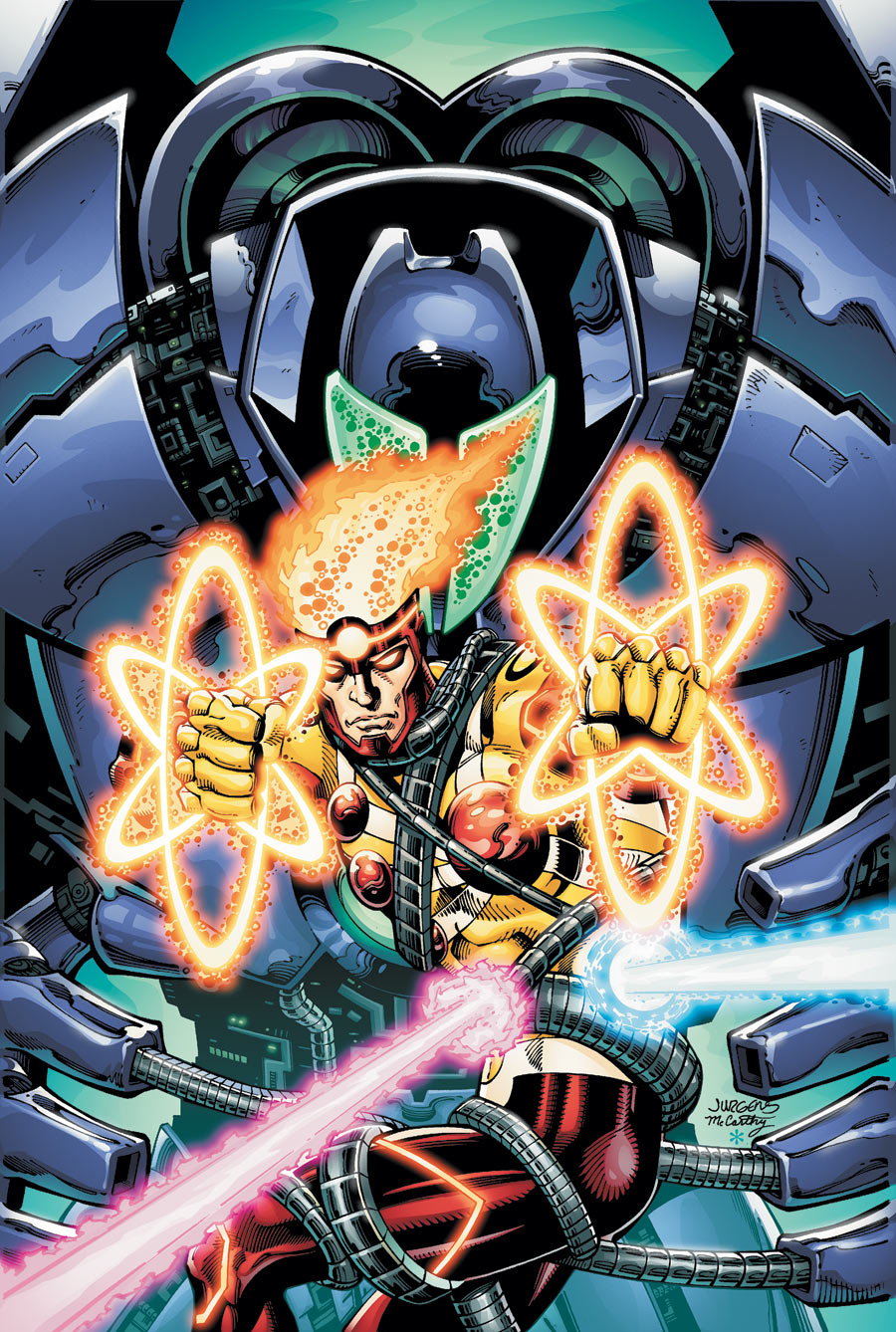 • Ronnie and Jason weren’t exactly getting along before their super-powered alias became a fugitive, so this won’t help matters at all!

• And to make things much worse, Firestorm has been targeted by N.O.W.H.E.R.E.!

3. Another Court of Owls’ Talon Gets A Series (DC Comics)

Certainly, the Talon ongoing series that was part of DC Comics New’s Third Wave, written by Scott Snyder and James Tynion IV with Guillem March on art, has gotten most of the buzz, but Birds of Prey welcomes their own Talon in January. Strix, last seen tangling with Batgirl in that series penned by Gail Simone, leaps to BOP. I’m curious how that happens and how she becomes a team player. Should be fun. 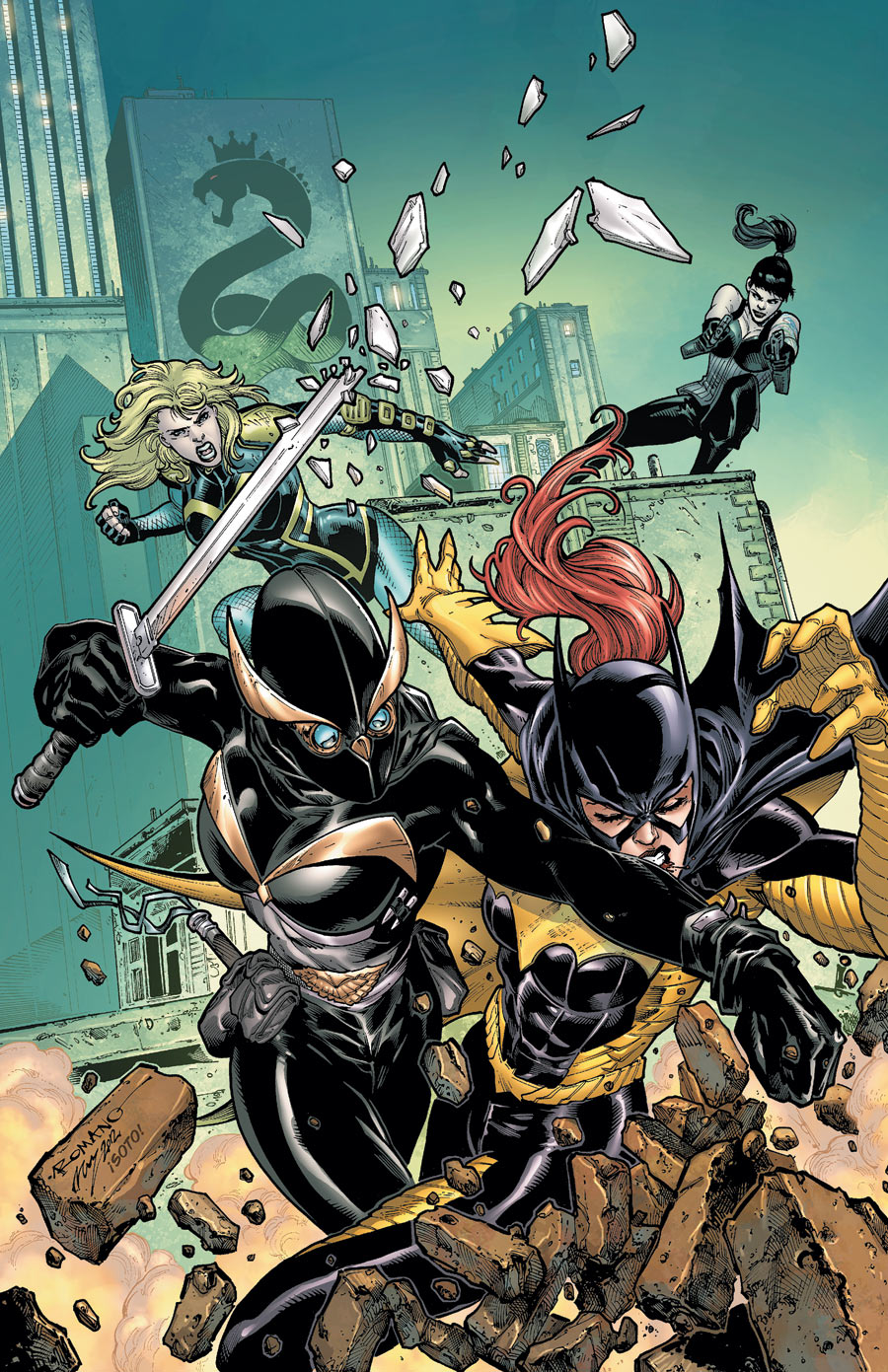 • The team gets a deadly new member in the form of Strix, a former Talon from the Court of Owls!

• Who is she and what does her appearance mean for the rest of the Birds?

• Plus: Something goes terribly wrong for Black Canary…

2. Bloodshot’s Secret Origin Revealed… Or is it? (Valiant)

In my NYCC coverage, I indicated I was excited for Archer and Armstrong #6 because it would include the Eternal Warrior and a new Geomancer. I heard about Bloodshot “Harbinger Hunter”, and I wasn’t sure what it was or whether I’d like it. Even in the old says Harbinger was not one my fave properties, but when I read the solicit my fears were alayed as Blooshot #7 will seemingly focus on Bloodshot’s origins hunting Harbingers. I doesn’t appeat that it will be a forced cross-over and that pleases me. :) 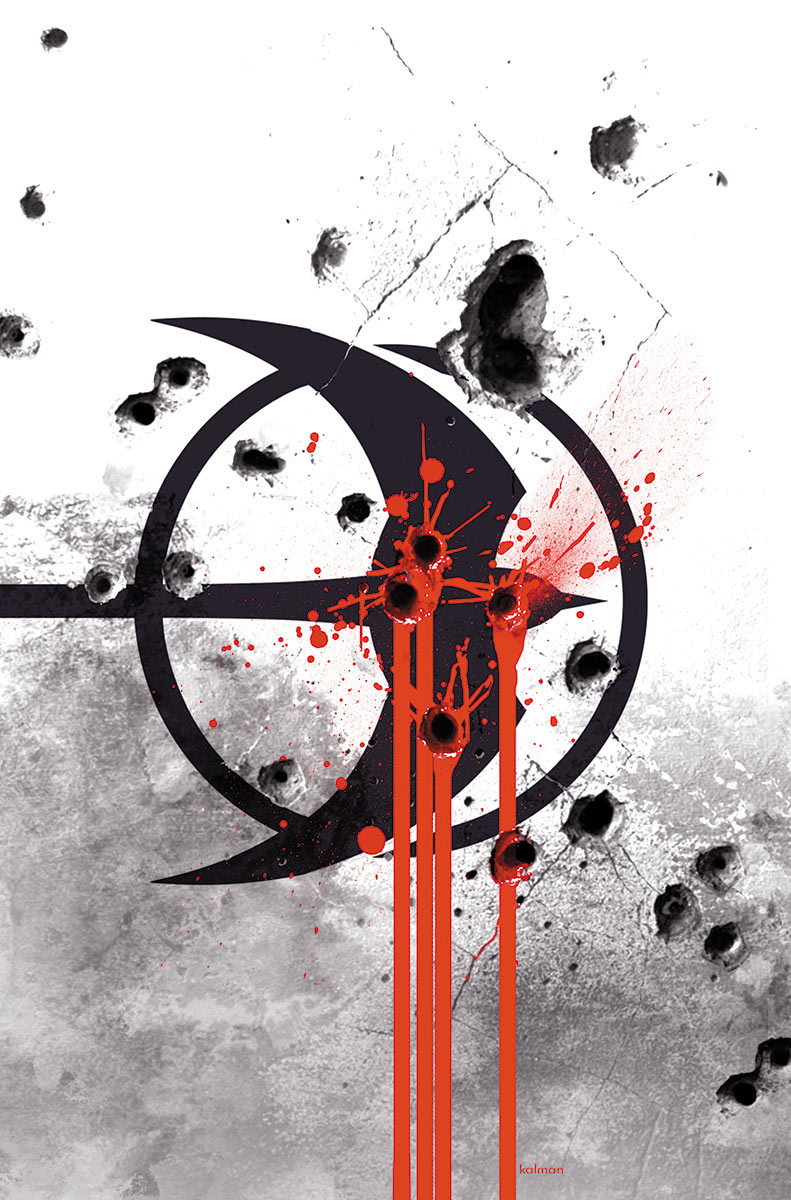 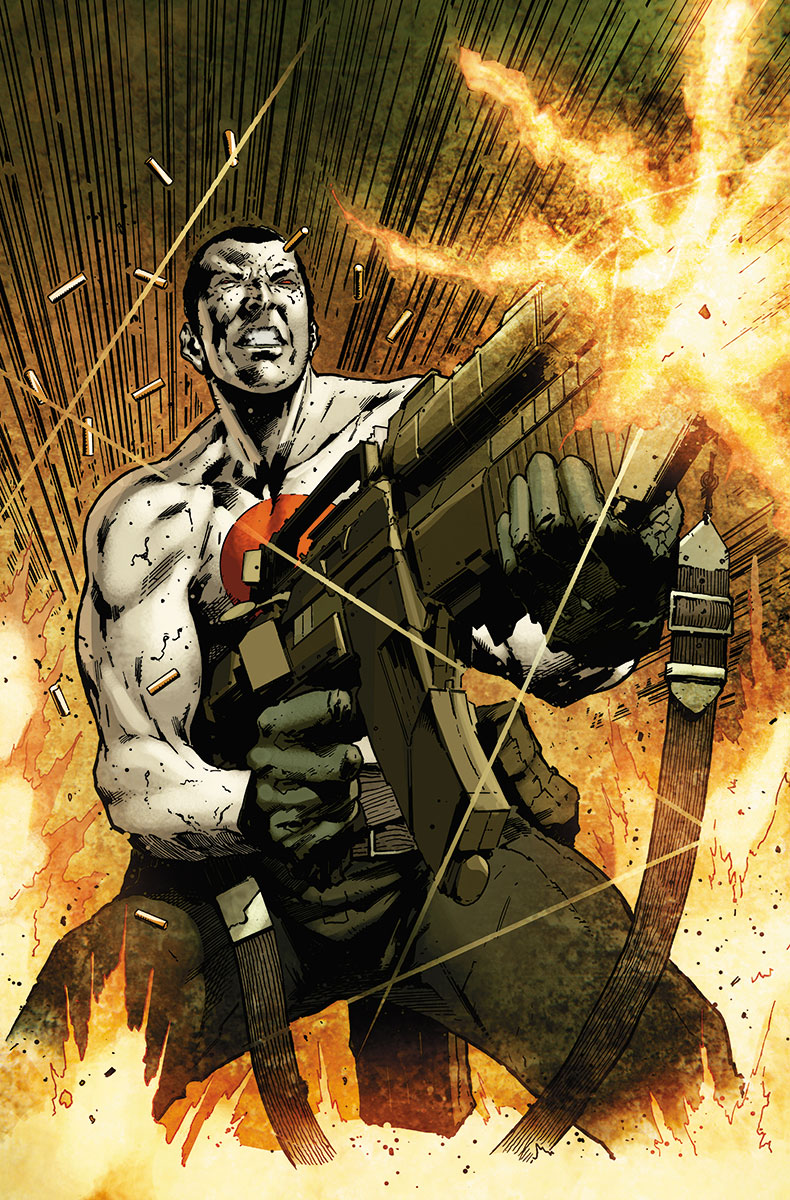 In the beginning… Bloodshot: Harbinger Hunter!

At last – a special origin issue revealing Bloodshot’s hidden history in the Valiant Universe! Recently, the unstoppable, nanite-infused weapon known as Bloodshot was set free by the mysterious Dr. Kureitch, who implied that the two of them shared a past…and many, many secrets. Now, we will finally see how far back their twisted, symbiotic relationship goes. Bloodshot and Dr. K used to be extremely skilled at tracking and slaughtering [REDACTED], and the results of one botched mission in particular now threatens to rock the Valiant Universe to its core…

Questions will be answered. Alliances will be betrayed. And body counts will tallied.
It’s the moment you’ve been waiting for – and it’s one that will leave you reeling.

1. Star Trek 2 Movie Into Darkness Gets a Prequel (IDW)

If you haven’t checked it out yet, Star Trek: Countdown was a great prequel to the first Star Trek movie in the reboot led by J.J. Abrams. It is available in trade paperback form at finer book stores and comic shoppes. I highly recommend it.

Carrying on that tradition, IDW brings us a new mini-series starting in January 2013. It leads into the Star Trek 2 movie, titled Star Trek Into Darkness, and is set to hit the silver screen in May 2013. I imagine the mini-series will reveal what role BBC Sherlock’s Benedict Cumberbatch will play in the movie. 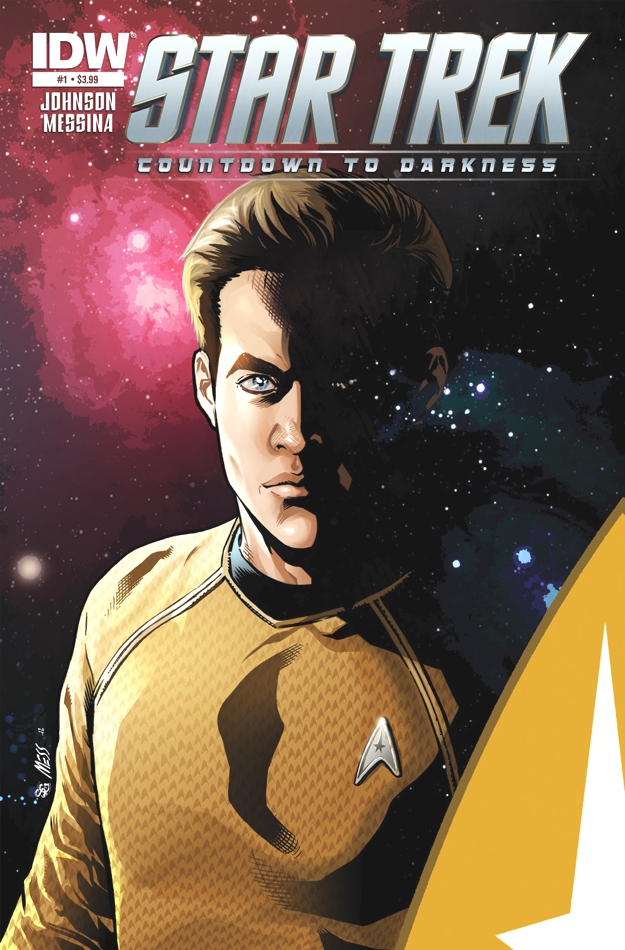 The countdown to the motion picture event of 2013 begins here, in this blockbuster 4-issue prequel mini-series that sets the stage for the upcoming STAR TREK film! Like the best-selling STAR TREK: COUNTDOWN in 2009, this all-new series leads directly into the next movie, with a story by STAR TREK writer/producer Roberto Orci and Mike Johnson (STAR TREK ongoing series), and drawn by the original STAR TREK: COUNTDOWN artist, David Messina! STAR TREK: COUNTDOWN TO DARKNESS is the can’t-miss lead-in to the new adventures of the Enterprise crew!

*Variant cover: Unique variant cover, graded by the CGC! Ask your retailer about the totally unique CGC-Graded variant cover! Limited to 100 copies only, each issue of the prequel will have one! The only copies of this unique variant will be graded!

Any thoughts on the Benedict Cumberbatch role in Star Trek Into Darkness?

With all that, what books are you looking forward to in January 2013?

As has been the case for the last few weeks, we still have not heard back from Cartoon Network or DC Entertainment regarding their reasons for the postponement of new episodes of the DC Nation block to 2013. To get caught up on all the developments on this story, including its impact on Young Justice Invasion, Green Lantern The Animated Series, and more, please check out our e-library here. 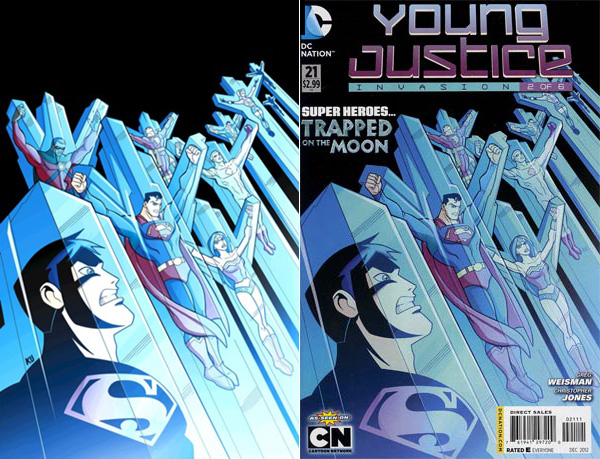 However, our friends at the Superman Homepage have indicated that the postponent may have a lot to do with some kind of breakdown with Milestone Media who DC Entertainment licenses properties like Rocket, Static and Icon from for their comics, TV, etc. They compare two comic book covers for the Young Justice Invasion tie-in comic book to make their point: the previous solicited version with Icon on it on the left and the one that hits stands without him on the right. In Young Justice Invasion continuity, Icon is a member of the Justice League. That would impact the whole DC Nation block since Young Justice Invasion accounts for around half of the programming along with Green Lantern The Animated Series plus the DC Nation shorts peppered in the cracks. An interesting theory.

In other news, the DC Nation Hiatus petition has surpassed 15,000 in only 2 weeks! You can still sign it here. In addition, the Facebook group that started to push for the return of the DC Nation earlier than 2013 has gotten close to 1,200 members in that same two weeks . To join you can visit here.

Lastly, if you’re interested to see what’s coming during the rest of Season 2, check out the Young Justice Season 2 teaser reel and our breakdown of its Top 3 reveals.

Till next week, thanks for reading. As always, all feedback welcome.