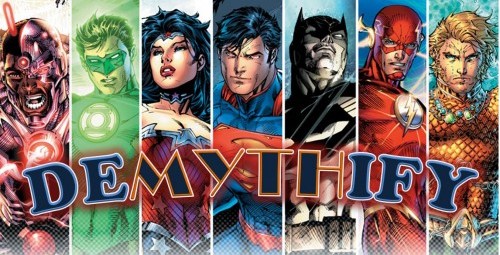 Before I get into this week’s column, I wanted to share information with you that an industry great suffered a stroke over the holidays. 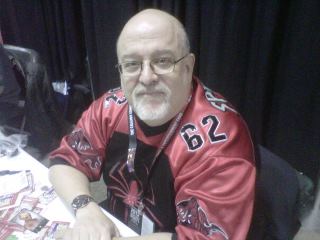 Award winning, fan favorite novelist and comic book scribe Peter David is recovering from a stroke. Peter is currently writing Marvel Comics’ X-Factor, has worked on Incredible Hulk, as well as for DC Comics on books like Young Justice, Aquaman and Supergirl, and creator-owned work like Fallen Angel. He is also prolific in the novel sphere writing sci-fi and fantasy such as Star Trek, movie adaptations and several other projects. Enhancing his resume is also his work for TV including Young Justice on Cartoon Network. My thoughts and prayers go out to Peter and his family during his recovery.

UPDATE: Kathleen, Peter’s wife, provides an update on his situation here. Wishing a new year of improving health for Peter and strength for his family.

Ok. Onto this week’s column.

With DC Comics wrapping up its first full calendar year of the New 52 today on December 31, 2012, I think it is instructive to look back at some of the more macro discussions that folks are having with regards to this new universe. 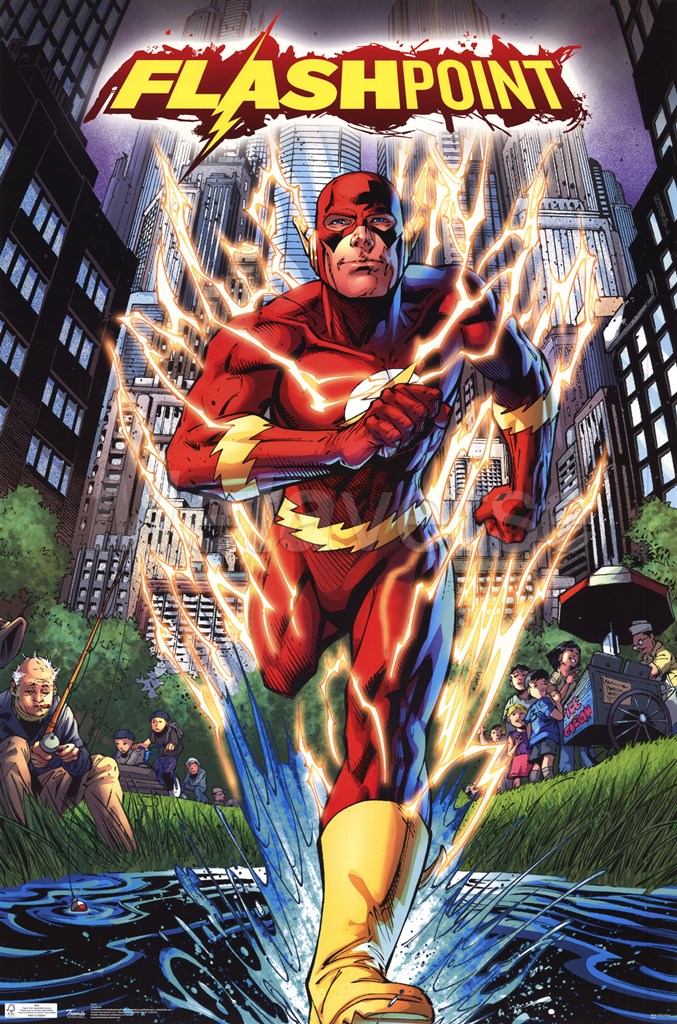 Prior to DC’s Flashpoint mini-series that enabled the creation of the New 52 universe, the two top tier successful franchises that the company had were the Batman and Green Lantern family titles. Beyond those, other DC properties had mixed success. Some even had critical acclaim, but not substantive fan dollar support. Others were duds. Others still were decent, but not providing any “buzz”.

All that changed when the DC Comics New 52 launched in September 2011. I won’t go through each title and regale you with their respective strengths and weaknesses, nor will I evaluate each subsequent wave of new books that replaced cancelled titles.

What I will do is discuss the dreaded “continuity” word and how DC editorial and the executive brass did more harm than good in trying to defend the need for the New 52 and putting a bubble around the Batman and Green Lantern family books so as not to alienate their existing fan dollars.

Prior to the New 52 I was a HUGE fan of continuity. I liked that DC built on previous stories or grabbed a strand from one old school arc and took it further. 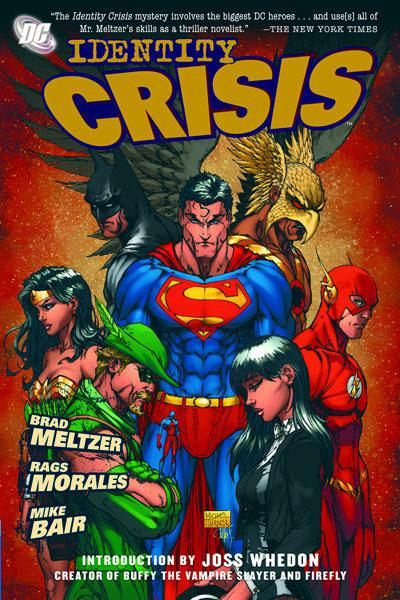 That is what writer Geoff Johns does with everything he writes for DC Comics. That is also what writer Brad Meltzer did when we wrote the controversial Identity Crisis mini-series in 2004 based on events that happened in 1979’s Justice League of America #168. Those are but two examples.

That said, between say 1979 and 2011 we had several events that changed DC’s continuity so that perhaps previous stories didn’t happen exactly as intended. In the mid-1985 we had the Crisis of Infinite Earths that collapsed DC’s then innumerable multiverse into one universe. We then had 1994’s Zero Hour that intended to clean-up the time-line of this new singular universe. Following that we have 2005’s Infinite Crisis that saw the creation of a multiverse and the contraction of it into a new singular Earth. Then the maxi-series called 52 culminated with the reemergence of yet another new multiverse at its end in 2007. Lastly, 2011’s Flashpoint mini-series saw the melding of DC Comics’ main super-hero line with its WildStorm and Vertigo publishing lines – into an Amalgam ;) of sorts – and at its end spat out a brand new Earth and presumably a brand new multiverse. 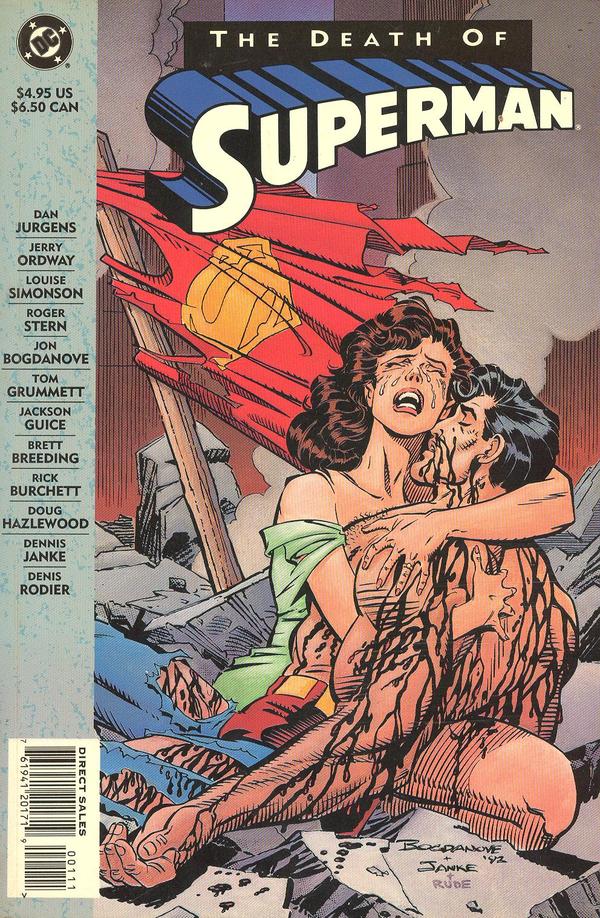 That is where we stand today: in a brand spanking new multiverse and on the main super-hero Earth – or Prime Earth as DC Co-publisher Dan DiDio coined it – where we are only 5 to 6 years into meta-human history from the first public emergence of super-heroes starting with Superman. With that, I think it’s fair to say that there is not nor should not be a lot of continuity to even be getting tied in knots about.

However, DC did tie itself into knots at the beginning. DC Comics editorial went to great lengths to tell Batman and Green Lantern fans in particular that all the “key stories”, particularly over the last 15 to 20 years when decompressed storytelling became all the rage, still happened. DC executive Eddie Berganza even boasted that he had a 5-year timeline that he created plotting out what still happened between Superman’s emergence and “now”, the launch of the New 52 #1’s in September 2011; granted there were books that were set in the past of the New 52 even from the get-go, the first arc of Justice League, Action Comics, All-Star Western and Demon Knights come to mind let alone the Legion of Super-Heroes taking place in the future of the New 52.

Berganza and even DiDio at comic cons listed out key storylines that still “happened” in the New 52: A Death In The Family, The Killing Joke, Blackest Night, Brightest Day, The Death of Superman, Identity Crisis, all the other “Crisis” events and a few others. 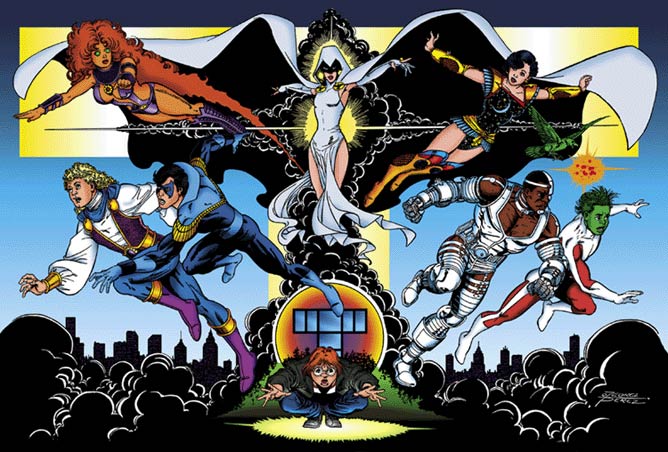 At that time, it was also noted by writer Geoff Johns that even though Cyborg was a founding member of the Justice League from the get-go in the New 52, he would sometime in the New 52’s first 5 years also become a founding member of the beloved Marv Wolfman penned and George Perez penciled New Teen Titans. Since the first arc of Justice League was set early in the New 52’s past and its second arc was set in modern day, this would allow Cyborg to return to the modern day Justice League after his Titans stint. Well, we later learned that couldn’t have happened because there was no incarnation of the Titans beyond the current Young Justice version.

There are other continuity gaffes that are less on-camera or on-panel scenes, but more word-balloon issues typically revolving around the Teen Titans and its members like Red Robin. All that said, those word balloon issues were fixed in the collected editions of the opening arcs of the DC Comics New 52. 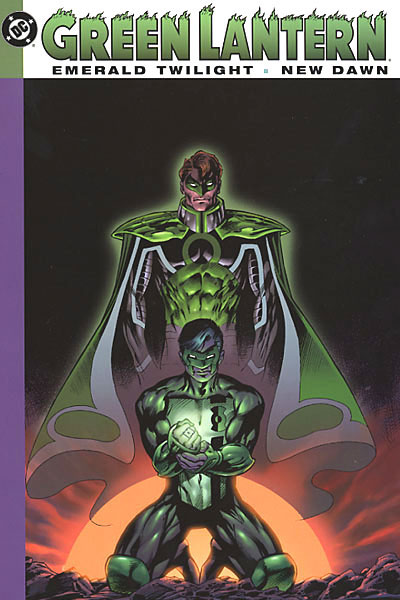 We still have a blips where the New 52 is directly contradicting itself on-panel as it were and not just in throw-away word balloons. Recently, Kyle Rayner’s origin was retconned from taking on the Green Lantern mantle after Hal Jordan went mad as Parallax to something that implies in its presentation that Emerald Twilight and naturally then Green Lantern Rebirth didn’t happen. It was an unnecessary retcon from earlier on-panel New 52 art, but I get that things can change. I am curious about why this new retcon was needed and how it plays into a future arc or whether it was just interesting “filler” for the issue.

DC has enough editorial issues keeping track of what actually happened on-panel in the New 52 to worry about what pre-Flashpoint “key stories” happened.

What I would say to readers despite what we may still hear from DC Comics editorial and the executive brass, assume NONE of the pre-Flashpoint stuff happened until you see it on-panel in a New 52 comic book. You can still enjoy your old comics and collected editions, but take the New 52 content at face value to determine what old chestnuts are in-continuity. That said even if an olde event happened, it couldn’t have happened in the exactly the same way. I think DC may be referring to the those old event outcomes or key story beats as having happened, e.g. Superman died, but not with all the “how’s” we remember, e.g. his “wife” Lois Lane cradling him as she does on that iconic cover; newsflash Superman is unmarried in the DC New 52.

While I think DC creators and editors had their hearts in the right place when giving us their off-panel assurances about all the “important” stories still happening, it’s becoming quite clear as we enter the second full year of the New 52 that it is impossible that some of the stories they said happened still did. 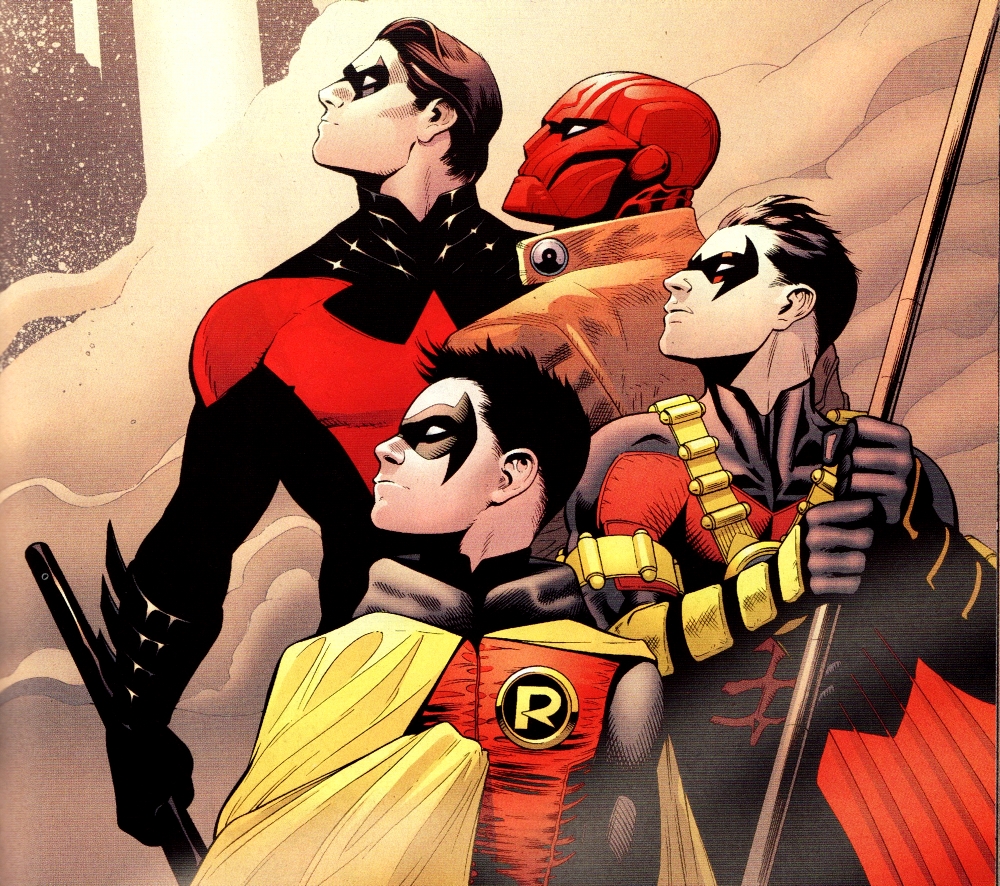 That means that Batman and Green Lantern fans are in the same boat as every other fan of DC Comics properties: your heroes and family of characters changed dramatically too!

The biggest continuity headache in the New 52 remains all of Batman’s Robins having existed in a short 5 year time period leading up to Damian Wayne having the mantle now. So that means Dick Grayson and Jason Todd were Batman’s Robins while Tim Drake was Batman’s Red Robin all in actually 3 to 4 years when you consider Batman’s Year One was as a solo hero and that Damian can be assumed to have been Robin for at least a year. If that is the only on-panel significant continuity quirk, I can live with that since DC Comics’ strongest portrayals IMHO have been with anything Robins-related, confusing timeline notwithstanding.

My message to DC brass is let the panels in the comics speak for you. Have us “wait and see” if the Death of Superman happened or not. Don’t feel the need to please all fans. I can tell, and you know this, you won’t. Put out quality books that stick to your on-panel New 52 continuity and we’ll all be good.

My message to readers is now that we are entering the second full year of the DC Comics New 52, this where DC needs to shine. Clearly the first full year had bumps of many kinds, which could have been expected, as well as some great successes.

Lastly, since at the end of one year and the beginning of another one tends to reflect, below is a look back at DC Comics’ Holiday Specials of olde as well as the comic logos of DC Comics and Marvel Comics Group through the ages. Enjoy the trip down memory lane! 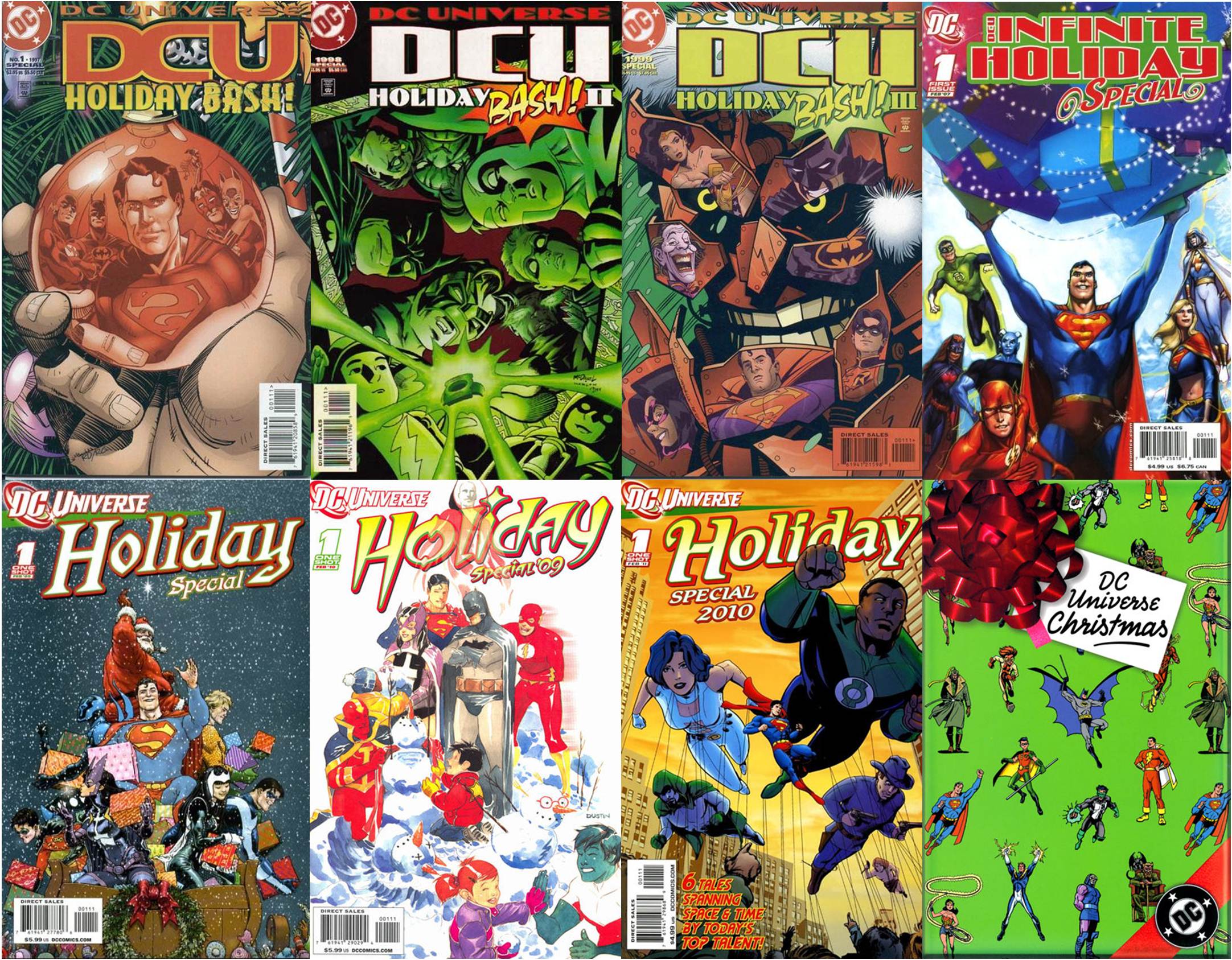 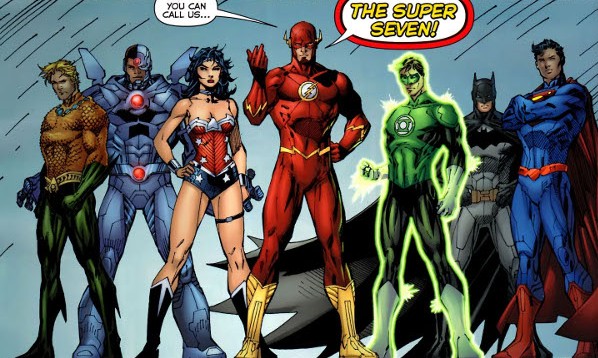