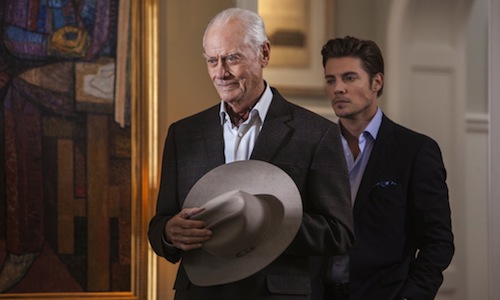 The problem with mid-season shows is having to wait for them, but in the case of Bravo’s Dallas, the wait is finally over and I couldn’t be more excited.

Premiering tonight, the two-hour second season premiere drops us back into Southfork without missing a beat and immediately takes viewers back to the trials and tribulations that we learned to love so much last season when TNT announced that it was doing a remake of the classic 70’s drama. One of 2012’s biggest television surprises, Dallas picks up right where it lives off, offering delicious drama, sinful sexcapades and just the right amount of campy cheesiness that leaves us only wanting more.

The opening scene shows our favorite badboy, John Ross Ewing, taking advantage of an innocent bride-to-be on the night of her bachelorette party. The fact that this is not just motivated by Ewing’s libido shouldn’t come as a surprise to fans of the series, as it’s actually another part of yet another hair-brained scheme, blueprinted by his father, JR. While almost all of John Ross’ plans are fuelled by his intense jealousy of his cousin Christopher, the concept never gets old and remains my favorite television dynamic to watch. The reason why I am confident that Dallas won’t falter in its sophomore season is because it makes no apologies for what it is and for its creative voice. Unlike Revenge and Once Upon A Time who chose to unnecessarily flip the script and change elements that were already working in their second seasons, Dallas appears to be resolute in its determination to keep things going in the same direction. Recognizing that its audience likes seeing Larry Hagman deliver biting one-liner after one-liner, John Ross try to outsmart Christopher, only to fail at every turn and unnecessary scenes with Jordana Brewster in a barely-there bikini, the writers only give us more in the new season. The original Dallas worked because it’s embraced its over-the-top ridiculous nature and this series does the same.

Other highlights from the first two episodes of the season?

– An amazing appearance from a Who’s The Boss alum who appears to be joining the series in a recurring role. I won’t tell you who it is to keep some of the suspense for tonight’s episode, but I will tell you that it thankfully isn’t Tony Danza.

– The emergence of a new secret daughter (you knew doing this kind of storyline was only a matter of time).

If I am being honest, however, while the premiere left me more than satisfied, it still almost felt like this season is simply a countdown to the inevitable departure of the character that practically made the series. With Larry Hagman’s passing in November, JR unfortunately will finally be written out of the series in its March 11 episode. Just as he was the star of the show when it first aired from 1978 to 1991, he is still the heart and soul of Dallas and it will be fascinating to see if the show will suffer without him. While we may now know “who shot J.R.” that doesn’t mean he won’t be missed.

The season premiere ofDallas airs tonight on Bravo with back-to-back episodes at 9 p.m.