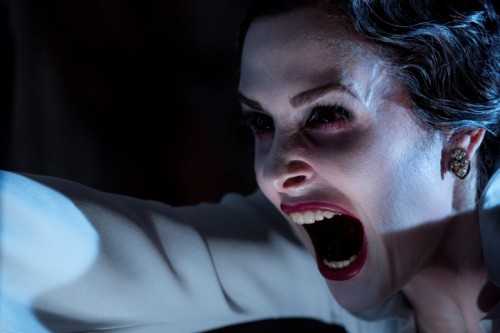 Needs a breath mint in the worst kind of way.

Is there any director with greater momentum than James Wan right now? Close to a decade ago he would direct a film (Saw) that consequently ushered in a new type of horror known as “torture porn.” He would follow that with a few films that would fizzle more than they would catch afire. But then he directed Insidious which grossed $13.2 million its opening weekend on its way to earn $54 million domestic. This summer, his The Conjuring not only became a surprise hit, it is one of the few horror movies of recent memory to carry critical acclaim. Horror movies are generally spurned by critics, so to see a consensus of approval of a horror genre release, well, you tend to notice those things.

With Insidious: Chapter 2, the applause from critics may have waned, but the audience was definitely still game to be scared. Budgeted at $5 million, the film would shatter some records with a $41 million opening. Those records include being the biggest opening weekend for a horror film n the month of September, and it has the second largest Sept. opening for any film ever. For those wondering, #1 for September all-time is Adam Sandler’s Hotel Transylvania – it made $42.5 million the last weekend of Sept. 2012.

It will be interesting to see if James Wan can achieve a feat that was accomplished by Robert Zemeckis when he had a pair of $100+ million earners (Cast Away, What Lies Beneath) in the 2000 calendar year. Clearly, Insidious: Chapter 2 will surpass the success of Insidious, but will it have the legs to make it to nine-digit territory? I’d say it has a good two, maybe three weeks to make it happen before it leaves the top 10 entirely. Nonetheless, you can bet Universal is looking at James Wan’s success with much interest since he will be the one taking the reins from Justin Lin when it comes to the seventh installment in the ultra-successful (at least the last few installments) Fast & Furious franchise. It arrives in theaters July 11, 2014.

Coming in a distant second is Luc Besson’s The Family, which looked to combine Analyze This – without all the psychobabble – with the type of action that typifies most Besson-related productions these days. It also got negative reviews, but did well with older audiences wanting to see a film featuring Robert De Niro and Tommy Lee Jones. With a $14.5 million opening, expect this one to drop considerably this upcoming weekend and be gone from the top 10 by its third weekend.

While James Wan’s horizons are bright with F&F, Vin Diesel’s Riddick isn’t looking so hot. Dropping 63.2% in it second weekend, losing its #1 seeding to finish third, it added $7 million to bring its total to $31.3 million.

Oscar hopeful, Lee Daniels’ The Butler, finally made it to $100 million, while We’re the Millers continues to be relevant to not just top 10 talk, but the top 5. Six weekends into its run it hasn’t dropped below fifth place. It’s never finished #1 but that hasn’t prevented it from racking up profits to the tune of $131.6 million domestic.

The rest of the top 10 consists of surprise Spanish-language comedy hit, Instructions Not Included ($26.5 million since opening), quite a few summer holdovers – Disney’s Planes is getting the benefit of being one of the few family-friendly films in cinemas at the moment – and (shudders) One Direction: This Is Us.

This weekend we have Prisoners (I’ve read good things) and Battle of the Year 3D (LOST‘s Sawyer in the Hoosiers of dance movies – WTF?) as the major wide releases along with Ron Howard’s Rush in limited release before expanding the following week. My thoughts is that Prisoners can clear $25 million at least while Battle of the Year will make around $18 million. See how my predictions fare next week.