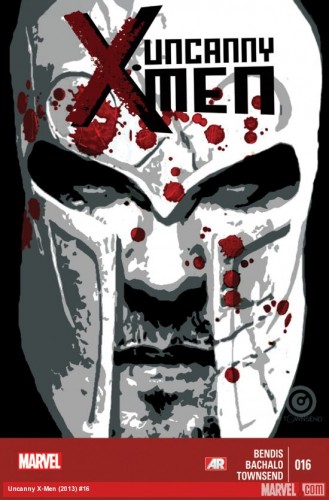 Several issues ago there was a protest gone wrong at a college and the Uncanny X-Men were in the middle of it. Now, what I’m assuming is weeks later, there’s another protest and this time the anti-mutant people are there as well. Also there? Magneto. Magneto who is slowly growing furious at these humans speaking in favor of mutants calling them their brothers and sisters. He day dreams what he would have done before the Phoenix, massacring the lot of them with his powers  and literally salivating at the idea of it. That’s when Agent Dazzler shows up, he called her for information, and she doesn’t have it. He mentions that he isn’t sure what her agenda is these days, and she turns it back on him. That no one knows his goals and people think his powers are screwed up, and that it could very well be in his head. She points him to Madripoor, apparently it’s turned into a mutant haven.

This leads Magnus to see what she’s talking about, since he is the uncrowned King of the Mutants, and what he finds is…well, it’s Madripoor with mutants. Kinda like 70’s New York or Vegas if you’re not familiar with Claremont’s favorite little evil island from the 80’s. He sees crime, gangs, drugs, and finally is assaulted by some local idiots in a bar. They think he’s there undercover, and they’re just going to kill him, don’t even want information. They put a bag on his head but it doesn’t stop him from bringing them all down with just little bits of metal. That’s when the idiots realize who the old man they tried to rough up is, and they tell him whatever he wants to know…and he still maims them. They were distributing MGH, and he has a no tolerance policy for that. He heads to Hydra Tower, or whatever it is called now, and is greeted by The Blob. He isn’t alone, either, Sabretooth and Silver Samurai are there too.

That’s when Dazzler shows up, and Magneto is pissed to find out she’s in charge….and then she turns into Mystique. She details her plans to Magnus, and explains why they need him there. She thinks he’s going to be pleased, but instead he sees her island as an abomination before both his and Xavier’s dreams. He expresses his rage, and Mystique decides to start talking smack on Cyclops, so he makes Samurai stab her. He whips out a handful of bullets and tears everyone down, takes their copter, and then crashes the building.

At the Xavier School, Cyclops hasn’t heard from Magneto, and he’s never been gone this long before. Where is he going to go?

Doesn’t Marvel usually stick a .1 on the back of books that they’re using as backdoor pilots to other series? Not that I’m complaining, but this was an issue of Uncanny X-Men the way Amazing Spider-Man #654.1 was an issue of Spider-Man. Yes, I did just google to get the issue number, and if you do the same, this reference will make much more sense.

Flash Thompson as Venom. There, now don’t say I never did anything for you.

The downside to having Bendis write the backdoor pilot is that he’s not writing the Magneto series, so it’s very likely to have a very different tone. Actually, come to think of it, I have no idea what his book is going to be about.

When did Blob get his powers back? Last time I saw him he was clearly not powered and not fat. Neither of those describes him now.

Are the All-New X-Men going to be held back to brief cameos in this book?

So, here’s a big “Really?” for Marvel. Madripoor in the X-books is owned by Mystique and it’s replacing Genosha and Utopia and Asteroid M as “Place for mutants to go”. In Avengers World, however, it’s being run by Gorgon and being lifted out of the sea on the head of a dragon. I see tons of people ragging on DC for stuff that doesn’t make sense, but I’ve seen nobody talk about this. How the hell does this work? Do the different offices at Marvel even try to talk? I mean, the Avengers books completely ignore the X-books while using them constantly, and it just isn’t working.

Magneto went full First Class for a bit in this issue. I like it.