Hello and welcome to My Pinterest Is Piledrivers.  I am James A. Sawyer and @todaysjimsawyer, and I will continue to futilely promote my Twitter til the day I die.  Or stop writing columns.  Whichever comes first.  Oh, and fundraiser still here.

So this is interesting.  I started this article on the 20th of January.  It is now the 28th of February.  A lot of big, big things have happened since then.  Punk.  Bryan.  Batista.  It’s going to make some of my suggestions seem petty and quaint, but nonetheless I’ll begin the article as written.  Also, since my wremix remix got a whopping zero comments last week I’ll post my wishlist with a few indie DVDs for those who like belated birthdays.

I want to see some non-PG Dean Ambrose, otherwise known as Jon Moxley.

Give Alberto Del Rio something substantial to do.

When Alberto Del Rio first came into the WWE, I thought “I have no idea who this is, but he can wrestle.”

To me, Del Rio is unique in that he can scratch a lot of itches in the classic wrestler template.  He’s a mixture of the Latin Lover, Evil Foreign Heel, Asshole Rich Guy, and Arrogant “Royalty.”  You can play up any one of these traits depending on what you need.  His facial expressions, especially the best one-arched eyebrow since The Rock, are always on point.  His ringwork is amazing, and is easily some of the best in the WWE right now, which is actually saying something.

Man that was bad-ass.

“But Sawyer,” you might say, “Del Rio’s already a Royal Rumble winner, MITB winner, and two-time WWE champion and two-time World champion!”  Yeah, I know.  But his Royal Rumble victory led to an opening match job against Edge.  And his world title runs were all fairly short-lived affairs.  In my opinion, this guy needs a major program around him.  Not just “let’s put him in feuds with Mysterio and Sin Cara, ’cause… you know, Hispanic” or “let’s give him a belt for a PPV” but an actual storyarc wherein he’s a major player.  Have him replace Orton as the new corporate chosen one.  Have him win a world title and go on to well-fought matches against Bryan, Ziggler, and Punk (if he comes back).  Have him be the one to retire Christian.  Just something, because this guy is way too good to be an afterthought… or an appetizer for Batista.  As we’ve now seen since my writing of this, Del Rio is a good deal more popular than Batista.  There’s also a rumor he might be on his way out, presumably retiring.  Please don’t go, Del Rio.  Look, I even wrote a song about it.

That’s right, I was born when Reagan was president.

Okay, let me say this.  The way that CM Punk was misused and the WWE almost missed out on the metric ton of money and press he got them, the way that Daniel Bryan was almost forgotten about until finally, more than two years after he exploded finally getting recognition, this is the position Cesaro is in today.  How the ‘E cannot see the potential of a freakishly strong guy who speaks five languages and looks like Jason Statham’s younger brother is beyond me.  “Well what about his mic work?”

Look at that, that’s all improv.  He’s interacting with those random citizens he met while on tour there.  What he’s saying is genuinely funny, not just funny for a wrestler.  Telling the kid that when he grows up to be an architect he should replace every building?  Saying they had to sculpt a statue by the river so it would look somewhat populated?  That’s good.

They easily could’ve built the US title into a real title and had Cesaro rebrand it into a new European championship and hold onto it forever until some All-American face came along to dethrone him and reclaim it. 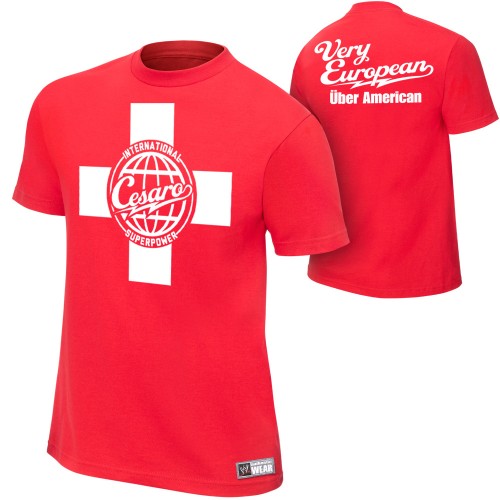 He even already has a cool shirt.

Since I wrote this, he’s beaten Orton clean and come close to having beaten Cena clean and was in the Elimination Chamber.  He’s getting more and more crowd support and there’s rumblings of turning him face, and I can only hope those are true and 2014 is a breakout solo year for the guy.

This guy is the next “Rowdy” Roddy Piper.  The next Jake “The Snake” Roberts.  He’s early, psycho-heel “Stone Cold” Steve Austin before he became the catchphrase shouting man of the people.  Ambrose may be the best actor in the WWE.  He makes you believe that everything he’s doing is real, and that he means everything that he says.  Honestly I could see him doing legitimate acting work as a bad guy or henchman in those new WWE movies with actual stars in them.  Or in a romantic comedy with Drew Barrymore, where he’s competing for a girl with Adam Sandler, and he just gets fed up and tosses Sandler into a wood chipper.  That’d be pretty sweet.

I know Roman Reigns has the size, and also a lot of comments on YouTube videos from lovestruck women, and Seth Rollins has the flashy moves, but Ambrose is ten pounds of charisma in a five pound bag.  He’s the rare heel that can lose but not lose face as he’s just so damn good at what he does.  This guy should be in main event feuds by the end of this year.

Please don’t use Hogan to squash your talent.  Or at all.

As of this writing, it’s being reported that Hogan has a verbal agreement to work with the WWE.  Because of course he does.  Look, I’m sure Hogan has convinced you that the fans would really love to see him leg drop Cesaro at Wrestlemania and a man in the prime of his life selling the simplest possible move by a guy old enough to be his dad would be good for business.  It wouldn’t.  If you must, have him host a show on the WWE Network about the 1980s and tell him not to bury everyone that’s not Hulk Hogan too much.

And since this writing it’s reported he’s hosting Wrestlemania.  Great.  Of course.  Getting an A-list actor in one of the most popular franchises in the world was just a trailer for getting the star of “Thunder in Paradise.”  How would Hogan work as a host anyway?  “Hey brother, didja like that last match?  Well here’s another one!”

Here’s one for the live audience…

Step your game up.

This will be an interesting one to see as when this is published, RAW will be in Chicago, the very vocal hometown of one CM Punk.  I’ve been kinda surprised at the lack of hijacking, at least in regards to him.  And I was quite disappointed in the crapping of a fine match between Roman Reigns and Bray Wyatt just because it was a slower-style match.  However, points to the Del Rio support and the adoption of “Boo-tista.”

The WWE is in a very weird place right now.  The Network is very exciting, Cesaro and The Shield are involved in prominent spots and there’s some amazing talent in NXT right now like Sami Zayn and Adrian Neville.  But… a lot of the booking seems to be operated out of spite, or in contempt of the audience.  Simple booing won’t work, as that might just let them pretend that was the plan the whole time.  What might work?  Silence.  Simple golden silence.  If Wrestlemania XXX does feature Batista vs Orton?  Sit on your hands.  Don’t cheer, don’t boo, get refreshments, leave to beat the traffic.  Nothing sends a message like wrestling in what sounds to be an empty arena.

Six weeks ago this might’ve been the end of my column, but luckily for me the WWE has been making more mistakes than a Monopoly player on meth, so I get to stretch this column out to two parts.  I could use the extra space anyway until I start getting indy access and I can finally wean off the McMahon teat.  Ugh.  On that image I’ll leave you.