Usually, the merging of tribes makes for a lively episode of Survivor. Not this week. In my book, that’s two duds in a row – I hope this season of Survivor picks up soon! I see players with the potential to be good strategists, but so little has happened so far. 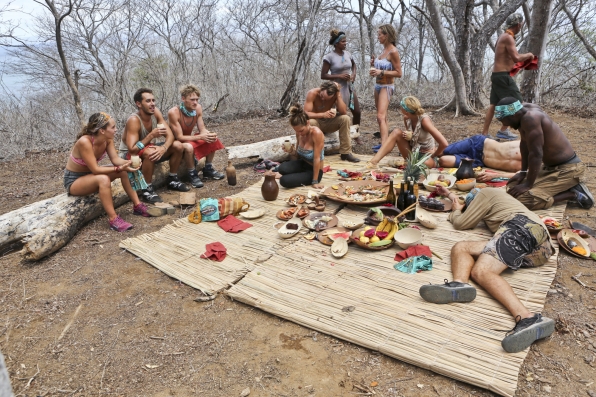 If you’ve seen the most recent episode, click on through..

Julie quitting really put a damper on this episode. Things were really heating up post-merge, and I was excited to see where the Jeremy-Josh power struggle would land. Julie’s reasons for quitting were pretty weak – the elements have not been that harsh this season, and she wasn’t truly on the verge of getting voted out. She just felt hungry and ganged up on. But frankly, the real reason she quit is because she never wanted to be there in the first place. I read online that Rocker was recruited for this season, and had never seen an episode of Survivor before he came on the show. I doubt Julie was some kind of super-fan. So, Survivor producers, this is your just desserts. Players who didn’t apply for the show just don’t have the same drive as ones who’ve been dying for their shot at the game.

What did you guys think of trail-mix-gate, anyway? I mean, I don’t really know how much trail mix Julie took, but I was kind of on her side. It seems like these players really suck at food rationing, so I get the temptation to squirrel some away. I also couldn’t help but notice that it only seemed to be the tribe hotheads who seemed very upset – Baylor, Missy, Jon and Alec.

The episode began with four singles and four couples, which made for some very interesting dynamics. Once again, Jon and Jaclyn ended up in the middle and I wasn’t sure who they were going to go with.

Personally, I find Missy to be rather untrustworthy and Baylor is kind of a wildcard. I wouldn’t want to work with them. However, Josh and Reed are clear threats. I like them and want to watch them play, but if I were in the game I would be trying to break them up.

Next week will be interesting, since Julie was one of Jeremy’s votes. The previews could be hugely over-blowing this disagreement between Jon and Jaclyn, but I’m very intrigued by it. The women are saying they find the men on the tribe chauvinistic, and it looks like Alec is being particularly pointed out. That’s very interesting, considering earlier this year I wrote about how I thought Alec and Drew both displayed some troubling attitudes towards women.