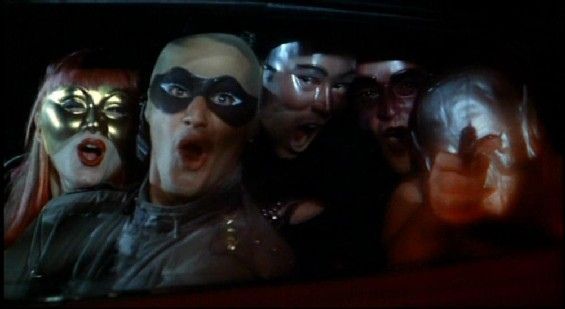 As a member of the Class of 1984, there was excitement when Class of 1984 arrived at the movie theaters in 1982. It was a movie that was supposed to be about us. Although the film really wasn’t a faux-documentary. This was about a school that had gone completely out of control. My high school was run by nuns who refused to let chaos rule. Sadly the administration of Abraham Lincoln High can’t control their student body. But maybe one plucky new teacher with music in his heart and dreamy eyes will restore order. He at least has a chance to protect Michael J. Fox from the bad kids. The Class of 1984 remains at top exploitation school thriller after three decades.

Andrew Norris (Perry King) arrives at his new school ready to change young lives. The historic building however is a shell of its former glory. Turns out the kids aren’t ready for learning. School is merely a great excuse to get out of the house and indulge in drugs, carnality and just bad things. Veteran teacher Terry Corrigan (Planet of the Apes‘ Roddy McDowall) has no illusion that he’s changing young lives. He’s just there to survive until his pension kicks in. He believers in the 4th “R”s of education: revolver. What does he have to fear? The school security runs metal detectors at the entrances. But that doesn’t stop the wrong kids from bring bad things onto the campus. The worst of all the kids is Peter Stegman (The White Shadow‘s Timothy Van Patten). He’s got a mean crew that dominates all the rackets in the school. They control the drugs, protection and prostitution angles. Plus they are a mean looking punk crew. What sets Stegman apart from the normal hoodlums is that he’s not a misunderstood troubled teen. He’s an honor student who has embraced nihilism.

Norris thinks he can touch these kids lives. In a normally Hollywood film about kids who need that special teacher, he might have had a chance converting Stegman. But this isn’t some Disney tale of hope for the next generation in education. This is pure a exploitation thrill ride. The big question is Norris going to survive the students. This isn’t about graduating that hopeless case and getting him into Harvard. Thankfully this horrific high school encounter is what makes the film click all these years later. Tim Van Patten shed his goofy white guy persona that worked on The Master series. He’s positively menacing in his punk rock look. Likewise Perry King seems like he was supposed to be the lead in The Dead Poet’s Society. So honest and sincere as he enters the educational inferno. Instead he’s merely hoping he doesn’t get murdered by his students. While Michael J. Fox doesn’t have a major part, it’s easy to imagine that this role informed his conservative high schooler on Family Ties.

The Class of 1984 predicts the nightmare to come in inner-city public education. Even schools in the suburbs have metal detectors and dedicated police officers. The film is a bit of a warning that nobody seemed to take seriously. “We are the future! And Nothing can stop us,” is the films slogan that sums up what really happened.

Audio Commentary allows director Mark Lester to explain so much about the film..

The Girls Next Door (116:17) speaks with Lisa Langlois and Erin Noble.

Blood and Blackboards (35:35) gives tales from the dangerous high school.

History Repeats Itself (21:00) gets Lester with composer Lalo Schifrin to speak of the music.

Do What You Love (46:55) lets Perry King explore his career.

Trailer and TV Spots (3:20) reminds us that this isn’t a dreamy education tale.

Still Gallery (4:42) takes us behind the scenes.

Class of 1984 is a perfect evil education film. This isn’t the usual juvenile delinquent flick that gets ruined with a redemption in the final reel.