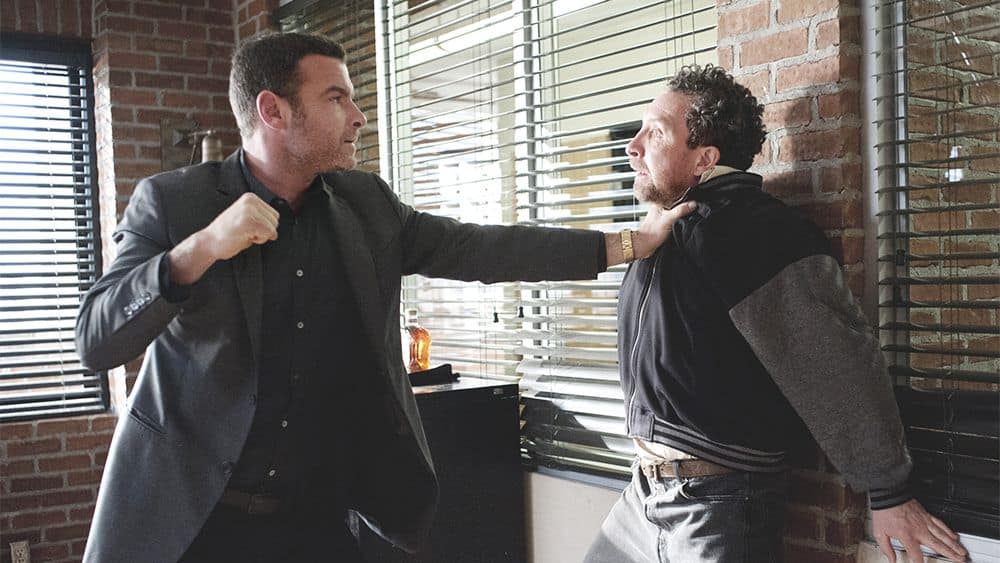 After reviewing Season One of Ray Donovan, I wasn’t exactly sure which way the story would go with this series. Some shows will leave you on edge, chomping at the bit for more, but Ray Donovan wrapped things up fairly nicely the first time out – and that wasn’t a bad thing. The character of Ray Donovan (played by Live Schreiber) is just such a bad ass that even though there was no real cliffhanger, one couldn’t help but want more. The main question was whether or not the show’s sophomore season would build off the success of season one, or if it would fall flat like far too many shows do these days the second time out.

Luckily, season two kicks things into gear early and never takes its foot off the gas. In fact, it’s a much more intense, engrossing season than the first, which is always a great sign. The show picks up not long after season one ended. Ray is getting his life back together after finally getting his father Mickey (Jon Voight) out of his life for good – or so he thought. It doesn’t take long for the fallout of the climax of season one to come back and bite the Donovan family in the form of the FBI, namely the head of the L.A. division of the FBI, Ed Cochran (Hank Azaria).

Cochran wants Mickey back in L.A. and he wants Ray to be the one to bring him in. Now that’s just a sprinkling of how complicated things get this season, and really it’s just how Mickey gets back into Ray’s life, as he’s quite happy to be drinking himself into oblivion down in Mexico. This season also sees a stronger story for Ray’s wife Abby (Paula Malcomson) and his daughter, Bridget (Kerris Dorsey.) Abby continues to struggle with getting close to Ray, and a rift begins early on in the season that causes Abby to begin seriously considering life without the man she’s been with almost all her life.

Meanwhile, Bridget continues to grow into a young woman, and just like her father, she doesn’t really like to obey the rules. That leads to the return of Marvin Gaye Washington (Octavius J. Johnson), the young rapper/singer who stole Bridget’s heart in season one, only to eventually be banished by Ray for being overly aggressive with her during an intimate moment.

One of the best things about Ray Donovan as a show is how it balances so many angles incredibly well throughout the course of the 12 episode seasons. There’s so much going on this time out that it’s just amazing to watch it all come together – especially when it’s Ray using his problem solving skills to get things back on track. There really aren’t any weak storylines to be found, as each really help expose more about the characters involved in them over simply being there just to get said character some screen time.

I haven’t even mentioned Ray’s brothers Bunchy (Dash Mihok) and Terry (Eddie Marsan), who each have their own small, yet important arcs. Nor have I mentioned welcome newcomer Wendell Pierce, who plays Ronald Keith. I won’t say who he is or what he does, but I will say he gets plenty of screen time alongside Mickey, and their chemistry is great. Basically everyone from season one returns in a meaningful way that helps push all the characters forward story wise, while always keeping Ray front and center as the show’s core focus.

Schreiber Is superb once again, and proves that he’ll likely be a mainstay in the Best Dramatic Actor category for a while to come. He’s always been underrated in my eyes, and it’s really great to finally see him get a role that he can really run with. Not only that, but he directed one of the best episodes of the season (Episode 7, “Walk This Way,”) which just blew me away from a storytelling standpoint. Let’s just say that when I saw his name appear as director when the screen faded to black, I already began anticipating his next episode behind the camera (which will hopefully happen in season three!)

Ray Donovan is just such a great show in a time when a lot of other great shows are coming to an end. Whether or not it can keep up this momentum into the next season remains to be seen; however, with how well things were woven together this season, it’s hard to see them dropping the ball any time soon. If you haven’t jumped on the Ray Donovan train yet, do yourself a favour and go pick up season one and two at your earliest convenience, as season three begins in July and you won’t want to miss it!

The show looks and sounds fantastic on Blu-ray, as you really can’t beat HD TV these days. With how well the cinematography and sound structure is done, each episode feels more like a short film in its quality.

On the extras front, things are a little bare once again. There are some audio commentaries to be found on select episodes by Schreiber, Voight and Pooch Hall. I mean, if you’re going to have episode commentaries, Schreiber and Voight are two guys you definitely want to hear from; however, it’d be nice to get some more on-set and/or behind-the-scenes extras as well.

As a whole, Ray Donovan Season Two hits the ground running and never lets up. It’s intense, funny, surprising and suspenseful, all while keeping things on a mostly realistic playing field for all the characters involved. The Donovan’s feel like real people that find themselves in often extraordinary circumstances, and in the end, that makes for great TV. Don’t miss it!