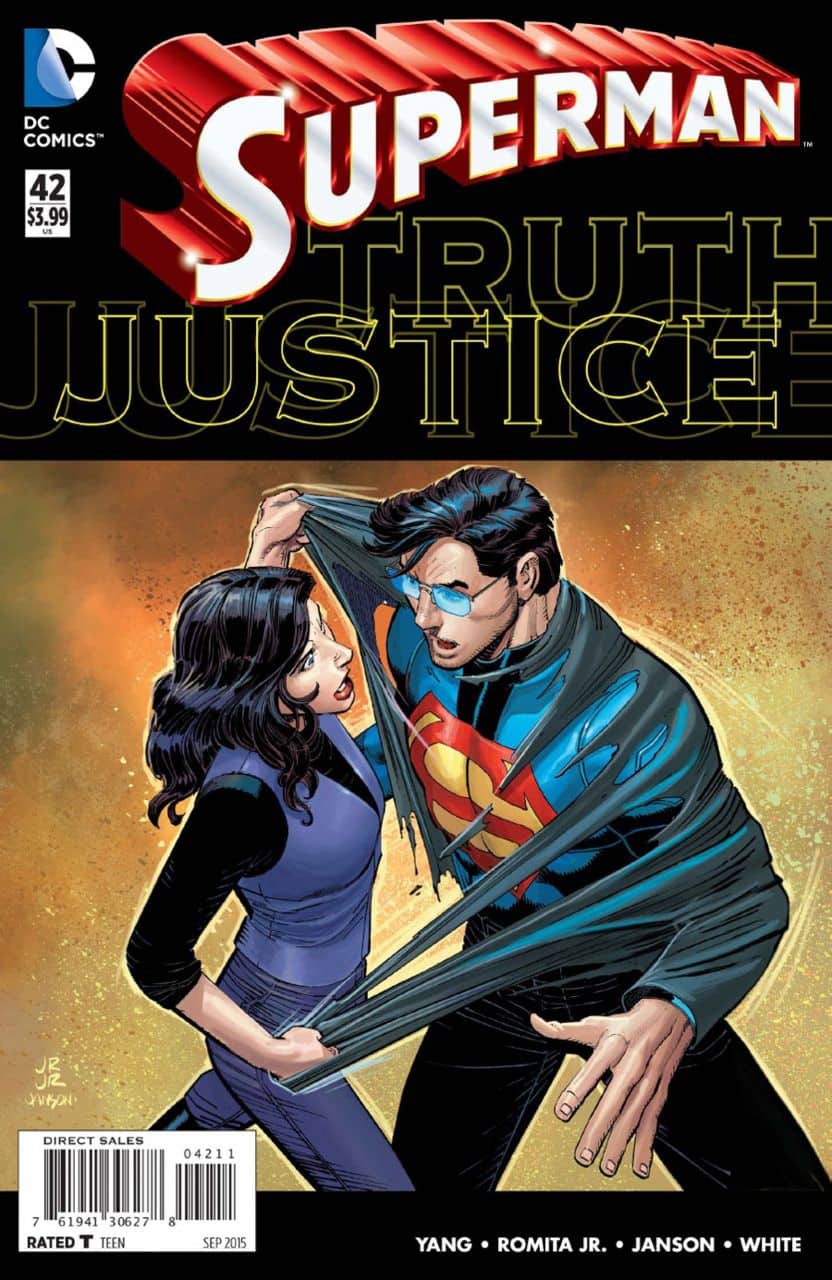 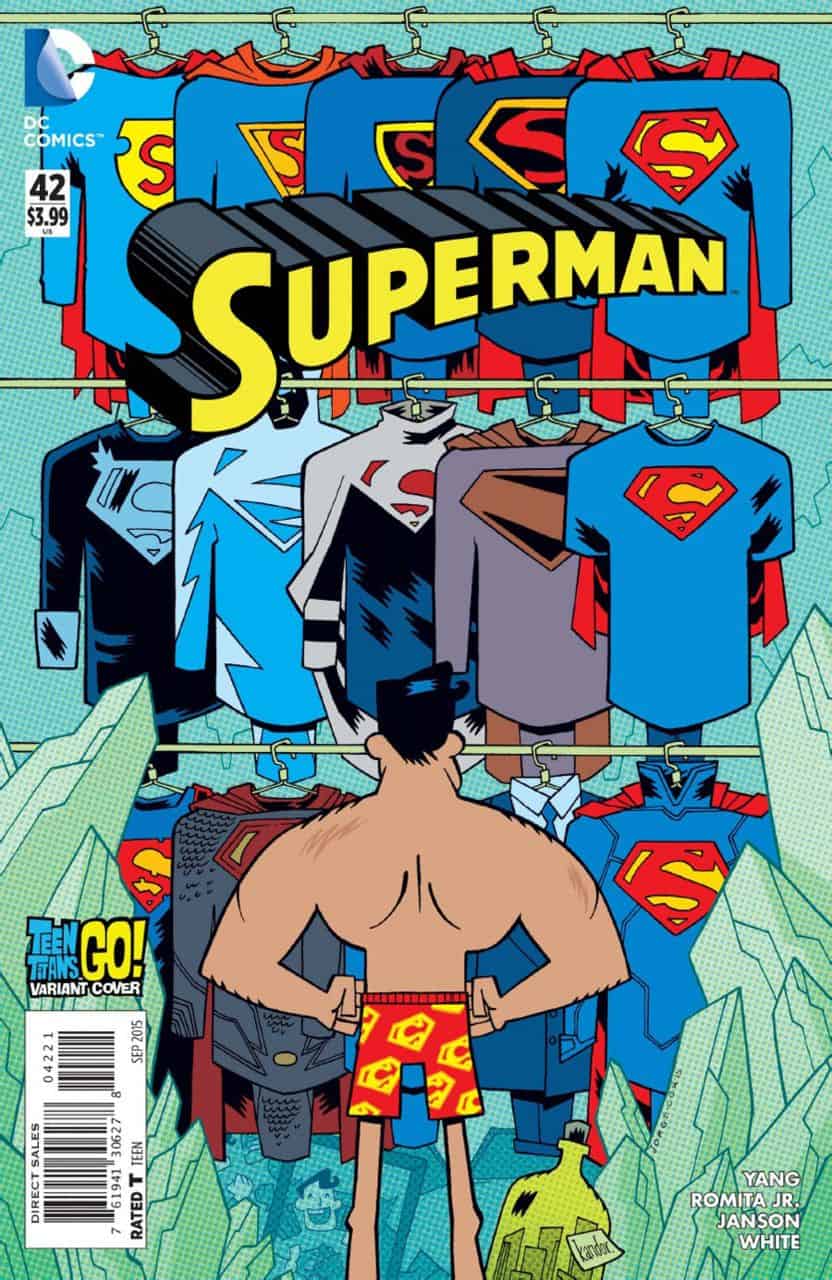 Picking up immediately after last issue, the foursome are alone to catch their breaths and gather their thoughts. Clark has healed once more and brushes off the severity of his condition to a concerned Jimmy. Condesa gets right to the nitty-gritty: a subversive organization known as HORDR (no caps? – Hordr?) is behind recent developments. Information is the most valuable currency and that’s exactly what funds this hush-hush group. Absolutely no one is safe from their prying eyes. She especially emphasizes this to Clark as he adjusts his glasses. She mentions her (previous) employment with the Big H.

Hi-tech ninjas come out of nowhere, just because. Clark springs into action. Condesa is in awe. She informs the trio that they are corpses that were made into solid shadows. Clark confirms this since he doesn’t detect any heartbeats nor pulses within them. Clark’s shirt is slashed in some convenient places. Lois, determined and driven, apologizes to Clark for his supposed cowardice and substantiates her hunch – the mild-mannered reporter is the Man of Steel!! It’s not enough that he has the Kryptonian armour underneath, he has to remove the specs to hit it home.

[Comment: this all happens within the first five pages!! There’s no better way to get straight to the point!!]

The destination isn’t always the most interesting part. There is fallout and follow-up. To say that Lois is incredulous and outraged are gross understatements. She is typically human in her reactions. That’s the irony of life – we all strive to be extraordinary while those who are want to be plain and average. Condesa no longer needs to be carry the ruse. The truth is out there, in more ways than one!! The leader of this Anonymous-like enclave goes by the username Hordr_Root. She can grant them access to their secret campus (that should be a giveaway) but entry requires tech savvy.

Clark has just the candidate. The quartet make a detour to Gotham City where Hiro Okamura combines his magic with Condesa’s. He does soft, she does hard. *snort* Couldn’t help myself there ;-) Condesa produces a mask that acts as a much cooler lanyard. He can easily replicate three more but won’t know how to program them. That’s Condesa’s department. Clark will use his heat vision to shape them. Sparks begin to form between Jimmy and Condesa. The intrepid photog is astounded by Condesa’s programming skills. She throws back a politically-charged rhetorical question. This def catches the cub reporter off guard. She also half-heartedly flirts with them. Lois asks point blank Condesa’s role in all this. She was recruited right out of college. She found it appealing to stick it to the fat cats but things went dark real quickly. Hiro returns with the copies. The young lady compliments him on his expediency. He refers to himself as the Toymaster to which Clark ridicules him for the moniker. Condesa speaks code (literally) to the mask and activates it. She beams at her own super-power set. So many of them are in hiding!! Hiro has found his life mate ;-)

A specific bus stop is the access point for the trip to parts unknown. All the passengers as well as the driver are disguised. The bus rides off the beaten path and flies into the Cloud (uh, I mean clouds!) Lois catches herself holding Clark’s hand. He expresses his gratitude for having her as a true-blue friend. She doesn’t reciprocate those feelings. They reach the terminus. It’s Silicon Valley in the heavens, Google campus in the air. Jimmy profits from a caramel latte. Condesa tells him to enjoy the perk while it lasts. The feel good vibe is illusory. All the underlings have been blackmailed into the organization. Discretion is their main motivator. The P.A. turns on. Time for pep rally. I feel like I’m in school. The sunshiny flowery parlay is replaced with an announcement that intruders are on site. The Daily Planet staff are easily spotted. Condesa has pulled a Houdini.

Clark grabs his buds and flies off. Lois definitely did not enjoy flying Air Clark. X-Ray vision can’t spot the feisty female but Clark breaks into a surveillance room that has monitors tuned into scenes from his super-heroic life. They are not stellar moments. Every single piece of info on the entire planet’s populace is stored in that hub. The faceless leader brags about the potency in the storage. It is out of world. He isn’t exaggerating! Clark realizes that this is his covert correspondent. The outing just enlarged with him addressing Mr. Kent specifically as Superman. Lois sees Condesa hanging her head in shame. Even that spitfire is at his mercy. Superman just aced the test with flying colours. Nothing is more appropriate than having the Man of Tomorrow at the helm of futuristic development. This is no formal request nor empowering option.

The S comes through the clothes and Big Blue has at it with the security forces. Superman wants the duo to split and take all the subordinates. Jimmy surmises that Clark is going to unleash the solar flare. Lois asks for clarification but is aware of the awesome power. Jimmy spots Condesa. She pulls some Judo moves on him. She expresses relief at his well-being but he is doubtful. He sarcastically gives her a colorful nickname [natch!] She can redeem herself and wash away her guilt by helping. Lois smacks Root upside the head with a massive lead pipe! The mask reveals a young male. She isn’t quaking from his threats. He is just a hologram(?). He pixelates into nothingness.

Jimmy has taken over the P.A. He orders everyone to evacuate. Some of the lackeys are skeptical but when one realizes that the system has been backed by an average Joe, they oblige. Supes goes supernova [see what I did there?] The place is almost completely reduced to smithereens when a solid silver figure touches him on the shoulder. Superman has been shut down. Jimmy and Lois haul Clark on to the bus. Condesa is at the wheel. Lois has a major change of heart. The little caption stating that “BETRAYAL!” is coming next issue sure has my hair on end!!

Little L: Condesa throws in a dig against Lex Luthor, Superman’s ultimate nemesis. His conglomerate has nothing on Hordr!

Colour your world: Condesa has blue hair. She jokingly chastises Jimmy on her brown-ness. She calls Jimmy red. Jimmy retorts by calling her blue.

We can squeeze you in: Blink and you’ll miss the one screen spotlighting a scene from ACTION COMICS {2nd Series} #2 by Rags Morales.

We are treated to an extra two pages this month!! Thank you, Mr. Yang! The plot moved at super-speed. There were new questions formed as answered were brought forth. There are major hints that Hordr is not of this Earth. How can a majorly powered individual fight an abstract concept?!? Information can take on concrete form but just like ideologies, one cannot eliminate it. Sir Francis Bacon knew the score five centuries prior. Mr. Yang has intensified the zeitgeist. We are all held hostage to a varying degree in this Digital Age. Social media alone allows for necessary connections to gain employment, to promote one’s product, and to communicate with distant family and friends. Texting is greatly convenient especially as to not disturb others when an idea needs to be shared or discussed. Paper still exists but the virtual hard drive is a more viable storage space. It’s obvious that Clark will come out on top but like pure energy, the threat will be transferred instead of inexistent. Mr. Yang, you have come up with the unbeatable foe for the Last Son of Krypton. As you pointed out, he has to be Tomorrow, not Steel.

Mr. Yang has created a likeable character in Condesa. She has a touch of Latina to her with the “idiotas” slur when referring to the elite. She is a walking mosaic! Hiro may be smitten with her but I predict that she and Jimmy have initiated a beautiful friendship J I demand to know her secret!! Is she an extraterrestrial?? Her essence flowed from her corporeal form to the mask and the bus when she spoke binary. Hey. That can be her new codename!! Don’t sue, Marvel ;-P Lois is the fiercest most independent woman on the planet. She is tougher than nails but she has a huge heart. She is able to separate her feelings from her profession for the most part. Her concern for Clark is genuine. We all become miffed with our friends over trivial matters but when push comes to shove, we are there to support them.

The dialogue is a bit cheesy but Mr. Yang wants to show us Condesa’s youthful spirit. Thankfully, she hasn’t been corrupted nor gone past the point of no return. Anyone with half a brain can spot the alternate spelling for Hordr and Root.

John Romita, Jr. puts the focus on Lois. We all know his established status can create splash pages with the rest (and best) of them but the facial expressions are what carry the story. Lois doesn’t budge until the very end. She lets down her defenses in the hopes that a being as powerful as Clark will pull through. Jimmy literally is Superman’s pal and Clark’s best friend. His ebullience doesn’t undermine his protective instincts nor his fight mode. The masks are a twisted take on the wink emoticon/emoji.

Klaus Johnson keeps Mr. Romita’s pencils tight. The solid lines remain constant around the cast and supporting characters. The pixilation must have been painstaking!!

Dean White cuts loose with the solar flare. Duh! It’s pure delight to see that this newest ability hasn’t been extinguished yet. Aside from that, he exquisitely brings out the blue behind Clark’s fake glasses. The skin tone highlights Clark’s vulnerability after he’s been sapped of his strength.

Rob Leigh intensifies the sound effects. The narrative boxes are distinct. Thankfully, there’s only a handful of them. The “Betrayal” caption seems more ominous than usual.

I jumped on to the Superman bandwagon precisely one year ago with Geoff Johns’ sophomore issue. In fact, it was my very first review for this site >_< I lucked out in that Mr. Johns’ favorited my tweet. John Romita, Jr. has been committed to this book for the past twelve months. He showed his writing chops two months ago. I have come to appreciate his art. Thus, it is for ‘selfish’ reasons that I choose to examine this issue. This isn’t about ego elevation. It’s about embracing a character that has stood the test of time and is back on my fanboy’s radar.