DC Comics is planning to have a HUGE April 2017 with the Superman Reborn Aftermath fallout across several Superman Family books, which includes the Legion of the Super-Heroes, Super Sons and subtle Watchmen teasing.

Alongside that are more overt Watchmen teasing in the 4-part Batman and The Flash cross-over.

Plus there’s the surprise debut of a classic Team Titans character in Nightwing #19.

However, that’s not all. Excluding these two series of books, as they have been sucking much of the comic book fandom oxygen over the weekend and rightly so, below are the remaining Top 10 DC Comics Rebirth and/or DC Comics April 2017 Solicitations. 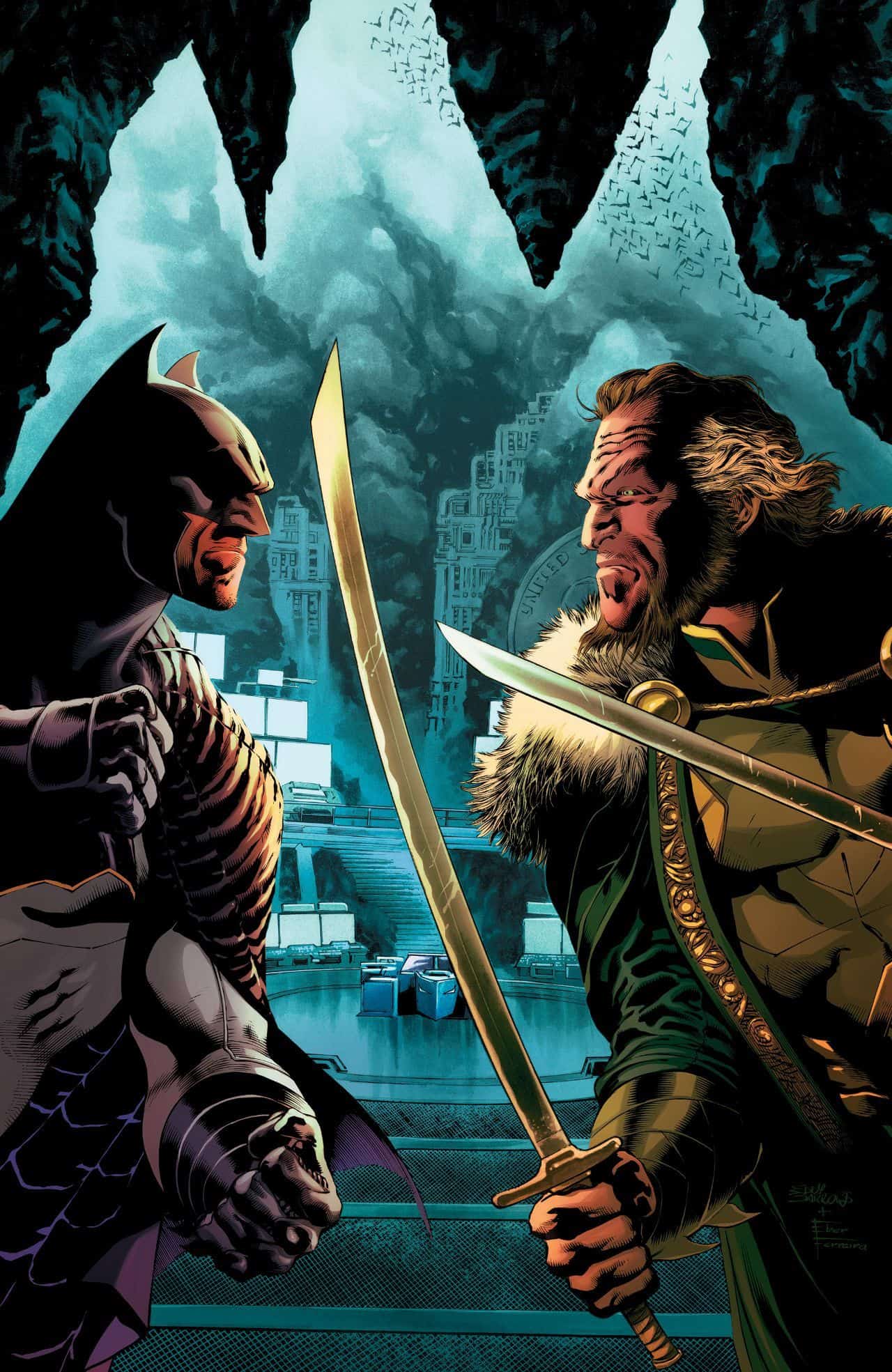 “League Of Shadows” part four! Ra’s al Ghul has the answers Batman needs to take down the League of Shadows…but will he lift a finger to help him? Or would he rather use the League to take care of the Dark Knight Detective once and for all? 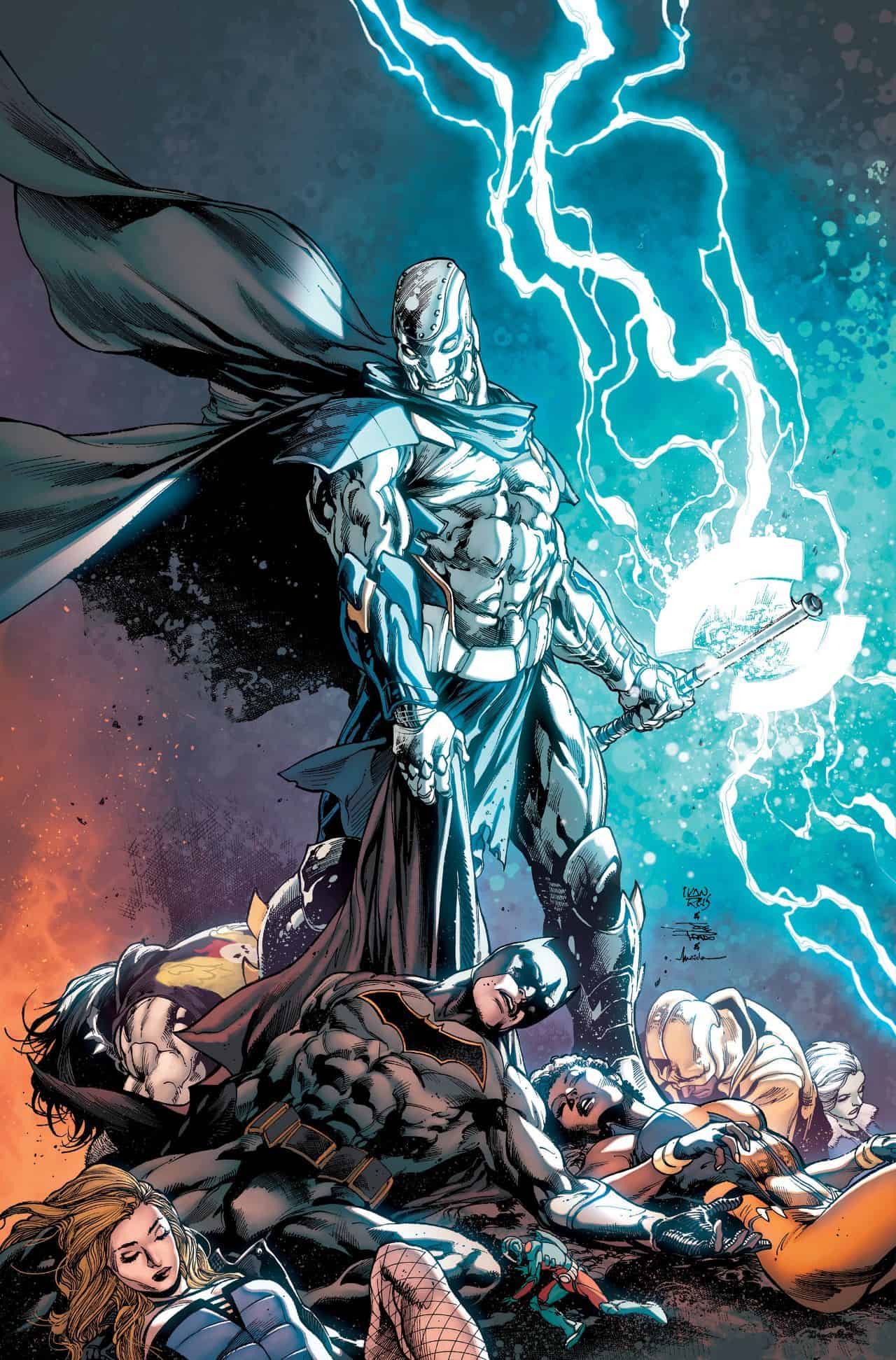 “THE EXTREMIST AGENDA” finale! The new JLA’s first adventure comes to a (multiple-)earth-shattering conclusion as Batman and his team takes the fight directly to Lord Havok. 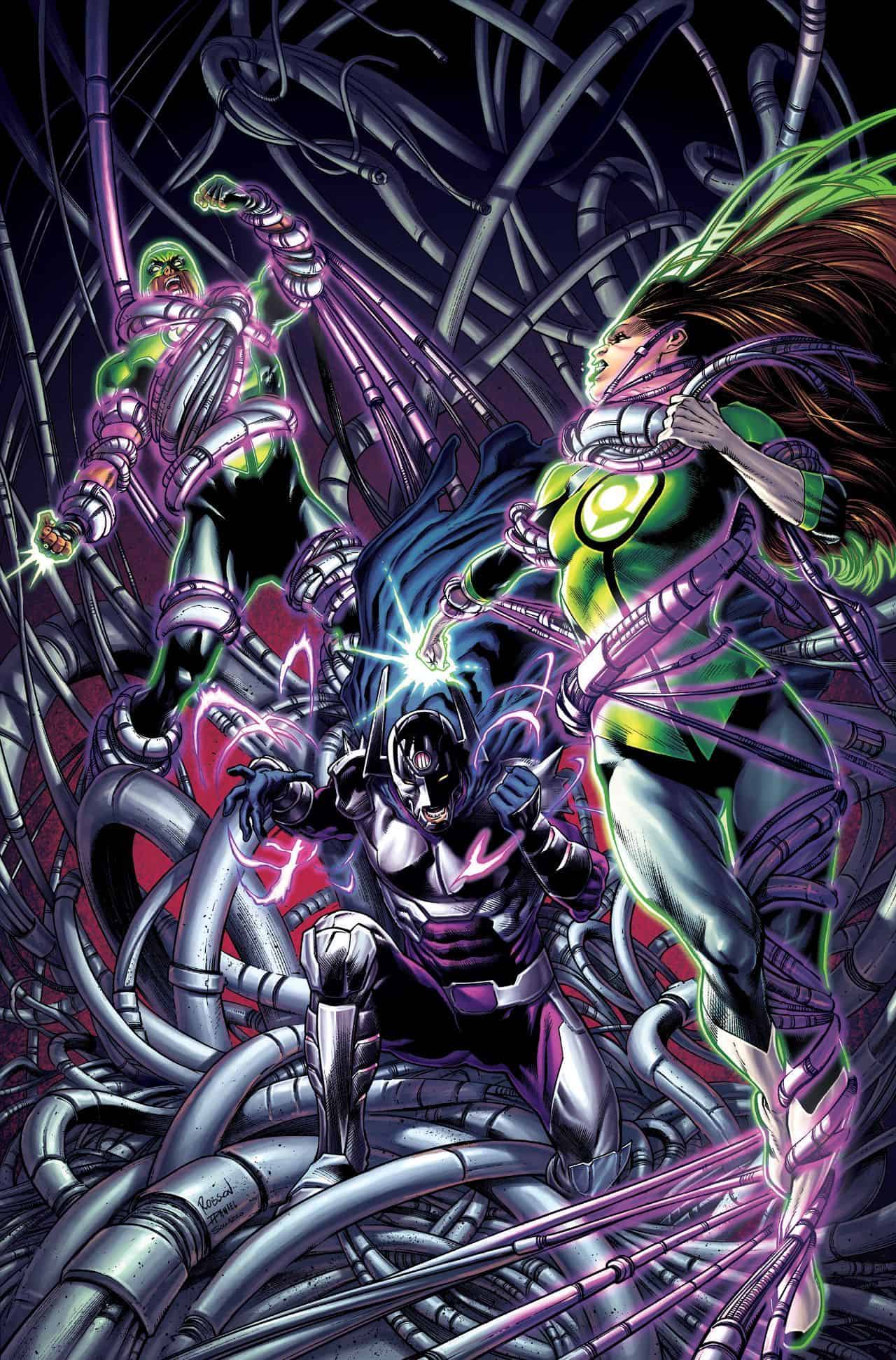 “THE GREEN IMPURITY” part two! Following the events of JUSTICE LEAGUE VS. SUICIDE SQUAD, Polaris strikes! The two Earth Green Lanterns are caught between the two warring personalities of the Master of Magnetism. 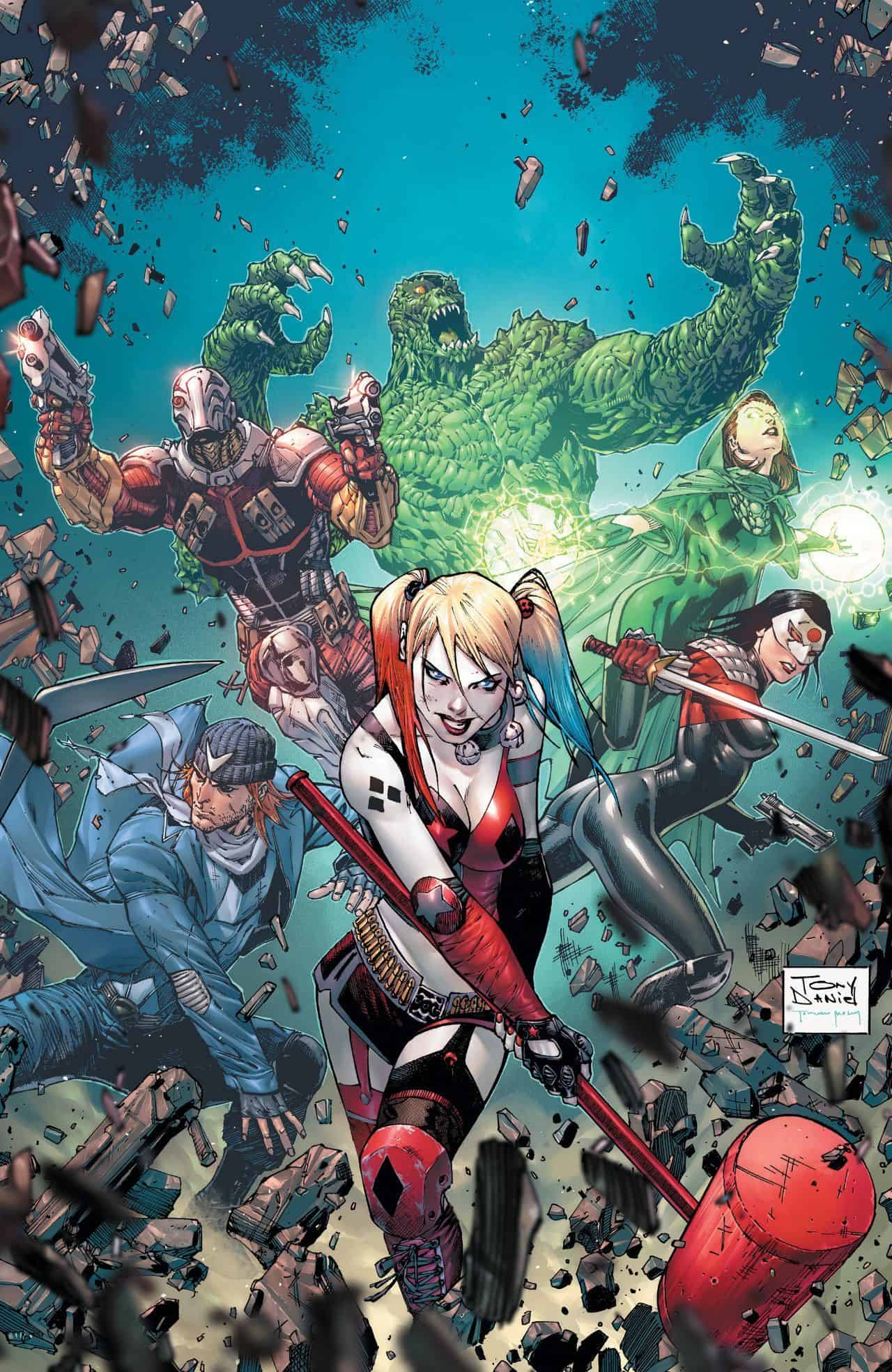 “EARTHLINGS ON FIRE” part one! Amanda Waller is used to getting what she wants—but this time, what Waller wants is something only Lex Luthor has. Striking a deal won’t be easy—or cheap! It’s a war on two fronts as Waller leads a smoldering charm offensive in Luthor’s penthouse while her Suicide Squad tries to open the most heavily guarded safe in all of Lexcorp. 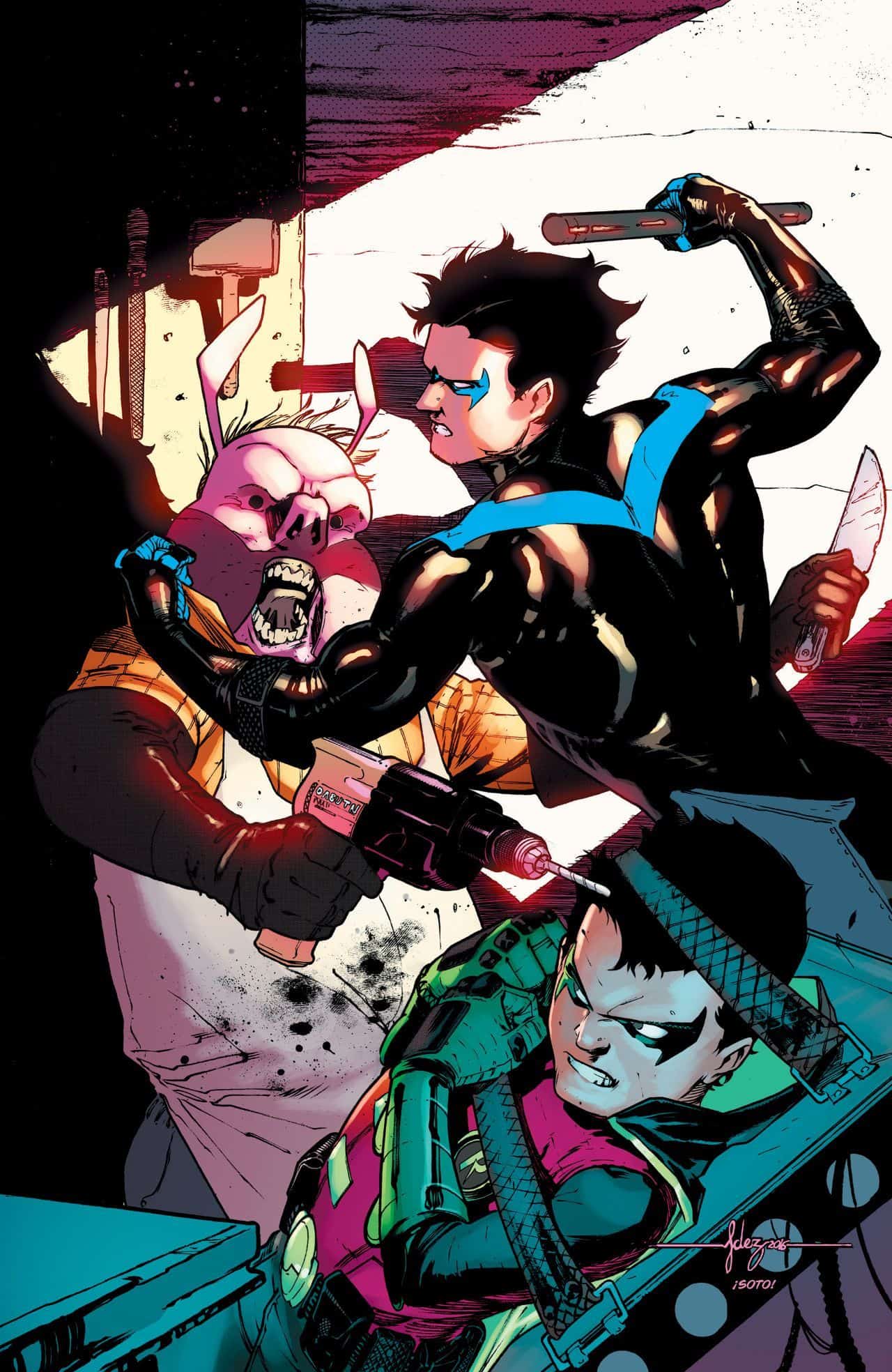 “Nightwing Must Die” part three! Someone Dick loves is being held by one of the deranged foes of his past: Professor Pyg! Nightwing and Robin race to stop Pyg’s attack, but an even darker villain may be waiting for them in the aftermath… 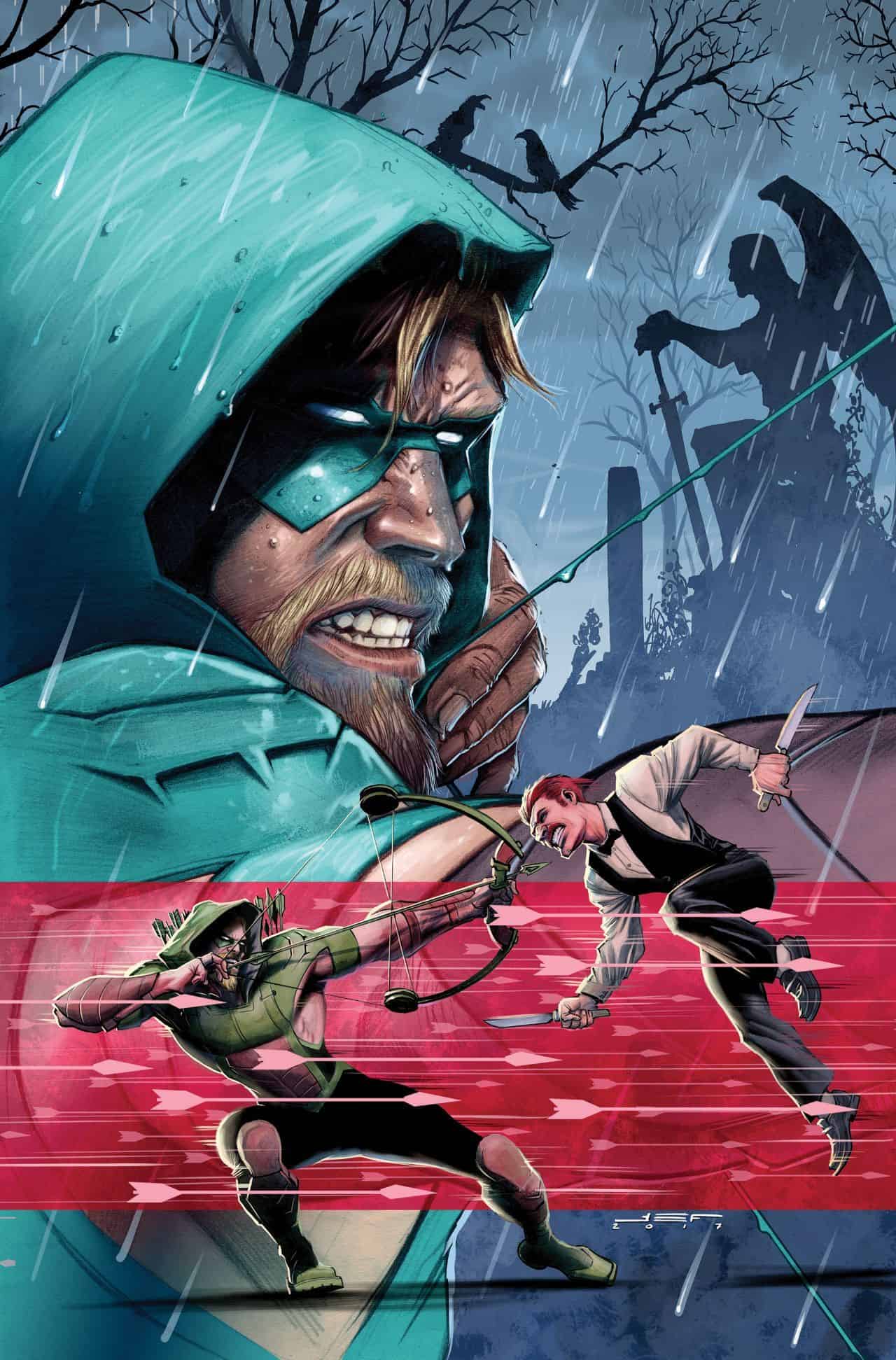 “THE RISE OF STAR CITY” part one! They killed Oliver Queen. They made an outlaw of Green Arrow. Now the Ninth Circle will gather its forces to destroy the hero’s very soul. Buildings will topple. Innocents will starve. Disease will spread. And Seattle will die. The biggest Green Arrow story ever begins here! 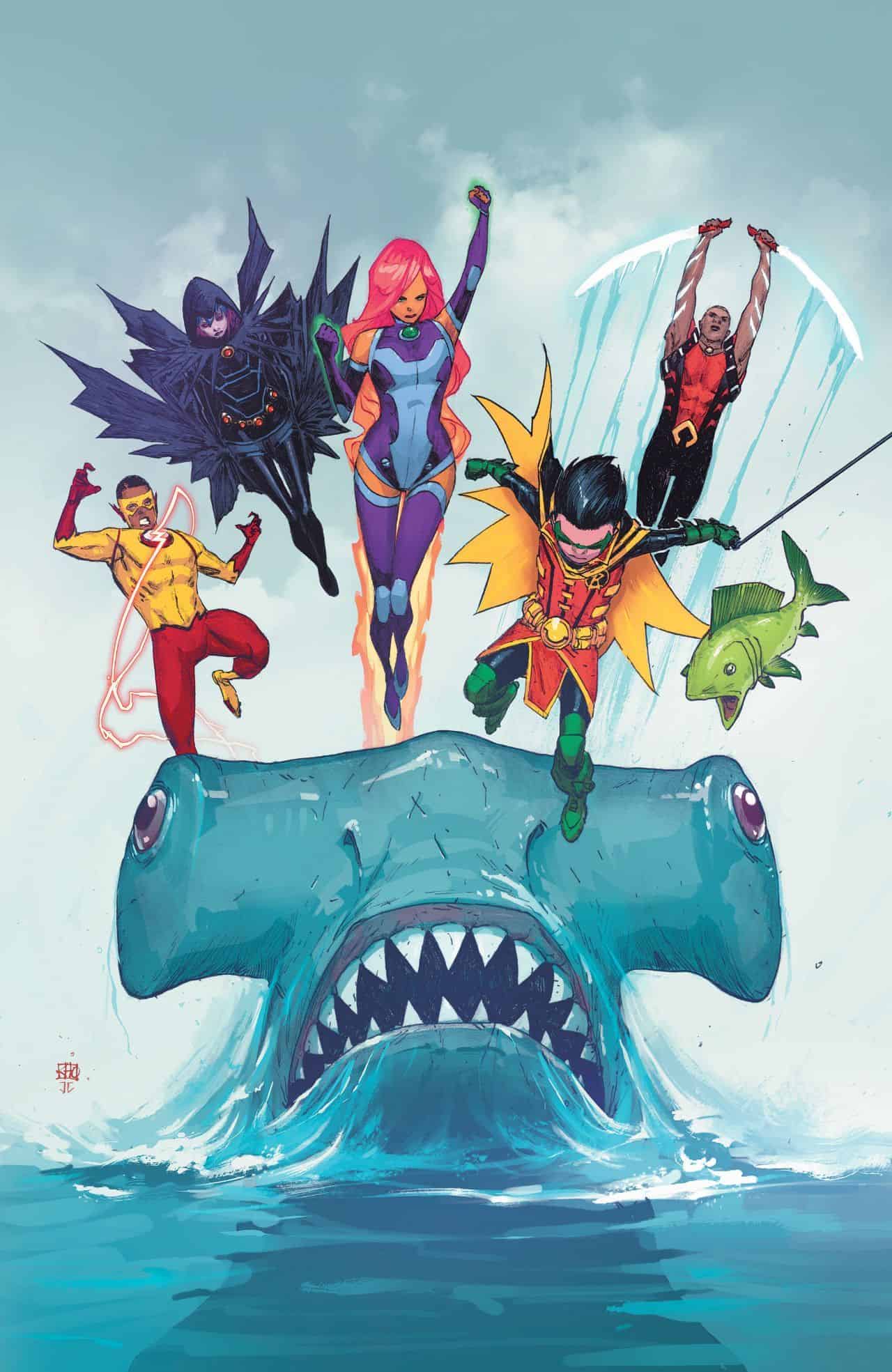 “The Rise of Aqualad” finale! Out of the depths of the San Francisco bay rises King Shark, backed by an army of mutant shark-people! Outnumbered and out…teethed, can Damian, the Teen Titans and their new ally Jackson Hyde defend their city from the jaws of disaster? 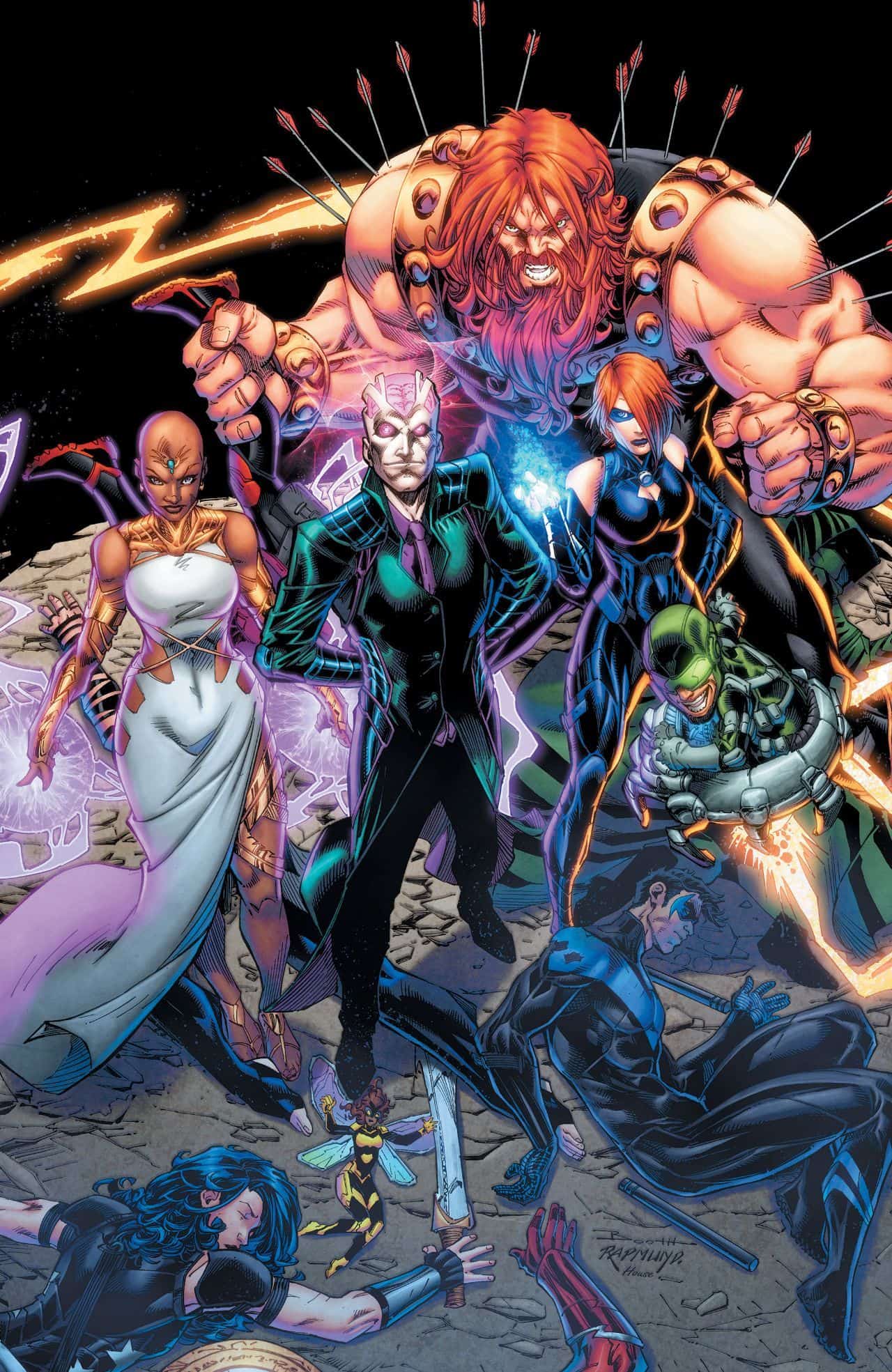 “Made in Manhattan” finale! While Wally and Dick are trapped inside Meta Solutions with the raging Mammoth, Psimon reveals that his employers have big plans for Bumblebee! Can the rest of the Titans rally before the Fearsome Five unleash hell on New York City? 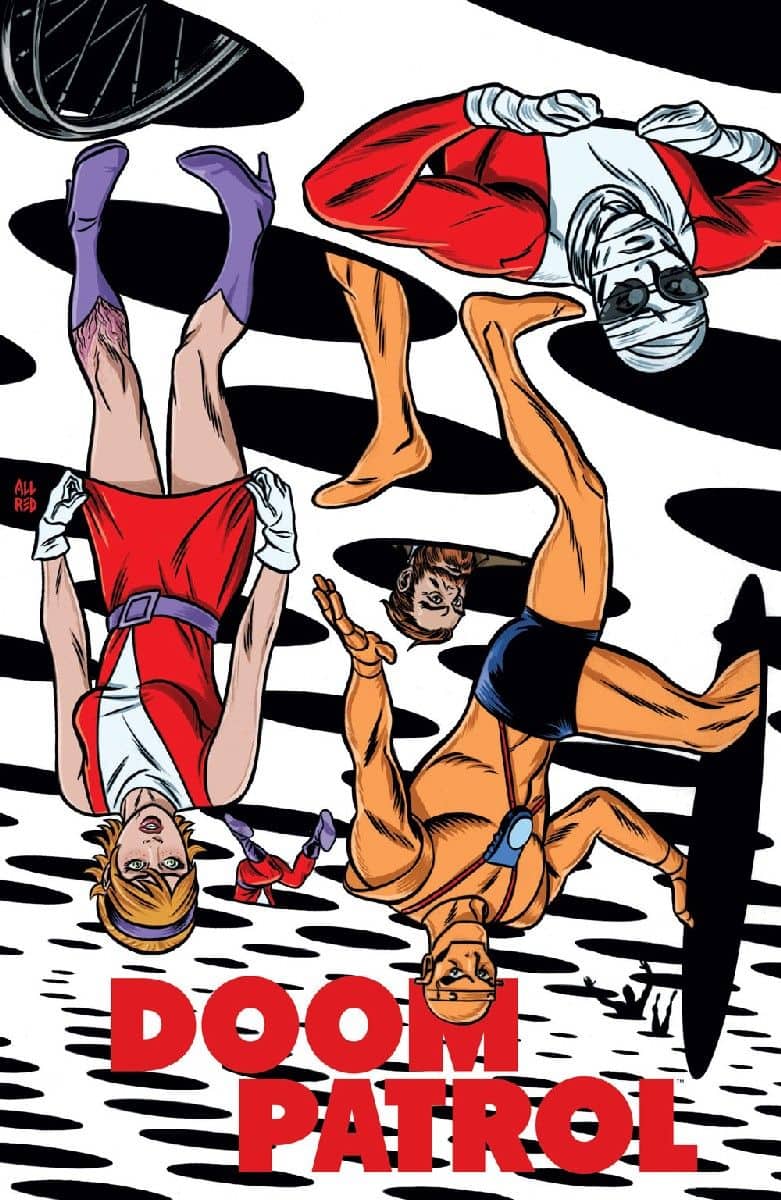 How have you been, Niles Caulder? The Chief is back, and he’s ready to reshape the new Doom Patrol to be just like the old Doom Patrol—a prospect not everyone is happy with. But the team’s former leader hasn’t grown less manipulative in his old age, so nobody make any rash decisions. Pretty sure he’s up to something. Michael Allred (iZOMBIE, Silver Surfer) joins Young Animal for this special one-off issue. 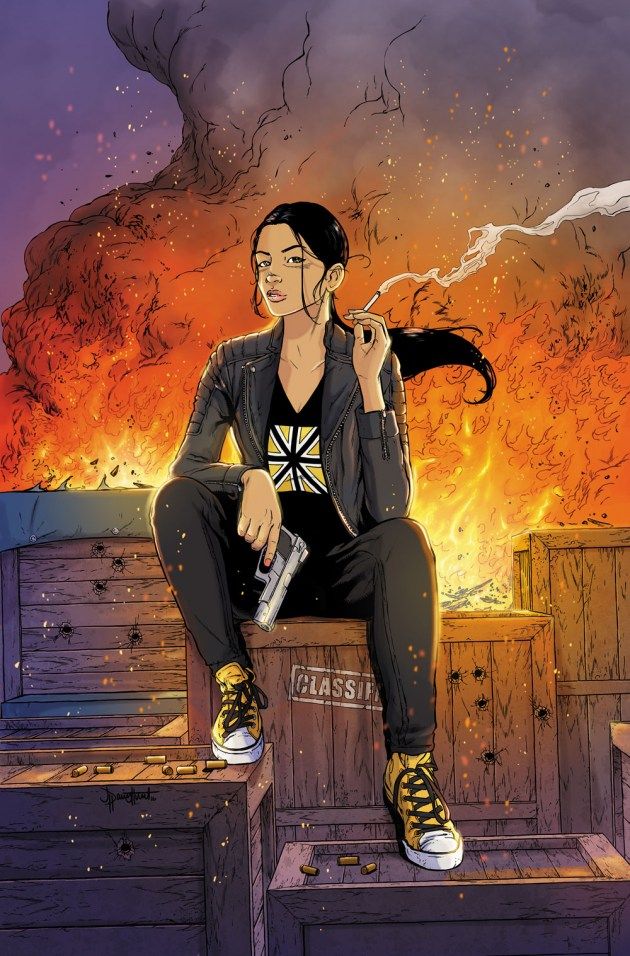 Angela Spica is wounded, alone and hiding from black-ops killers sent by her own benefactor, the man she thought responsible for her well-being—the mastermind behind an assassination attempt the Engineer just foiled. But, unknown to her, she might yet have a chance to survive this terrible day. The Grifter has a plan.

A storm is building. And through it all, a mysterious woman crackles though the electrical devices that inhabit our lives, slipping among the invisible networks of the world.

There’s something new in the world. 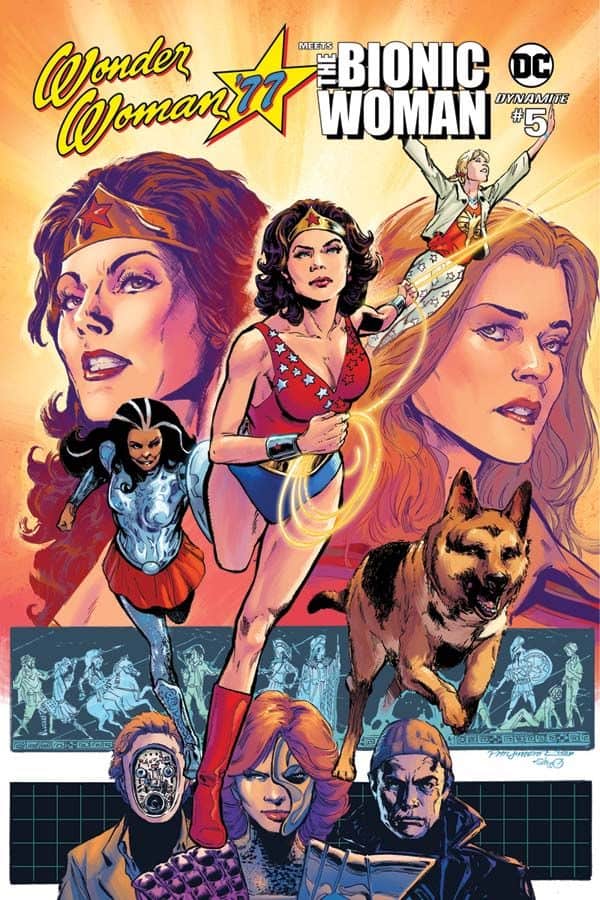 Bullets & Bracelets & Bionics! If it’s always darkest before the dawn, Wonder Woman and the Bionic Woman — along with some familiar faces — had better pray that the dawn comes soon. Because from where the story continues, things look awfully dire. The evil cabal of villains have sprung their trap, and have staged a monumental assault, and one major character is already badly hurt. Our heroines will soon find that nothing is unbreakable! The best-selling team-up fans demanded is written by best-selling author ANDY MANGELS (Star Trek & Star Wars) and illustrated by JUDIT TONDORA (Grimm Fairy Tales).

Benefits Of Installing Glass Splashbacks In Your Kitchen