The show begins with a recap of the return of Scott Steiner and the EC3/Alberto/Lashley stuff. EC3 brings out a barbershop quartet to sing his theme horribly. We get a parade of promos with Alberto and of course, the most important people, the authority figures Bruce Prichard and Karen Jarrett. Bruce makes EC3 vs. Alberto for the GFW Title and the winner faces Lashley at the PPV, and tonight’s match is a cage match. All of this out of a barbershop quartet. Impact in India is announced for next week, and it’s time for Eli-Moose.

Eli dominates round one and ends it with a figure four. Moose hits his top rope Okada-style dropkick. Eli wins round one, but Moose wins round 2. Moose hits the sky high, but Eli hits a white noise. Moose wins by judges’ decision. We get a recap of Rosemary helping Allie last week. Allie says that she isn’t sure why the demon person helped her. Rosemary comes in and calls her little buddy. Matt Sydal talks about the X division. 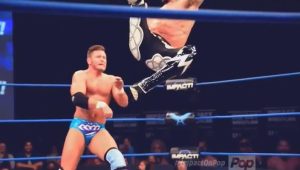 Amber Nova comes out to face Allie. Allie wins with a death valley driver and acts amazed. Well, she is great at playing this green character. JB and Joseph Park ride into the building on a golf cart. LAX faces the VOW for the GFW Tag Titles and win the gold after a long no DQ brawl. McKenzie chats with Joseph and JB. Park says that their training starts now and JB says he’s lost his damn mind. Park doesn’t want to be “kayfabbed”. Awesome. 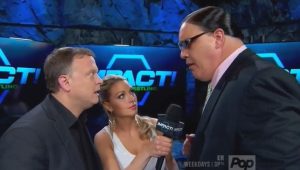 Sonjay Dutt comes out with an eye patch to do commentary for Low-Ki vs. Andrew Everett. Everett hits the standing SSP, but eats a shotgun dropkick and the double stomp ends it. Swoggle is behind Josh in an Impact Wrestling shirt, and the cage match is up. Swoggle gets beaten up by Spud with a hammer. Spud’s in all-black, so I guess he’s turned heel. Alberto’s left thigh is all taped up, and they exchange basic stuff until EC3 hits a Samoan drop off the top. EC3 hits an electric chair facebuster for 2. Alberto lands the kneeling superkick for 2. Alberto hits the double footstomp off the top of the cage to EC3, who never once thought to just stop sitting up. Alberto hits a frog splash to ends it – well, that’s new and a far better finish. 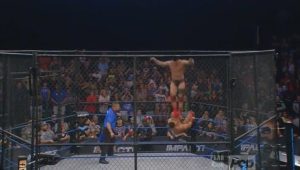 Blu-ray Review: Paws of Fury: The Legend of Hank