In This Corner of the World arrives in November

Fans of international animation should be looking forward to the arrival of In This Corner of the World. The film recently won the Japanese version of the Oscar for Best Animation. Here’s the press release from Shout! Factory: 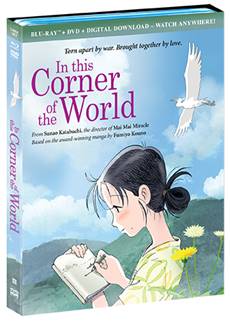 “A gorgeously animated wartime story” – The Globe and Mail

In This Corner of the World

An empowering coming-of-age tale set against the backdrop of World War II, In This Corner of the World is a captivating story about the resilience and triumph of the human spirit. Winner of the Jury Prize at the Annecy Film Festival and the coveted Animation of the Year award at this year’s 40th Japan Academy Awards, this stunningly animated film makes its home entertainment debut on November 14th,  2017 as a Blu-ray + DVD + Digital Download Combo Pack. The release also includes the bonus features A Look at Post-Screening Q&As with director Sunao Katabuchi and producer Taro Maki featurette, as well as 16-page preview of the graphic novel that inspired the film and the original theatrical trailer. Fans can pre-order their copies now by visiting ShoutFactory.com.

Based on the award-winning manga by Fumiyo Kouno, and brought to life by acclaimed filmmaker Sunao Katabuchi (Mai Mai Miracle) and producer Taro Maki In This Corner of the World tells the emotional story of Suzu, a young girl from Hiroshima, who’s just become a bride in the nearby city of Kure during World War II. Suzu’s life is thrown into chaos when her town is bombed during the war. Her perseverance and courage underpin this heart-warming and inspirational tale of the everyday challenges faced by the Japanese in the midst of a violent, war-torn country. This beautiful yet poignant tale shows that even in the face of adversity and loss, people can come together and rebuild their lives.

In This Corner Of The World Bonus Features:
·         A Look at Post-Screening Q&As with director Sunao Katabuchi and producer Taro Maki featurette
·         A 16-page preview of the graphic novel that inspired the film
·         Original Theatrical Trailer