Sami vs. Fenix from last week is recapped alongside the LAX and OGz street fight. Eddie makes threats about caning Kross and Aries. Aries tells him he had his chance and blew it – and he’s dangerous, but Kross is more dangerous. Eddie bonks Aries with the mic and goes to attack Kross and actually gets him to his knees before getting clipped by Aries. Kross jacket choke and a figure four are on. They go to attack him with a chair, but Moose makes a save. Sami vs. Pentagon is hyped up and Sami blames Pentagon Jr for him losing his hair, and the loss to Fenix. Alisha comes in and hugs Moose, and she sounds drunk. 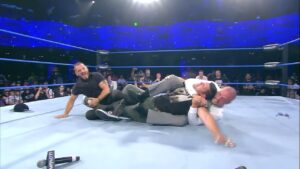 Zachary Wentz is out to face Matt Sydal, and gets 2 on him with a corkscrew crossbody. Josh plugs Sydal’s shirts before Sydal axe kicks the chest. Sydal hits a Paige turner to win. Eli meets with Trevor Lee and Caleb Konley in a very echoey room and Eli tells them that they aren’t friends. Some guys walk in and the Cult of Lee cuts a promo on them for a match. Cage talks about being better than anyone and we see him destroy Lashley – with them saying he’s the future and Lashley’s the past.

The Legion of Boom faces James Storm in the GWN match of the week. Fallah Bahh gives KM a Bahh-faced mystery bag, which worries KM. Impact in Mexico is hyped up before we get a Pentagon vs. Sami recap. The Desi Hit Squad faces KM and Fallah Bahh in matching Fallah Bahh gear and KM and Bahh do stereo offense. It’s amazing to see KM do his spots, and he hits the powerbomb lungblower and then Bahh wins with a banzai drop.

Joe Hendry, Grado, and Kat are backstage with Joe hyping up Grado before Kat and Joe leave and Scarlett chats with Grado amid smoke. Scarlett wants him on her show, but she needs a favor for herself and her manservant Bobo. And then Grado does some poledancing – well, they were taping at a nightclub and made use of it. Scarlett is not amused by Grado going up to her in his speedo, but Bobo is amused and eating popcorn before she smacks his ass and he falls off the couch.

Kiera Hogan is out to face Alisha, who now has no last name because they’re separated on-air. They have a fairly sloppy match until Hogan wins a spinning fisherman suplex. Allie talks about losing to Su Yung and that making her realize that she needs to beat her. She wants to do that, but also has to look out for Tessa – so she needs to take them both on at once in a triple threat match. Johnny Impact is at a pool party and gets jumped by Kongo Kong. Tessa cuts a promo saying that she wants a title shot – so if Allie wants the triple threat, it has to be a title match.

Rich Swann talks about signing with Impact and its huge buzz on social media. His ultiamte goal is the X Division title, and put his name alongside the greats like AJ Styles, Amazing Red, Chris Sabin, Alex Shelley, and more have helped build it. Pentaon tells Sami that a Mexican death match is a battle for honor and he has zero fear. Aries tells Eddie that he thought he might’ve knocked some sense into him, but he didn’t – so they’ll end Eddie’s career. The Cult of Lee faces their jobber team before the Gravy Train gets countered and the jobbers win.

LAX goes back to the block and celebrates while we get a Miami Vice-style montage with Hernandez driving up and doing a hit and run off-screen to a kid. Redefined’s card is recapped, with Fenix facing Cage for X Title, Tessa vs. Allie vs. Su for the KOs title, and Moose teaming with Eddie against Aries and Killer Kross. Sami comes out looking crazed, while Pentagon is out in slick black and red gear before using a Cero Miedo sign to psych him out even more.

Sami wants a big chop and gets two of them. Pentagon sets up two chairs, but Sami powerbombs him through the chair bridge for 2. Pentagon hits a flip dive on Sami through a table. Pentagon beats him with a pinata with a staple gun inside. Sami demands some staples, so Pentagon staples his shoulders and then nuts before stapling his hat to his head! AND THEN RIPPING THE HAT OFF! Backstabber out of the corner for 2. Sami low blows him and gets a groin claw and then exchange big kicks on the floor. Sami gets a bat and hits him with it when a can is over Penta’s head. Penta hits a running DVD through a table on the ramp. Penta opens a pinata full of LEGO and gets somet hrown on him before eating a package piledriver for 2. Penta kicks him low and hits a Fear Factor 2.9! Pentagon goes up, but eats a pinata to the face and a super piledriver off the top gets the win!