Tessa vs. Su Yung is recapped before we get a rundown of LAX vs. the OGz. Johnny Impact vs. Aries is hyped up by showing Austin’s group’s beating of him last week. Aries and his goons are out with gold couches mid-ring talking about running the show. They brag about taking out Eddie Edwards and Moose says he should bring Alisha’s wife some champagne. Fallah Bahh and KM interrupt with KM saying that Aries calls himself the greatest man alive – so he’s gonna call him a liar! He’s a bad person and a worst World Champion before hyping up Bahh as being his best friend. Aries gives Fallah Bahh a shot at the title as a way to mock him. 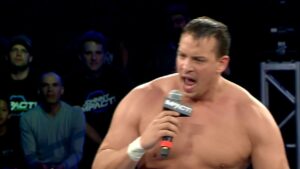 Lucha Bros. face the Cult of Lee in an outstanding enhancement match. Everyone gets a chance to shine in it, with Lee’s stiff shots helping him a ton. Pentagon hits a superkick into the post before a super lungblower and Fear Factor with a spike ending it. OVE interrupts and says they’re the best trios group in the world. He wants a three way match against the Lucha Bros. and Cage at BFG. KM and Bahh chat, but Bahh is nervous. The seek out a former champion and want Eli’s advice. Eli tells him to get a bowl instead of a cup.

Von Erichs vs. the BroMans at Slammiversary a few years ago is the GWN match. Allie and Kiera talk about Tessa being entitled – but not deserving to be put in a coffin. Tessa says she’s the champion and she’s undeniable. Alisha is out to face Katarina. Joe and Grado, in a terrible tracksuit are out. Don talks about he’s dressing far worse now. Joe showcases a custom video for her that includes a line about her pirate brother. Alisha schoolgirls her for the win. Bahh gets a bowl before KM explains the joke and Scarlett tells them she’s proud of them. Scarlett in this nightclub setting is so perfect.

Johnny and Josh talk on Skype and we see the beating he took last week. Very little of note is said – but Johnny is of course, serious about the title match. The Fraternity is out to face LAX and they just steamroll them with signature spots and the street sweeper to end it. King and the OGz are out to mock Konnan and says he wishes the kid died to end this cease fire. Aries cuts a cocky promo on taking out Impact and now taking out Bahh tonight.

Rich Swann hypes up Fallah Bahh before Sydal interrupts him and Swann says he wants to face him in Mexico. The Impact hall of famers are recapped before we’re told that next week, the newest member joins it. Kongo Kong comes out to face Cage in a fun highlight-filled match with each guy trading dives. Cage hits an F5 and wins it. Cage accepts the trios challenge from OVE. Bahh vs. Aries is mostly comedy, with backrakes aplenty. Bahh gets a Samoan drop for 2. Discus elbow is countered by a belly to belly for 2. Bahh avoids the brainbuster with a NO NO NO and a crossbody for 2.9! A banzai drop is met with a kick and Aries hits a sunset bomb into a last chancery for the submission. The trio beats up KM with a chair necktie shot to close the show.