A new WWE Then Now Forever video starts the show off. Baron welcomes Steph to the building by singing Happy Birthday terribly before HHH leaves. Steph proceeds to bury Corbin for being selfish and says that he needs to find two partners to face the Shield tonight. Dean says they’re still standing while Roman says you could read their resumes, but it would take all day – to massive boos. Roman says all the titles they have are the keys to the kingdom and they have the power to change lives. Corbin comes down and botches Steph’s name and bringing out Braun and the Dogs of War. Braun talks about this now being a 4-on-2 issue with Dean getting tired of the Shield. Dolph stirs it up more by saying Roman and Seth have everything and he has nothing. Drew says that Dean took him to the limit – thus making their match last week more important. They’re trying to make this a Hogan vs. Orndorff situation – the problem is that they’re telling this entire story in 10 minutes instead of over a longer period of time. 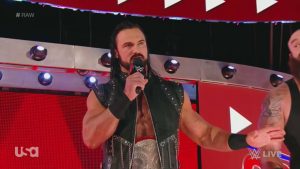 Everyone comes down for a brawl before Baron ends it. Drew and Dolph vs. Revival, Lashley vs. Elias, and Balor faces Jinder next. Bayley comes out before Finn, and then Jinder is out with Sunil and Alicia and we get soem exciting chinlock action. Jinder hits a knee to the gut and locks on an abdominal stretch before Finn hits a parade of forearms. Jinder gets 2 off a distraction schoolboy before clubbing away. Sunil and Alicia argue before Bayley slaps Alicia and hits the Bayley to belly to Sunil and Balor wins with a distraction schoolboy. This is quite the usage of former Universal and WWE Title holders. Jinder beats up Sunil because Jinder had something good with the goon – so like Alberto with Ricardo, let’s just nix that for no good reason. And then Jinder meditates with Alicia. Recap of Ronda vs. the Riott Squad from last week. Nattie and the Bellas come out to face the Riott Squad next.

Nikki charges over Liv, who is now described as a “juveline delinquent”. Double modified leg avalanche by the Bellas – so that’s the one time they can ever properly be compared to the Rock ‘N Roll Express. Yes kicks to Liv by Brie result in Liv being knocked loopy. Ruby gets a long headlock on Brie to as Renee says, show off this new style. Babyfaces get a TRIPLE SUPLEX! Dang, no triple rowboat spot to follow it up! After a break, Sarah grinds away on Brie with an armlock. Wacky double hair mare straight out of the ’80s hits. Nattie Germans Sarah gets a sharpshooter – after a blind tag and the riott kick ends it. 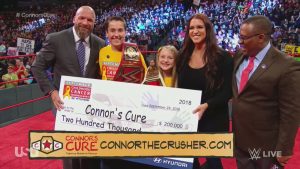 The whole roster, Steph, and HHH come out for Connor’s Cure stuff. So right in the middle of the Braun vs. The Shield feud we’ll get them in a Connor’s Cure segment? Jesus Christ… At least wait untli the program’s done to do this stuff. Steph talks about the company allowing kids to create personas and giving the famlies parking and food vouchers to help out. We get a video montage of the roster dipping their hands in paint to put on a car before a Hyundai is showased with the prints. WWE congratulates themselves some more and fans are given replica belts. The Hyundai Hope on Wheels rep says YES LET’S GIVE ANOTHER BIG ROUND OF APPLAUSE FOR WWE before showing off a $200,000 check for Connor’s Cure.

Dean and Dolph argue backstage. Chad Gable is mid-ring to continue his trek on the aimless Raw mid-card treadmill. Konnor says some stuff backstage. Konnor gets a long headlock before Chad hits a forearm, but eats a Vader-esque vertical bodyblock. Shockingly, Konnor wins this with a disout dominator and Roode looks distraught. This may have actually been Konnor’s first win on WWE TV since NXT. Backstage, HHH is asked if he has a broken soul. HHH says he sold his soul a long time ago and they won’t be fighting in suits – he’s coming to end it. 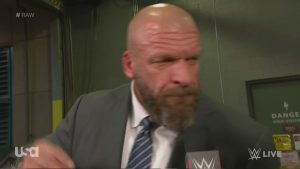 Tag title match is up. Dash works over Dolph and gets a Rings of Saturn before Dolph cradles him. Dawson comes in and chops Dolph. Dash comes in with a splash for 2 and he hits a tornado DDT on the floor to Drew. Revival flies with a double-team lariat for a 2.5! Drew tags in and kicks Dash’s ass for a bit. Dash gets 2 off a powerslam counter with Dawson dropkicking into him. Drew hits the headbutt and the claymore/zig zag ends it. This was short-ish, but fanastic while it lasted.

A new chalkdboard-style graphic airs to hype up the WWE Network. The Kevin Owens Show is next, but first, Elias sings and says they don’t deserve a performance from him. KO puts over Cena as the best ever and the man he beat in his first night in WWE. They mock Lio Rush and he says he’s the 23 year old piece of gold – and they give him a booster seat. Elias vs. Lashley is a bunch of nothing until Elias chopblocks him and locks on a kneebar unilt Lashley slugs him. Lashley hits the delayed suplex and lands a suicide spear before KO attacks. Drew and Seth chat and Seth plants the seeds for Drew to turn him agaisnt Dolph. 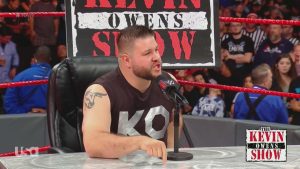 Nia comes out with Ember Moon and a long ad for Night School airs before she faces Alicia. Ember cannonballs onto Mickie on the floor. Backstage, Drew tells Dean that Seth stabbed him in the back before. They’ve done things a bit too heaviliy-handed, but overall, they’re doing a good job of weaving the past into the present. Long hype video for HHH vs. Taker airs. The Shield comes out to face Baron Corbin and his cohorts. Lashley vs. Owens is announced for Raw next week alongside Ronda vs. Riott.

AOP comes out with their mini cosplayer to team with Corbin. Razar is put over huge with Roman as a former MMA fighter who knocked guys out in 30 seconds. Baron’s chokeslam backbreaker gets 2, as does the deep six. The Dogs of War are at ringside on chairs, and AOP really has some great chemistry whenever they square off with all the Shield guys. AOP feels special when they’re in there squaring off with the Shield – put these two teams in a tornado rules match and make AOP into stars. Dean lariats Baron to the floor and Dean baseball slides the trio of heels. Roman’s Superman punch hits before the stomp takes out Corbin. Dives aplenty from Seth! Dirty Deeds to Corbin before Roman spears him to win. Dean is between his brothers in the ring and the Dogs of War and stands alongside his brotherhood with their fists together. They told a show-long story and told it well – good stuff. 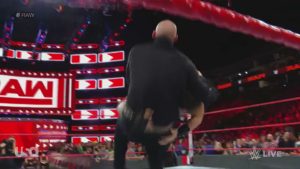