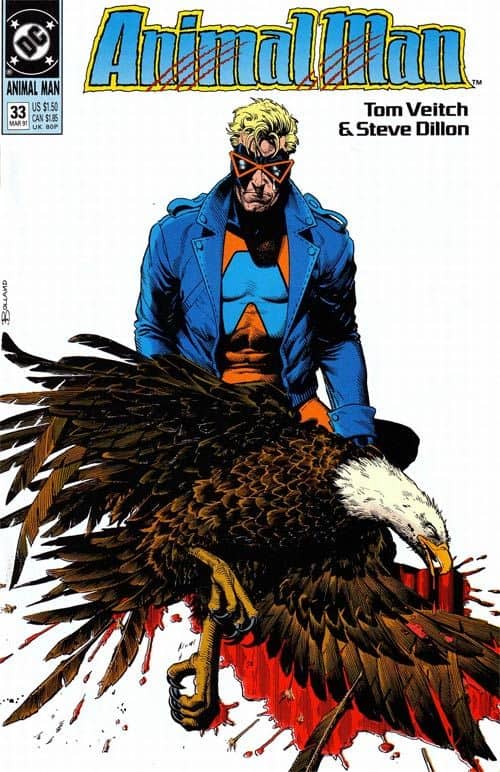 I jumped back onto Animal Man at the start of Tom Veitch and Steve Dillon’s run.  I liked the clean artwork by Dillon (RIP), and wanted to see what was going on with the Baker family again.  I don’t remember a whole lot from this run, except that it was in many ways the most normal of any Animal Man comics, while still pushing the boundaries of what a mainstream, non-mature readers only superhero series could be. 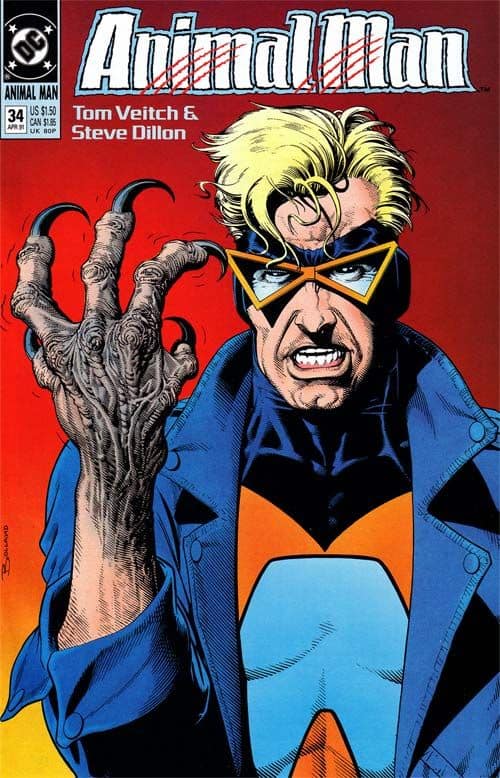 It’s an odd ending, what with the focus shifting to the screenwriter’s perspective, and with some subplots left unresolved by Veitch.  It kind of feels like, with the birth of Vertigo coming six months later (and the move to “suggested for mature readers” status coming before that), editorial decisions were made to truncate Veitch’s run, and to make the series darker (although in a lot of ways, this run was already plenty dark).

One thing that stood out to me after so many years is how my memories of this run were inaccurate.  If you were to ask me, before I started to reread this series, what stood out in my mind, it would be the way that Morrison and Veitch both portrayed Buddy as a weird hero who had a relatively normal domestic life.  The reality is that very little of these runs showed Buddy’s family in a normal way. Almost as soon as Veitch took over, he had Buddy’s powers running wild and it causing chaos for his family. With Ellen leaving, and later Cliff running away, there was very little time and space given to Buddy have anything like a typical life. 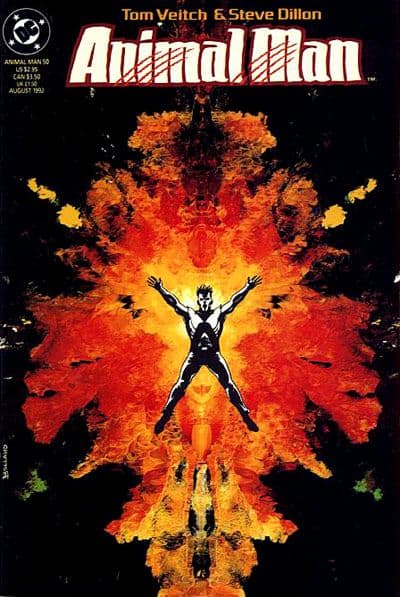 One of the stated purposes of this run was to explore Buddy’s powers, and I’m not sure that Veitch was successful at that.  The early issues, as the Antagon was stirring, and it looked like Stone was a threat to Buddy, had Buddy questioning the nature of his abilities.  As we got closer to the big ending though, we were given a hastily put-together explanation that roots Buddy’s abilities in Native American lore and tradition.  That could have worked, as could Tristess’s rather unexplained presence, but it’s hard to believe that two African-related characters, Vixen and B’Wana Beast, would be part of the same thing, simply because of their animal-themed identities.  It felt like a bit of a cop-out, or like it was suggesting that all tribal people are similar, and probably should have been workshopped more, or explained better.  It also removes the yellow aliens from Buddy’s origin, but I’m not sure if this is currently considered canon or not (I don’t remember it being discussed in Jeff Lemire’s New 52 run).

There is a lot to like in this run though.  I enjoyed Travis Cody’s character, and also the sub-plot involving STAR Labs and Buck Samson (who, I guess, never did get to dump his radioactive dog corpses in a salt mine on indigenous land).  I also liked the way that Buddy and Ellen had to explore their relationship and how they could make things work with all the weirdness that Buddy brings into their lives. I also liked the introduction of Mrs. Frazier, Ellen’s plain-speaking mother (although it’s weird that Veitch didn’t give her a first name).  I also liked seeing Cliff evolve from a Bart Simpson stand-in to becoming his own, kind of difficult, character.

At the same time, the way that Cliff got written out of the book was a little odd.  I also wonder what Veitch was planning on doing with Les Decker, the comics writer who liked to dress up like his character, The Penalizer, and scare away drug dealers.  I don’t remember if Decker shows up again in the subsequent run, but if he doesn’t, I’m not sure why Veitch gave him the space he did.

It was a treat seeing all this early Steve Dillon artwork again.  I loved Dillon’s runs on Hellblazer and Preacher, but found that a lot of his work after that (like on Wolverine: Origins) became a little too clean.  This early stuff, which he inked himself, was scratchier and a little rougher than what he became, and that really suited the story. He was a massive talent, and I miss seeing his work.

Tatjana Wood has still been the only colourist to work on this title to this point, which is impressive.  Brian Bolland’s covers continue to amaze during these issues, marrying his sense of whimsy with the dark stories that Veitch was telling.  Bolland really is one of the all-time greats.

I’m very much looking forward to getting into Jamie Delano and Steve Pugh’s run, as they took the book over to Vertigo and set Buddy up as a bit of a cult leader.  I remember this being one of my all-time favourite runs, and am curious to see how it has held up.

This run has been collected, and can be found here:
Animal Man Vol. 4: Born to be Wild