With that, at press time WWE has released a preview for Smackdown 1000. It is not clear if more items will be added to the preview as WWE tends to do.

SmackDown celebrates its 1000th episode in epic fashion this Tuesday. Qualifying matches for the WWE World Cup continues with the return of Rey Mysterio, who will face Shinsuke Nakamura for the right to enter the tournament to determine who is the best in the world at WWE Crown Jewel. Plus, Evolution reunites, as Triple H, Batista, Randy Orton & Ric Flair will all be in attendance. So will The Undertaker. What does The Deadman have in store? Find out that and more during SmackDown 1000, this Tuesday at 8/7 C on USA!

Did you think SmackDown 1000 couldn’t get any bigger? Think again!

In his first match on SmackDown LIVE since 2014, the returning Rey Mysterio will square off with United States Champion Shinsuke Nakamura in a WWE World Cup Qualifying Match.

It’s sure to be a thrilling qualifying match, as Mysterio will look to use his speed and inimitable high-flying ability to keep The King of Strong Style on his toes, while Nakamura will attempt to stop The Ultimate Underdog in his tracks with his arsenal of devastating strikes.

Who will walk away from this dream match with a place in the WWE World Cup? Find out during SmackDown LIVE’s historic 1000th episode, this Tuesday at 8/7 C on USA!

On SmackDown 1000, Rusev goes one-on-one with The Miz to determine one of the final SmackDown LIVE Superstars for the WWE World Cup.

The Bulgarian Brute will look to move past the last few weeks, which saw Aiden English try to drive a wedge between Rusev and his wife, Lana. The Miz is also trying to exorcise demons, as he attempts to get over his lightning-quick loss to Daniel Bryan at WWE Super Show-Down two weeks ago.

The winner of this battle will join John Cena, Kurt Angle, Randy Orton, Jeff Hardy, the winner of Dean Ambrose vs. Dolph Ziggler, the winner of Seth Rollins vs. Drew McIntyre and the winner of Rey Mysterio vs. Shinsuke Nakamura in an eight-man tournament to determine the best in the world. Who will advance to WWE Crown Jewel?

The Undertaker comes to SmackDown 1000

On what is sure to be a historic night, one of WWE’s greatest legends will be in attendance, as The Undertaker will make his presence felt at SmackDown 1000.

The Phenom was the top dog on the blue brand for a number of years, leading the way as the World Heavyweight Champion while taking part in unforgettable rivalries against fearsome competitors like Batista, Edge, Brock Lesnar, Randy Orton and his own brother, Kane.

Fresh off devastating Triple H & Shawn Michaels at WWE Super Show-Down, what does The Deadman have in store? Find out during SmackDown’s 1000th episode, this Tuesday at 8/7 C on USA Network! 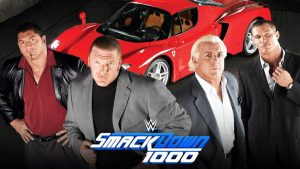 The band is back together.

At SmackDown 1000 this Tuesday, Evolution reunites – Triple H, Batista, Randy Orton and Ric Flair will be in Washington, D.C. for the historic event.

Evolution is comprised of some of the most successful Superstars in history – there are 49 world championship reigns between the four members, who ran roughshod through WWE from 2002 to 2005, then rode again for a vicious rivalry with The Shield in 2014.

What does Evolution have in store as they make their first-ever appearance on the blue brand during this groundbreaking night? Find out during SmackDown’s 1000th episode, this Tuesday at 8/7 C on USA Network!

I do, naturally, expect more with A.J. Styles and Daniel Bryan ahead of their WWE Championship match at Crown Jewel. 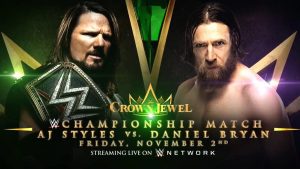 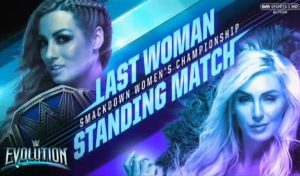 Should be a fun night.