Happy Hawkman Day! You Know What DC Comics Should Do To Celebrate? Bring Back Darkwing!

I had hoped this was the DC Rebirth version of Deron Ved aka Darkwing during Dark Nights: Metal or during Hawkman’s new series, but he hasn’t shown up yet.

He has an interesting origin from 1986’s Hawkman #7 (above and below).

He even has a classic Who’s Who entry!

He first appeared in Hawkman #3.

Darkwing last appeared in Hawkman #11, but…

…a mini cross-over with Hawkman #9…

While Darkwing’s costume would need to be updated for 2018, it and he was striking on the cover of 1986’s Hawkman #8.

He seemed like a big deal then, although that was short-lived, but he can be again with a costume upgrade and clear purpose for 2018. Although, his name could possibly need to change to avoid comparison and ridicule associated with… 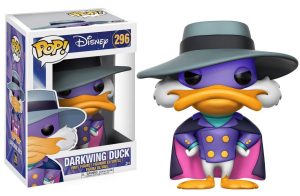 …Darkwing Duck! That was a animated TV series that last three seasons, but only two seasons are available on DVD.

He appears in 37 issues of Invincible including the final issue in 2018’s extra-sized Invincible #144 (spoilers here).

What say you? More Darkwing in DC’s future? Not to be confused with DC’s Deathwing.