Vince comes out and talks about Raw changing with the times and now it’s time to change. Steph comes out and interrupts him. HHH and Shane follow and Steph talks about not doing a good job of listening to the fans – they’ve been using middle-managers. HHH says the days of absentee management are over and they’re all taking back Raw and Shane says that goes for SmackDown as well. Baron Corbin comes out and gets booed out of the building. HHH tells him that if he wants to keep his job, he just has to beat Kurt Angle. Heath is the ref and he spends his time looking at a broken turnbuckle while Crews, Roode, and Gable help Kurt. Shane makes it no DQ, so Heath joins in too. Everyone does what they did to him last night and Kurt pins him after an Angle slam before hitting another one through a table. 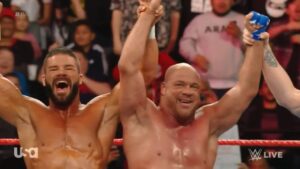 Balor vs. Dolph is a fine little match, but nothing special until Drew comes down and brawls. This isn’t a DQ for some reason and Dolph gets 2 off a fameasser. Drew beats up both guys and now it’s a DQ and he lands the headbutt on Dolph and the claymore on Balor. Dean comes out with his belt and a riot squad. He should watch his Shane Douglas ECW stuff on the Network, because this won’t go well. The heel champion issues an open challenge and Tyler Breeze comes out to a mild reaction. Cole talks about Tyler Breeze looking great on NXT against Ricochet and he wants to do that now on Raw. They have a good short match that does give Tyler a lot of chances to shine, but he falls to the snap Dirty Deeds. Dean tells the SWAT team to leave, but one superkicks him and it’s Seth. He beats Dean up until the goons save Dean.

Shane tells Drake and AOP that he’ll give them the chance to become champions against in a multi-team match because automatic rematches are gone. An NXT hype video airs showcasing Lars, Lacey Evans, Heavy Machinery, and EC3 are on their way to the main roster – with EC3 getting hyped up with a goofy striptease video. Lio Rush and Lashley are out to pose and Lashley smacks his ass a bit. Sami is coming back soon too, seemingly as a babyface. LHP rules are gone while Cole brings up Drake being GM of 205 Live and the Shatter Machine hits Bo and gives the Revival the win.

Seth and Baron bicker a bit before brawling. Great – so now Dean can retain with Baron’s help at some point. Ronda comes out and recaps what she did last night, including beating Nia and getting revenge on Becky and Charlotte. She defines the world “champion” for a while and then the Raw womens roster bickers before Steph makes a number one contender’s gauntlet. Bayley faces Alicia and gets a quick cradle after a big boot. Bayley takes out Dana with a belly to Bayley. Kevin Owens is returning soon. Mickie James faces Bayley and they have a pretty long match by gauntlet match standards. Mickie works on the knee constantly and gets the win with the Mickie DDT. Ember Moon is out and beats her with the Eclipse. Ember faces Nattie next, and loses to an O’Connor roll. Nattie faces Ruby and beats her with a schoolgirl. Sasha comes down in her Wonder Woman gear and loses to the sharpshooter. Ronda and Nattie exchange a glance but walk out as friends.