Raw starts off with Becky coming out and Steph saying that she wants to see Becky vs. Ronda as much as anyone – but Becky needs to be cleared first. Becky tells her to not take her moment away from her and if she doesn’t see the doctor, then she’ll suspend her. Becky slugs her and then lands a series of shots to the air surrounding various parts of Stephanie’s body. Becky goes for the disarmher, but her knee goes out on her and then she gets escorted out by Adam Pearce. Ronda faces Liv in a super-quick match before tapping her with the armbar. Great bit where Liv goes for the Matrix bridge and Ronda punches her stomach. Sarah Logan goes after her and suffers the same fate to seemingly set up Ronda vs. Riott for the PPV. Ruby says she can and will beat Ronda and she’ll beat her for the title and while she’d love to face her tonight, Liv and Sarah are hurt and need her. Okay, now that’s perfect heel logic and I love it. 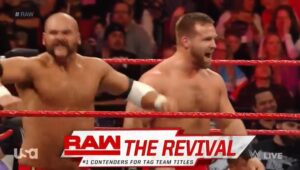 Heavy Machinery come out to face the Lucha House Party, the B Team, and the Revival before we get a Boss and Hug Connection promo before this match. Nikki and Foxy will face them because the Fox embraces the chaos and then she yammers on about chaos for a while. Boy has WWE taken all of what made her act work and NXT and sanded any rough edges off of it. Otis works great in there with Wilder. Tucker gets low-bridged and a shatter machine takes out Bo so they’ll get a title shot at the Chamber PPV. Ryder and Hawkins lament about Zack’s name being wrong on the graphic last week and feeling like a loser too. Kurt talks about having three Is when he started, but now having three Ds – with one being for depression as he can’t fight father time. Corbin comes down before being joined by Drew, but luckily, Braun makes a save.

Seth is shown pointing at the Mania sign and also being massacred by Brock last week. Boss and Hugg Connection gets jumped on the ramp and Bayley plays the face in peril with Nikki. Bayley gets an awkward stacking cradle to win. Apollo insults Drake Maverick and Akem for a bit. Road Dogg comes out and does JJ’s intro. Jeff Jarrett comes out thankfully in his TNA gear and a top. He should just wear the same kind of top he did in early TNA that matches his gear. JJ and Road Dogg sing, strut, and Road Dogg gets blown up and buried by Elias.

Jeff takes the top off to work and lands a kick off a backdrop duck and a few great punches. Drift Away ends it before Road Dogg slugs away at Elias. He tells Elias to suck it and Jarrett bonks Elias with the guitar. Dana talks to Nattie, who doesn’t respond and says she’ll make a match with a McMahon against her next week. Nattie takes out her Airpods, leading to the first ever Airpod-related build to a match.

A recap of the Becky-Steph stuff airs before Finn Balor is told that he looks like he’s in too much pain and needs to stop put his pride in front of his health. Lashley comes out and threatens Balor, but instead has Lio Rush face him. Rush looks so much better in long tights than trunks. Rush hits a slingshot stunner and takes out a cameraman in the process. Rush misses the frog splash and eats a shotgun dropkick and the double stomp ends it. It’ll be Balor vs. Lashley at the Chamber PPV. Paige comes out to do a preview for her movie.

Alexa does a moment of Bliss with EC3, but Nia and Tamina get involved. Nia says everyone should talk about her breaking boundaries by beating in the Men’s rumble – which was done before. Dean Ambrose comes out and says he needs to say something to Nia – she has a huge crush on him. He says he understands – a lot of women are confused by his raw sexual magnetism, but he needs for her to never come near him again and also, he’d like to know who EC3 is. Dean gets knocked on his ass and EC3 beats him quickly. Braun and Angle hype themselves up for their main event. Mojo cuts another promo to hype himself up to not be a loser anymore. Angle and Braun face Drew and Corbin in a nothing match. It’s a series of moves until a giant brawl and then the heels are left laying by Braun. I’m just glad Kurt was made to look competent here – it’s a welcome change of pace.