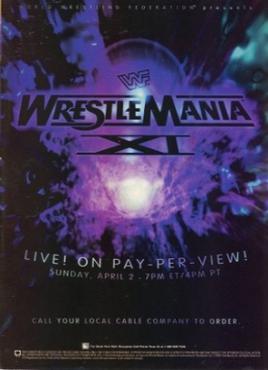 Vince McMahon and Jerry Lawler are on commentary.

~MATCH #1~
The Allied Powers (British Bulldog & Lex Luger) defeat The Blu Twins (Jacob Blu & Eli Blu) (w/ Uncle Zebekiah) at 6:34. Jacob and Eli try to attack before the bell, but Luger and Bulldog are ready for them. The brothers withstand the early onslaught and they take over on Bulldog. Vince mentions that Bulldog was once a Tag Team Champion with Dynamite Kid, and I feel like it was rare for him to mention somebody who wasn’t in the company at this time. Bulldog makes the comeback and Luger gets the hot tag. Luger cleans house, hitting the loaded forearm on one of the brothers, and the referee loses control. Zebekiah distracts Luger, allowing the brothers to switch places. The brother goes for a piledriver, but Bulldog makes a blind tag and comes off the top rope with a sunset flip to get the pin. This was an opening match.
Rating: **

~MATCH #2~
Razor Ramon (w/ The 1-2-3 Kid) defeats Intercontinental Champion Jeff Jarrett (w/ The Roadie) by disqualification at 13:32. Jarrett has been the Champion since 1.22.95, and this is his second defense. He won the title from Ramon at the Royal Rumble, and the Bad Guy is eager to win it back. Roadie and Kid both get involved several times early on, and Ramon survives the double-teaming attempts. Jarrett focuses on Ramon’s legs, which is smart given how well that worked for him at the Rumble. Ramon fights back a lot though, almost like he doesn’t want to cooperate tonight. In the end, Ramon goes for the Razor’s Edge and Roadie comes in and clips his knee for the disqualification. Kid comes to the rescue and the brawl is on. Jarrett takes Kid down and traps him in the Figure-Four, and officials have to come out and break it up. Match was okay but pretty disjointed.
Rating: **¼

~MATCH #3~
The Undertaker (w/ Paul Bearer) defeats King Kong Bundy (w/ Ted DiBiase) at 6:36. MLB Umpire Larry Young is the referee, since baseball was on strike. McMahon mentions that Undertaker has never lost at WrestleMania, so I guess that’s the earliest mention of The Streak. Bundy tries to squash Undertaker in the corner right away but Undertaker moves out of the way and goes to work. Undertaker hits Old School and takes Bundy down with a succession of clotheslines. Bundy comes back with a clothesline that sends Undertaker to the floor, where he’s able to grab the gigantic urn from DiBiase and hand it back to Paul Bearer. Back in the ring Undertaker goes to work as DiBiase calls Kama out to ringside to reclaim the urn. Undertaker tries to stop him but DiBiase, Kama, and Bundy are too much to overcome. Bundy is in control now and he clotheslines Undertaker to the floor. Back in the ring Bundy keeps Undertaker on the mat and uses his girth to wear him down. Bundy hits the Avalanche but the Dead Man comes right out of it and kicks Bundy in the face. Undertaker bodyslams Bundy and then hits the flying clothesline to score the pin. That was probably as good as you were going to get from Bundy at this time. Or any time, really.
Rating: *¾

~MATCH #4~
Camp Cornette (Owen Hart & Yokozuna) (w/ James E. Cornette & Mr. Fuji) defeat WWF World Tag Team Champions The Smoking Gunns (Billy Gunn & Bart Gunn) at 9:42 to win the titles. Billy and Bart have been Champions since 1.23.95, and this is their fourth defense. Owen introduced Yokozuna as his mystery partner, stating that Yoko did something he always wanted to do – beat Bret Hart for the WWF Championship at WrestleMania (IX). That’s sound logic. Despite not being prepared for Yoko, the Gunns control the early going, keeping Owen isolated in their half of the ring. That doesn’t last too long though, and the challengers keep Billy away from his brother. Eventually, Bart gets the hot tag and the referee loses control. Billy tags back in and gets caught with a belly-to-belly suplex. Owen takes Bart out with a low bridge to the floor. Yokozuna then hits Billy with the Banzai Drop. Bart comes back to break up the pin, but Yoko dumps him to the floor. Owen tags in and teases the Sharpshooter, but then just takes the pin instead. I LOVE that finish and Owen’s celebration is cute too. Pretty solid tag match, better than I remembered.
Rating: **¾

~MATCH #5~
Bret Hart defeats Bob Backlund at 9:34. Roddy Piper is the Special Referee. The Hitman goes right after Backlund, and Piper has a microphone so everyone can hear him asking for the submission and what the wrestlers say. This is important. Bret goes after the left leg, an obvious setup for the Sharpshooter. Backlund fights back and attacks the arm, no doubt setting up for the Chicken Wing. In the end, Backlund tries the Chicken Wing, but Bret reverses it and takes Backlund down with a body scissors. Backlund sort of screams “Yeaaaa” into the microphone and Piper declares Bret the winner. I like both Bret and Backlund, but this was just short, awkward, and not the least bit engaging.
Rating: *½

~MATCH #6~
WWF World Heavyweight Champion Diesel (w/ Pamela Anderson) defeats Shawn Michaels (w/ Sid and Jenny McCarthy) at 20:35 to retain the title. Diesel has been the Champion since 11.26.94, and this is his fourth defense. Michaels tries to use his quickness to outmaneuver Diesel in the early going, but the 7-foot Champion manhandles his former boss. Diesel throws Michaels around both in and out of the ring. When Michaels finally gains control, he goes to work on Diesel’s ribs, which McMahon says were injured coming into this match. The referee twists his ankle at one point and doesn’t see when Michaels hits Diesel with Sweet Chin Music and has him pinned. Sid gets the ref back in the ring but not in time. Diesel comes back with a nice side suplex, and then catapults Michaels halfway across the ring. Diesel fires up and drills Michaels with a big boot to the face. One Jackknife Powerbomb later and Diesel retains the title. Michaels is amazing of course, but this was a very good match and Diesel held up his end. They worked a simple layout, but it worked well given the size difference between them. This was probably Diesel’s best match ever to this point.
Rating: ***¾

~MATCH #7~
Lawrence Taylor (w/ Carl Banks, Chris Spielman, Ken Norton Jr., Reggie White, Ricky Jackson, and Steve McMichael) defeats Bam Bam Bigelow (w/ Irwin R. Schyster, Kama, King Kong Bundy, Nikolai Volkoff, Tatanka, and Ted DiBiase) at 11:42. Bam Bam is cocky, and LT makes him pay, sending him right out to the floor with a clothesline. After some gaga with all the extra dudes on the floor, Bam Bam takes control of the match. Bam Bam wears LT down, keeping him on the mat to mitigate his explosive power. He goes up and hits the moonsault, but appears to have hurt his knee on the landing. Bam Bam goes back up and hits the diving headbutt, and LT kicks out at two! He gets frustrated and takes his eye off the ball, and LT attacks with a flurry of shoulder tackles in the corner and forearm blasts. LT goes up to the second rope and delivers a forearm right to the chin, and that’s enough to get the pin. Totally fine match that didn’t ask too much from the non-wrestler. I mean it killed Bam Bam Bigelow’s career, but on its own merits I liked it.
Rating: ***

JZ Says
At two hours and 25 minutes, this show breezes right by. The final two matches deliver, which saves this from being in the conversation for worst WrestleMania ever (though not by much).