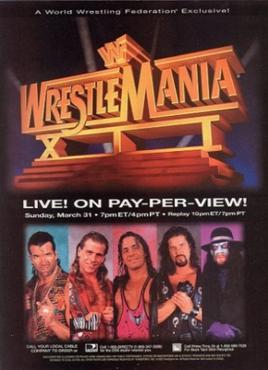 Vince McMahon and Jerry Lawler are on commentary.

~MATCH #1~
Camp Cornette (Owen Hart, British Bulldog & Vader) (w/ James E. Cornette) defeats Yokozuna, Jake Roberts & Ahmed Johnson) (w/ Mr. Fuji) at 12:51. Seeing Fuji wave the American flag just looks weird. If the good guys win, Yokozuna gets five minutes alone in the ring with Cornette. It’s a big brawl to start, and the babyfaces clean house. The big draw here is Vader v Yokozuna, and the crowd reacts accordingly. Action moves fast in this one, especially considering a few of the participants. Cornette cheats to help his team gain control. The bad guys get to control each of the good guys for a few minutes, and that allows for multiple hot tags and the crowd stays into it. The referee loses control and doesn’t see Jake hit Owen with the DDT. Cornette tries to interfere and Jake sets him up for a DDT, which gets broken up by Vader. That leaves Jake in perfect position for a Vader Bomb, and Vader gets the pin. Good choice for an opener, and a match I’ve always liked more than most people seem to.
Rating: ***

~MATCH #2~
Steve Austin (w/ Ted DiBiase) defeats Savio Vega at 10:00. Savio starts off hot, throwing Austin around a bit. Austin is tenacious though and they exchange strikes in and out of the ring. Momentum swings back and forth, as everything both guys do looks like it has some stank on it. Austin focuses on Savio’s arm. Late in the match, referee Tim White gets hit with an errant spin kick from Vega, and he’s way out. Austin capitalizes by hitting Vega with the belt, and then adding one more belt shot right to the back of the head. Savio is out. Austin puts on a sloppy Million Dollar Dream, and DiBiase wakes up the official, who sees Savio is out and calls for the bell. The finish took a little long to execute, but aside from that this was a heck of a match. Did Savio Vega have good matches with anyone besides Austin?
Rating: ***¼

~MATCH #3~
Ultimate Warrior defeats Hunter Hearst Helmsley (w/ Sable) at 1:36. Helmsley attacks right away and hits a Pedigree! Warrior pops right up and hits a series of clotheslines. He hits the shoulder-block, press slam, and back splash to get the pin. It’s fun to see young HHH get squashed. This was exactly what it should’ve been.
Rating: ½*

~MATCH #4~
Undertaker (w/ Paul Bearer) defeats Diesel at 16:46. Diesel shows no fear and attacks Undertaker right away. He clotheslines Undertaker to the floor but Undertaker lands on his feet and pulls Diesel out with him. Undertaker slams Diesel’s head off the ring steps. Back in the ring, Diesel cuts Undertaker off but tries a back body drop and pays for it with an uppercut. Undertaker tries the Tombstone and Diesel slips out, but Undertaker hits a cross body block of all things for a two-count. The Dead man goes up and hits Old School, but Diesel doesn’t even go down. Undertaker tries another cross-body block and Diesel ducks this one, but Undertaker is not that hurt, and he snaps Diesel’s neck off the top rope. They go back to the floor, and Undertaker rams Diesel’s back into the ring post. Undertaker tries to hit Diesel with a chair but misses and hits nothing but post. Diesel whips Undertaker into the guardrail. Big Daddy Cool is in control now, using his strength to work Undertaker over. He hits a Big Boot to the face. Diesel spends several minutes wearing Undertaker down, and then Undertaker fights back and both men hit a simultaneous big boot to knock each other out. Both men rise and Diesel takes control with a bearhug. Diesel switches it up to a headlock and Undertaker suplexes his way out of it. Undertaker hits a big elbow drop. He goes up top and this a huge flying clothesline for two. Diesel fights back and this the Jackknife! He gets cocky and Undertaker sits up! Diesel hits another Jackknife, but Undertaker refuses to stay down. Undertaker grabs Diesel by the throat and gets to his feet. Diesel fights him off and hits a back suplex. Undertaker gets right back up again and hits Diesel with the flying clothesline. He hits a devastating Chokeslam and both men are down. Back on their feet Undertaker hits the Tombstone for the win. That was much faster paced than I would have expected and was quite good. They matched power for power and complimented each other’s’ styles very well.
Rating: ***¼

~MATCH #5~
Roddy Piper defeats Intercontinental Champion Goldust in a Hollywood Backlot Brawl. This match started after the six-man tag. They fight in a Hollywood Back Lot and hit each other with some stiff shots and various weapons. Goldust bails and runs Piper over with his gold Cadillac on the way out. Piper gave chase in a white Ford Bronco, so they parody the OJ Simpson car chase until they make it back to the area just before the main event. They have a weird brawl in the ring, and Piper gets angry when Goldust kisses him, and responds by grabbing Goldust’s junk and squeezing it. Piper then rips Goldust’s body suit off, revealing some, well, revealing lingerie, and drops a knee right into the groin. Goldust bails and I guess Piper wins? This was bizarre and borderline offensive. Piper kind of has a lot of that in his history that I think gets glossed over.
Rating: DUD

~MATCH #6~
Shawn Michaels (w/ Jose Lothario) defeats WWF World Heavyweight Champion Bret Hart 1-0 at 1:52 in overtime of a 60-Minute Iron Man Match to win the title. Hart has been the Champion since 11.19.95, and this is his sixth defense. The first ten minutes is all chain wrestling, as Lawler and McMahon are explaining the holds and their purpose, and it’s such a stark contrast to how things are today. Michaels spends a lot of time working the arm, and Hart targets the neck in response. Around 15 minutes in, Hart clotheslines Michaels to the floor, where Michaels accidentally knocks the timekeeper out with an errant Sweet Chin Music. Back in the ring the momentum shifts back and forth. Interestingly, Hart is clearly the more aggressive of the two. At about the half hour mark they’re still chain/mat wrestling and no one has gotten a decision yet. They pepper in occasional big moves and high spots to keep the crowd engaged. Hart gets a second wind and unleashes a flurry of his signature moves. He goes up top and pulls Michaels down with him in an awkward spot that also knocks the referee down as we officially cross 30 minutes. Both men have counters and reversals, and they both achieve multiple near-falls. At just over 35 minutes in, Hart backdrops Michaels over the top rope in the corner, and Michaels takes an insane bump to the floor. Hart is in control now, and he changes his focus from the neck to the lower back. He punishes Michaels with a variety of offense. In a great moment, Hart whips Michaels into the corner and he goes all the way up and over, clipping Lothario with his leg on the way down. The crowd cheers and Hart has a slight smile. Out on the floor Hart whips Michaels into the stairs and knocks Lothario over again. After throwing Michaels back in the ring Hart tells Lothario to get out of the way. That’s good advice. Hart dominates for quite a while, wearing Michaels down but not really going for any pin-falls. He does use the Figure-Four Leglock, but curiously doesn’t try the Sharpshooter. Michaels makes the big comeback and he does try several pins, but he can’t keep Hart down. The crowd perks up as the clock winds down. Michaels comes leaping off the top rope and Hart catches him in the Sharpshooter with 30 seconds to go! The time limit expires, and Michaels does not give up.

WWF President Gorilla Monsoon declares that the match must continue under sudden death rules. Hart is not happy about this development, and he takes out his frustrations on the challenger. Michaels catches Hart with a surprise Sweet Chin Music, but he’s too exhausted to make the cover. Both men get back to their feet and Michaels hits one more Sweet Chin Music to get the pin and his first WWF Title. I like this match a lot, particularly that they could go over an hour and only use finishers three times. Guys are doing way more than that now in matches a third the length. They spaced out the big spots well, and I think no decisions in the first 60 minutes of the match was cool. The only downside to that is that there were large chunks of time where it didn’t even feel like either guy was even going for a win. Also, a lot of the arm and neck work from the first part of the match didn’t end up going anywhere. Still, this is a great effort and a memorable match from two of the greatest of all-time.
Rating: ****¼

JZ Says
This is an underrated show, though I think a lot of that depends on what you think of the main event since it takes up about half the show. Outside of the Backlot Brawl, the opening six-man tag, Austin/Vega, and Undertaker/Diesel were solid matches, and the Warrior match was a fun squash.