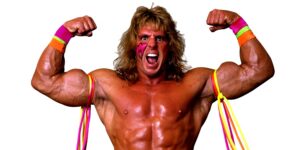 April 8 marks the fifth anniversary of the death of The Ultimate Warrior.

He was a figure of fun at times, and the DVD The Self Destruction Of The Ultimate Warrior was a terrible way to look at the man. It actually made me angry, and is the only wrestling DVD I have ever got rid of.

For I, on the other hand, was a fan. The match at Summerslam 1989 when he won the Intercontinental Title back from Rick Rude was what did it. He was no longer just some big strong guy with an amazing look and tassels, he actually showed he had some wrestling moves. I had already had my own first match by that stage, and while I looked more like “Iron” Mike Sharpe and wrestled like “Hacksaw” Jim Duggan (or the other way round), I always wished I could be The Ultimate Warrior.

When my favourite wrestler Randy Savage died, Warrior posted the best online tribute to him as a man of all tributes I saw. It was heart-felt and it was brilliant. It made Warrior rise even further in my estimation.

Time passed. When the WWE forgave him and he forgave them all the bullshit that had passed between them, and he got his well-deserved place in the Hall of Fame, as a fan I was really pleased. And that last appearance at RAW was awesome and actually brought a lump to my throat. I felt genuinely happy for the man.

And then he died.

It felt like it came out of nowhere. While it didn’t strike me as hard personally as the death of Randy Savage did, it was still a shock and I couldn’t believe it for a long time. A part of my mind even thought it was some sort of story-line, and I was in my 40s at the time! But it was real.

So, looking back from five years after his tragic passing, I am going to look at my 5 favourite Ultimate Warrior matches. Now, as a fan, I am going to pretend his WCW run never happened. And the only stuff I’ve seen of him pre-WWF was on the 2 DVD sets Always Believe and Ultimate Warrior The Ultimate Collection. So all of these matches are from his WWF run… in fact, his first WWF run.

Close run thing – the steel cage match against Rick Rude for the world title at Summerslam 1990, where Roddy Piper on commentary rails against his tassels, but looking back at it that was Rick Rude bumping in place of really doing many moves.

I’d also include when he beat The Honky Tonk Man in about 15 seconds for his first IC Title, but that was more feel-good than an actual match. Don’t get wrong, it was awesome at the time, and I loved it. Also the 1990 version of the Royal Rumble, but Warrior was only in there for maybe 10 minutes. Warrior draws number 21, and his appearance does 2 things – it wakes up the crowd and picks up the intensity and speed of everything in the ring. The match had sort of bogged down prior to his arrival, but then he appeared and everything went off the charts. The crowd’s explosion for his appearance has to be heard to be believed. He is involved in 3 or 4 eliminations before Hogan comes in at number 25, and the two of them clear the ring. Then they have their first confrontation, before a double clothesline spot, and eventually Hogan helps eliminate him, starting to set up Wrestlemania VI.

Look, this is not a technical masterpiece by any stretch of the imagination, and it is the old fashioned SurSer elimination match (the 4-on-4 version, not the 5-on-5 version), but I still really like this match. It’s stupid, but I like it. Warrior is last to the ring after his team-mates are getting beat up by the heels and eliminates Andre the Giant by knocking him out of the ring for the count-out. Then Neidhart is pinned by Haku. There’s some awesome Rockers v Anderson/Haku exchanges, and Heenan gets the cheap pin on Jannetty, then Haku is pinned, Michaels is pinned, Warrior pins Anderson, then he plays games with Heenan for shits and giggles and because it’s fun, before shoulder-blocking him into mush to send the crowd home happy. I think the reason I liked this is that it looked like everyone was actually having fun. Silly, but I liked it.

One of the best booked matches ever, in the style of Paul Heyman, where each man’s strengths were highlighted so perfectly, and any weaknesses were hidden masterfully. The commentary was some of the best Ventura did, and the crowd was off the freakin’ charts for the whole match. They even cheered a protracted bearhug! Leading up to this match, a mate of mine and I were so sure Hogan was going to win (again!) that we were almost dreading watching the show. When he won… well, the neighbours were probably not happy. It was a good match, maybe not technically perfect, and both wrestlers pulled out some nice moves and it had a clean pin and then Hogan handing the belt over to Warrior capped it off. Very cool.

Rude won the title from Warrior at Wrestlemania V with help from Bobby Heenan in a spot that is not used as much nowadays as I thought it might be. That match was okay, but this one was intense. I’ve mentioned before that the selling of early era matches are about being more than acting injured, about there being other emotions involved – in this match Warrior sells being pissed off brilliantly. And Jesse Ventura makes Tony Schiavone cry when he goes off on a rant about what Warrior is doing outside the ring, asking if it would be legal to use a gun because “it’s outside the ring”. But the match is great. Warrior overdoes his aggression, Rude takes advantage, and then Rude is distracted by Piper mooning him, acts like a moron, falls prey to a belly to back suplex from Warrior and Warrior gets the title back and the crowd explodes.

The back story to this – whose side was Ric Flair & Mr Perfect on – threatened to overshadow the match, but these two had such insane chemistry that it didn’t matter. The ending was the only bit that annoyed me – no real winner – but the rest of the match was superb. Back and forth, the crowd chanted for both men, and it was just great. They were both faces, but the Flair/Perfect thing had them distrustful of one another and they wrestled as sort of heelish faces and it was such a unique dynamic that it worked. The ending, with Flair hitting Warrior, and then Savage going after Flair but getting chaired and them counted out, followed by Flair and Perfect attacking Savage and Warrior making the save was more storyline than match, but it did lead to the frankly superb Savage v Flair at Wrestlemania VIII so, in the end, it was worth it. However, these two did have such awesome chemistry that…

My favourite match of all time (not the best match – that would be a TNA match from 2005… In. My. Opinion.) involving not only Warrior but my favourite wrestler in Savage. I even used this as the template for a short story that was published back in the early 2000s. Again, selling is more than being hurt. Warrior is pissed, but he understands the importance of this whole thing (it even says as much on his coat) and he walks to the ring, not runs. He then methodically destroys Savage, but every time he goes for a big move, Savage manages to side-step and take advantage. Warrior has to deal with Sherri as well as Savage, and that goes against him a few times. And the ending when he kicks out after five (5!) freakin’ big elbows before finally getting the gorilla press and the pin with one foot on the chest still sends shivers up my spine. The pin with one foot is a bit much, but it works in the context of the match. Of course, then the extraneous stuff which does not involve Warrior happens as Savage is belted by Sherri and saved by Miss Elizabeth just helps elevate the match to legendary status. This match is, to me, glorious.

So, there you have it – my five favourite Ultimate Warrior matches.

RIP Warrior – this fan, at least, misses you…