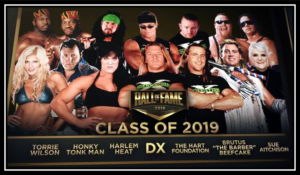 I believe it is compulsory for anyone who writes about wrestling to fit a Wrestlemania column at this time of the year into their busy writering schedules.

Therefore, as set out by the rules of which I had no say in, here’s my WM-themed column – this year’s Hall of Fame Class!

I think that often the Hall of Fame gets short shrift. We look at the main eventer in the HoF, maybe one or two others, and then go, “Meh. I think I remember So-and-so, I liked, Whatsit, but who in the hell are Oozits and Thingumabob and why is That-person getting inducted?”

That’s essentially this column in a nutshell. The only difference being I have seen all of these class members wrestle, know a bit about them and can even recall stuff they did in the ring.

The first thing I will say is that the class of 2019 is particularly heavy with talent. All of the people/groups deserve their induction. That’s actually a rarity. Most years there’s some-one inducted that makes me go, “Really?” but not this year.

The Honky Tonk Man (Wayne Farris) definitely deserves to be there. According to what I’ve managed to find, he is still the longest reigning Intercontinental champion, his sole reign lasting 454 days. But there is more than just that record. He drew crowds. He was not the most technically gifted wrestler but he was one of the best heels in the business. He found a way to win or retain his title that was so close to the very limits that the crowd came just to see if this would be the time he was beaten. They wanted to see him get slaughtered, but he’d escape each and every time. That is the sort of heel heat that is just not seen often enough anymore. The crowds legitimately wanted to see him killed.
Personal memory: When Honky first started in the (then) WWF, as a wrestling Elvis impersonator, he thought the crowds loved him. So it was put to a vote and the people voted he was a jerk. He lost it! One of the funniest things I’ve seen. And, of course, when The Ultimate Warrior beat him for the IC title in 15 seconds… well. That was the loudest pop I think I have ever heard. Ever.

Torrie Wilson was not a good wrestler. Not by any stretch of the imagination. But she was more than just a valet who looked good. She got involved in matches, and then stepped into the ring. I believe she was in the first ever WWE “lingerie” match, which was so memorable I had to rewatch it in No Mercy 2001 to see that she actually won it. However, I remember Torrie mainly for her WCW run, where she was with David Flair, then Billy Kidman. She turned on both of them (of course; this was WCW), and ended up with Shane Douglas. She was a better actress than the guys she was paired with (maybe not Shane Douglas) and she was the one who made their back-stage stuff watchable. Then came the WWE… Look, she worked hard to improve in the ring, to be more than just eye candy, starting to set a standard for women’s wrestling (that they be able to wrestle) that others at the time did not seem to care about… but the whole Al Wilson thing was just abysmal. Oh, and there was some magazine called Playboy and she might have been in it and then promoted as a cross-over or something. I’m sure it wasn’t important.
Personal memory: The scaffold match with her and Douglas against Madusa and Kidman. She looked terrified beyond words to be even doing it and I really felt sorry for her.

Brutus “The Barber” Beefcake (Edward Leslie) was also not a good wrestler. But he was a good sports entertainer. And therein lies the difference. His matches were never technical masterpieces but they were generally entertaining, especially in the (then) WWF. As a heel he was one of the ‘cowardly’ heel tropes, but then he became a face and took on his “Barber” moniker and suddenly the crowd wanted to see him. Victims I remember include Leaping Lanny Poffo, Sensational Sherri (a chunk of her ponytail was removed) and Jimmy Hart. He also inflicted Mr Perfect’s first loss upon the man. Then he had his accident, destroyed his face, had metal plates inserted (onto which Bobby Heenan, I think, stuck fridge magnets!) and teamed with Hulk Hogan at (sigh!) Wrestlemania IX. And then we have his WCW run. Each month he’d have another new name and new gimmick until it became such a running joke that he was the running joke. Oh, and he appeared in what I consider the worst movie ever made (bar none) – Santa With Muscles starring Hulk Hogan. He played an Oriental person. No, seriously.
Personal memory: At Wrestlemania III when he and Greg Valentine (with whom he’d once held the tag team titles) had an argument after winning their match and he came back later on to help Roddy Piper defeat Adrian Adonis and start his “Barber” gimmick.

And now we come to the group entries.

D-Generation X (represented by Shawn Michaels (Michael Hickenbottom), Triple H (Paul Levesque), Chyna (Joan Laurer), Billy Gunn (Monty Sopp), Road Dogg (Brian James), and X-Pac (Sean Waltman)) came to define the WWE’s ‘Attitude Era’. Now, to be honest, I think Shawn Michaels is a good wrestler but not the greatest some claim, I think HHH needs a good opponent to be watchable, I think Chyna revolutionised women’s wrestling and deserves an induction as an individual, I think the New Age Outlaws are vastly over-rated and were amongst the first to realise a catch-phrase can do instead of actual wrestling, and I am a huge fan of X-Pac. But there is no denying that what they did was different and edgy and something we had not really seen before on wrestling TV. They took the ECW template and instead of being OTT in the ring with violence, they were OTT with their actions and attitude outside the ring. They took wrestling away from the stupid gimmickry that was too prevalent and created characters that were not cookie-cutter.
Personal memory: In 1998 (YouTube tells me it was April 27), as part of the ever-more insane Monday Night Wars, D-Generation X “invaded” the WCW Monday Nitro set. Of course, they never got inside, and no WCW wrestlers appeared, but it was such a ballsy move and, at the time, a real WTF moment that it is still talked about today.

Harlem Heat (Booker T (Robert Huffman) and Stevie Ray (Lash Huffman)) were ten time WCW tag team champions. 10 times! This in an era where WCW had an amazing tag team division, and where many of the great individual wrestlers would tag to get their hands on the titles. Yes, when they started, they were Kane and Kole, and they were slaves under the command of Col Parker, and… well, wrestling. What can we say? But they broke away from that and became such a dominant force. Booker T was, of course, the standout, and his individual achievements speak volumes, but Stevie Ray was no slouch (when motivated). They were in a not too shabby Wargames match, and I remember actually being pleased when they won their first tag title because I could not stand their opponents, Stars And Stripes (The Patriot & Marcus Alexander Bagwell). They were a fine tag team, one of the best WCW produced (up there with the Steiner Brothers) and I’m really glad the WWE are recognising them.
Personal memory: Tough call. I saw their entire WCW run, I remember nearly everything about their career (including… oh God… Harlem Heat 2000), and so my personal memories are pretty wide when it comes to these two. But I’m going to go with the match against the Lex Luger and Sting and the Steiners where they regained their titles at a Nitro because I had no idea when watching it who was going to actually win. I miss that not knowing in wrestling. And then the ending was a clusterf*ck thanks to the Outsiders. Stupid ending aside, great TV match.

And we finish with my second favourite tag team of all time ever (after The British Bulldogs). The Hart Foundation (Bret “Hitman” Hart and Jim “The Anvil” Neidhart) were such an awesome team. You had the skill of Bret and the strength of Jim meshing perfectly. They were brothers-in-law and, from several interviews I’ve heard, actually got along quite well outside the ring as well. And, probably surprising for those of a younger bent, when they were first in the (then) WWF, Jim was often the one who carried the matches. They were both good on the mic, but, really, it was the addition of Jimmy Hart (no relation) as their manager that allowed them to take the next step to greatness. Of course, we all know that Bret eventually outgrew the team to become of the greatest wrestlers of all time; Jim went on to form a new Hart Foundation with Owen Hart (puffy pants included), and then we had the great Hart Foundation angle that reached an absolute pinnacle of awesome at Canadian Stampede. But this is the original two members. The Hart Attack is still one of the best double team finishers ever, and watching Jim throw that drop-kick was an inspiration to this fat wrestler.
Personal memory: Again, like Harlem Heat, I reckon I saw pretty much all of their initial television and PPV run in the (then) WWF. Having said that, everything involving Danny Davis just pissed me off because it wasn’t wrestling as I knew it. I preferred them when they turned face, and I am a sucker for the Wrestlemania V match against Rhythm & Blues (Honky Tonk Man and Greg Valentine). But I am going to go for the time they won their second tag team title against Demolition at Summerslam 1990, which was overdone and involved LOD interference, but I really liked it. I had such a smile on my face as a 19 year old watching this, and it was (in my opinion) the best match on the night.

No video, so here are 6 screen caps!

Legion of Doom work it out!

A happy Neidhart is an awesome Neidhart!

In all, I think the Class of 2019 is a damn fine one. What do you think? Please, sound off in the comments below!