When A Stranger Calls was a massive hit in 1979 when Carol Kane (Taxi) was a babysitter getting phone calls from inside her house. It was a shocker. In 1993, Showtime brought back the fear and Carol Kane with When A Stranger Calls Back. This time a new girl (Popcorn‘s Jill Schoelen) has had a bad babysitter experience and Carol has to help her when things get horrifying again. Scream Factory is bringing out the sequel on Blu-ray this May. They’ll provide both a version that looks like your TV back when you watched Showtime in the ’90s and aspect ratio for your 21st Century TV. Here’s the press release from Scream Factory: 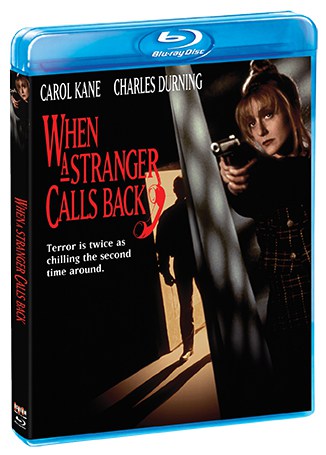 When A Stranger Calls Back

The Stranger is watching you … again. The chilling sequel to When A Stranger Calls, this suspenseful thriller makes its North American Blu-ray debut May 28th, 2019 from Scream Factory. Featuring a new 2k scan of the original film elements in both 1.33:1 (original TV broadcast) and an alternate 1.78:1 version, When A Stranger Calls Back also includes a new interview with director Fred Walton, new interviews with actress Carol Kane and actress Jill Schoelen, as well as Fred Walton’s short film The Sitter as bonus features. Fans can pre-order their copies now by visiting ShoutFactory.com

Five years after her own terrifying baby-sitting ordeal, Julia Jenz (Jill Schoelen, The Stepfather) is trying to put her life together when the past comes back to haunt her. Someone is breaking into her apartment, moving objects around and toying with her. The police think she’s just a hysterical coed, but student advisor Jill Johnson (Carol Kane), similarly victimized thirteen years earlier, is determined to nail Julia’s stalker. Retired detective John Clifford (Charles Durning), who saved Jill’s life before, must find and outwit the culprit before it’s too late in this riveting sequel that reunites writer/director Fred Walton and the stars of the original When A Stranger Calls.