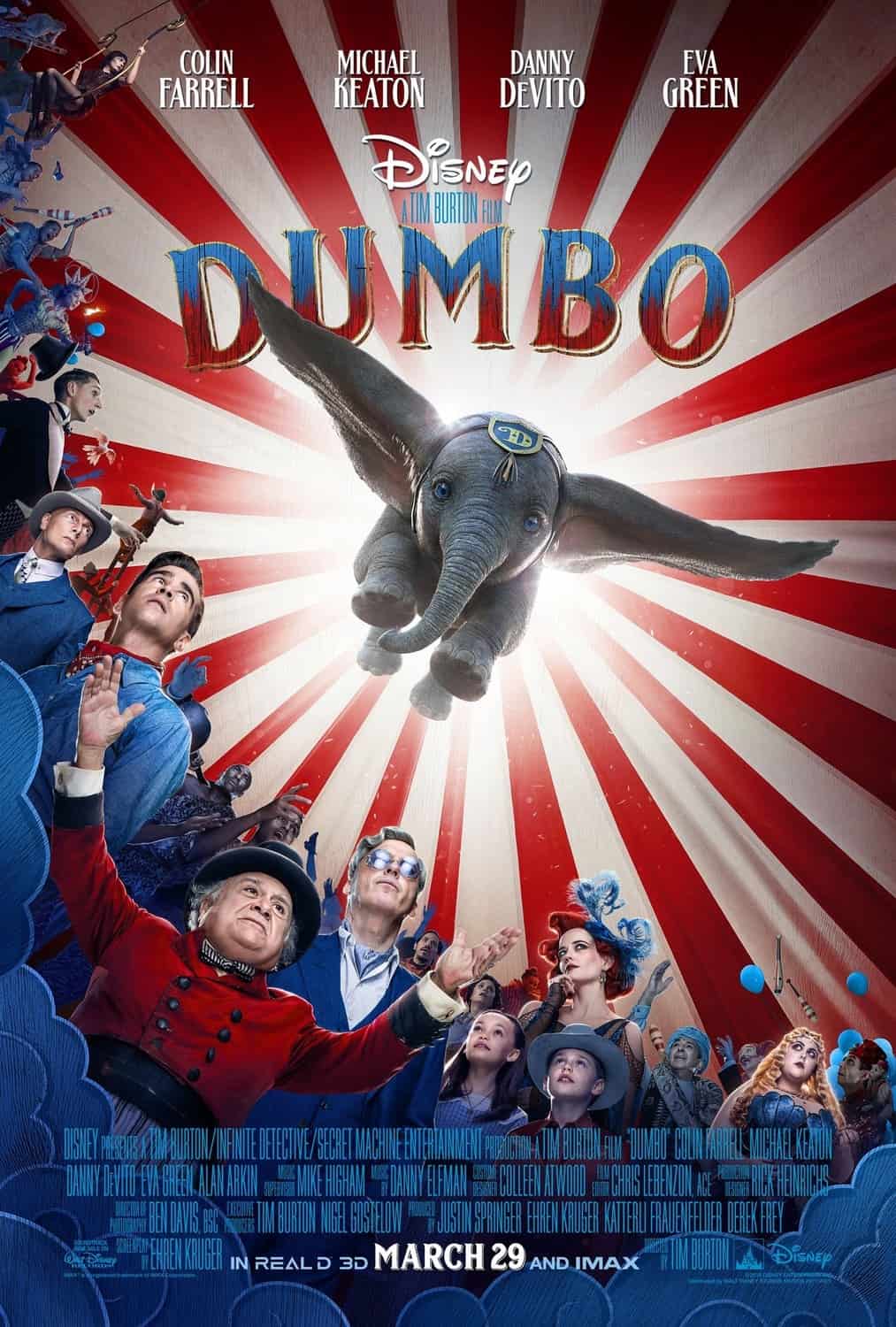 Even when it became clear that Disney was planning on making a live action version of every one of their animated films,

Dumbo still seemed like an odd choice. For those who never saw the 1941 animated film, or more likely don’t remember it very well, Dumbo is an odd installment in the early Disney lineup. At just 64 minutes long, Dumbo is one of the shortest movies Disney ever released that is still considered to be a feature length movie. Most people probably don’t even remember the specifics of the plot. They probably remember that it has something to do with an elephant that can fly using his large ears, and they may remember the crows, or “Baby Mine” or the bizarre “Pink Elephants on Parade” sequence, but how those moments work together to create a complete narrative is usually something that people struggle to remember.

Obviously a lot of plot needs to be added into the movie to stretch the story into a run time that’s acceptable for 2019 audiences. And a few human characters need to be added as well, since the biggest voice in the animated movie, Timothy the Mouse, is reduced to a silent cameo of a mouse in a circus outfit near the beginning of the movie. Instead, our focus is on Holt Farrier, a rodeo performer played by Colin Farrell who is returning from the war having lost his arm. Because the circus that he performed with has fallen on hard times, Holt’s horses have been sold, and he is instead put in charge of caring for the elephants, one of which soon gives birth to the large eared infant that is the titular character of the movie.

For the first half of the movie, the live action Dumbo follows most of the story beats of the animated original, including Dumbo learning to fly, his mother getting taken away (due to being mistakenly identified as a mad elephant) and Dumbo’s unique talent being such a hit with the crowds, that he becomes the star of the circus. Of course, even trying to pad the storyline with Holt and his children, the Dumbo story from the animated version is over halfway through this move, meaning that the second half of the film operates as a quasi-sequel to the story of the original. We’re introduced to V.A. Vandevere (Michael Keaton), an over the top entertainer and theme park owner that is hoping to make Dumbo a central attraction at his park.

Even at this stage in his career, Burton’s visual style is still the strongest tool in his director kit. Even though Dumbo is more visually grounded than some of his other work, the film still has a surreal, dreamlike feel that rides through the movie, as if it were, despite it’s live action status, still very mindful of it’s animation roots. Sequences like this movie’s interpretation of “Pink Elephants on Parade” are still visually captivating, even though they don’t seem to add anything to the narrative other than to pad the run time. (Though in retrospect, that’s pretty much how the original sequence felt, so the blame can’t be laid at Burton’s feet for that.) Likewise the Dreamland amusement park, feels like a classic Burton set, mashing up a thrilling exciting feel of a theme park, with the strange foreboding feeling of the unknown.

In fact it’s the Dreamland sequence where Burton really gets to shine. Michael Keaton gets to go all out with his villainous theme park owner and seems to be having a great time. With the movie finally past the plot of the animated movie, it feels like it can finally stretch its legs and up the stakes. There’s an interesting movie in here completely separate from the flying elephant idea, about a classic carnival clashing with a new, technology driven corporate driven park over the heart of the entertainment business. It feels like rather than the elephant story, it’s that story that lit Burton’s imagination.

Unfortunately, when it’s forced to be a Dumbo movie, it never manages to feel like it’s about very much. Dumbo as a lead character can’t talk, and while it’s true that the animated Dumbo didn’t talk either, as a cartoon, his thoughts and feelings were easily interpreted by his facial expressions. When that character is instead a realistic CGI model of an elephant, the emotional connection to the character is substantially weaker. That lack of characterization is something that plagues the whole group of main characters. Holt’s children feel like one character that was stretched into two, leaving the boy with almost no character development throughout the whole movie. Holt himself, seems forced to simultaneously be the “there’s still hope” voice for the hard times circus, and the cynical adult character to his children.

Dumbo is a movie that feels like it’s supposed to be big. It’s got a big name director and several big name actors. It’s coming out right at the beginning of the Blockbuster movie season, and right in the middle of Disney’s live-action remake line. However, Dumbo isn’t a big story. It’s a small, cute story that works at sixty-four minutes. Back in the 1940s, Walt Disney was told he needed to add more to the movie’s run time if he wanted it to run as an A-picture in theaters. Disney refused and the movie eventually ran as it was. Now, all these years later, seeing the large scale Blockbuster version of Dumbo it looks like Walt Disney may have been right all along.