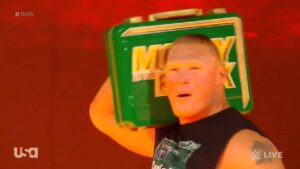 Heyman and Brock come out with Brock bopping the case to his head like it’s a boom box while Heyman is in a tremendous dark blue and white window pane shirt. An MITB recap airs before Heyman talks about Brock as a destructive force for either Kofi or Seth before talking about his father Tricky Dicky Dangerously. He says the good news for Seth is that he doesn’t have to face everyone in the world – but the bad news is that he’ll have to face Brock. Seth comes down and then Kofi yammers on about being the wild card. Kofi says he wants to be remembered as one of the best WWE Champions ever – and he has to beat the best every night. Heyman says tonight, they came to him and they can view this as a way to audition for Brock – but tonight, they’ll have a match.

Sami complains to Lashley about being beaten up last night and being forced to face Braun, and he’s sorry for what happened before, but he wants to give Braun a chance to soften up Braun for Super Showdown. Sami jumps Braun backstage, and this leads to Braun must massacring him in the ring in under a minute. A Lars recap airs and the LHP beats him up a bit before he destroys them again. An AJ-Seth video airs before we see AJ talk to a guy backstage. Ricochet comes ou and we see him backstage before the show with Cesaro insulting him.

Cesaro has a new theme that fits in perfectly with the Swiss Superman moniker – it’s a main event-level theme, so of course he’s just out in trunks. Cesaro sends him high up with a backdrop and catches him off a dive and tosses him into the apron. Cesaro lands an awesome-looking reverse press slam into a backbreaker and then the Neutralizer ends it. AJ is backstage and bickers for a bit with Corbin – so now AJ gets to at least attempt to have a good match with Corbin.

Roman comes down and then Shane talks about doing what he wants, when he wants. Drew is out as Shane’s hired muscle and then we see that Alexa will have Becky as her guest tonight. Shane and Drew bump into Miz, who gets cut down by Drew. The Revival faces The Usos in a really good match. The Top Guys showcased their skills and Wilder landed a nice run-up tornado DDT on the floor off the barricade. A backdrop misdirection into an O’Connor roll from Dawson gives them the win.

Alexa knocks Nikki for not winning and then the Top Guys come back and celebrate and say they should be her next guests. Alexa comes out for her show with Nikki and takes all of her coffee. Becky comes out and then the IIconics are annoying as all Hell and brag about having two belts and then Becky threatens to defeat them and become Becky 3 Belts before Lacey comes down. The IIconics want a fight and Nikki volunteers and Becky makes Alexa part of the match.

Becky knocks Billie down to start before bringing Beyton in. Nikki tags in and takes Peyton down and gets 2 off a bulldog. The IIconics come in and hit a double kick before posing and Lacey tags in. Becky attacks Billey and Billie takes some awkward bumps and then Becky beats her with a dropkick and second rope legdrop. 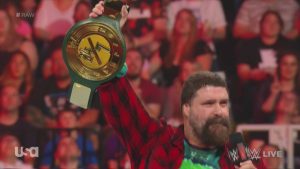 Mick says that they need to put the RAW back into Monday Night Raw. Mick debuts the green and gold 24/7 Title, akin to the hardcore title and it’s open to anyone on the Raw, SD, NXT, NXT UK, 205 Live, and maybe even a WWE Legend. The person who grabs the belt tonight becomes champion. Eric Young has added giant back tattoos for whatever reason. This is almost exactly as stupid as the TNA reverse battle royal, but so much worse because it’s for an actual title we’re supposed to care about. The Good Brothers grab it, but get interrupted by EC3 and Jose. Titus beats up Rockstar Spud and grabs the belt – so he’s the first 24/7 Champion. Robert Roode schoolboys him to win it. EC3’s attempt to lumber forward in a way that resembles running is something else.

Cole does an exposition dump on the opening segment with Brock, Kofi, and Seth. Roode should probably not twirl in place when trying to run away. Miz comes out to face Drew, who has Shane by his side. Drew chops him but gets tripped up on the apron before hitting a big suplex mid-ring. The third hour is SAVED – the Raw logo has a black background instead of white on the LED graphics! Miz gets a figure four, but Drew escapes and eats a baseball slide. Shane jumps Miz and Drew hits a claymore to end it. Shane wants a coast to coast, but Roman runs down to save Miz.

Backstage, Lashley and Corbin talk before Roode runs and then all the other geeks go after him. EC3 STILL ATTEMPTING TO RUN is hilarious. Spud apologizes to them, so I guess he farted or pissed himself again. Rey’s win over Joe is shown and Rey suffered a separated shoulder on the uranage. Joe gets a goofy giant name graphic before saying that Joe respects Rey’s reputation and he knows Rey is honorable, so he’ll give him the belt back or he’ll destroy him. Rey broke Joe’s nose and it’s enormous. 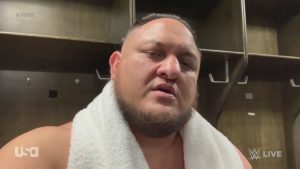 Truth throws Roode into his trunk and misdirects everyone and then uses a ref to become 24/7 Champion. Kofi comes down and his win last night is shown. The tag main event is now a no DQ match. Corbin jumps Seth and lumbers around. Lashley eats an jumping enzuiguri and Lashley eats a superkick with a chair. Brock comes down and trolls them before leaving and ending the show. Well, the Revival match was quite good – but this 24/7 Title is a disaster.