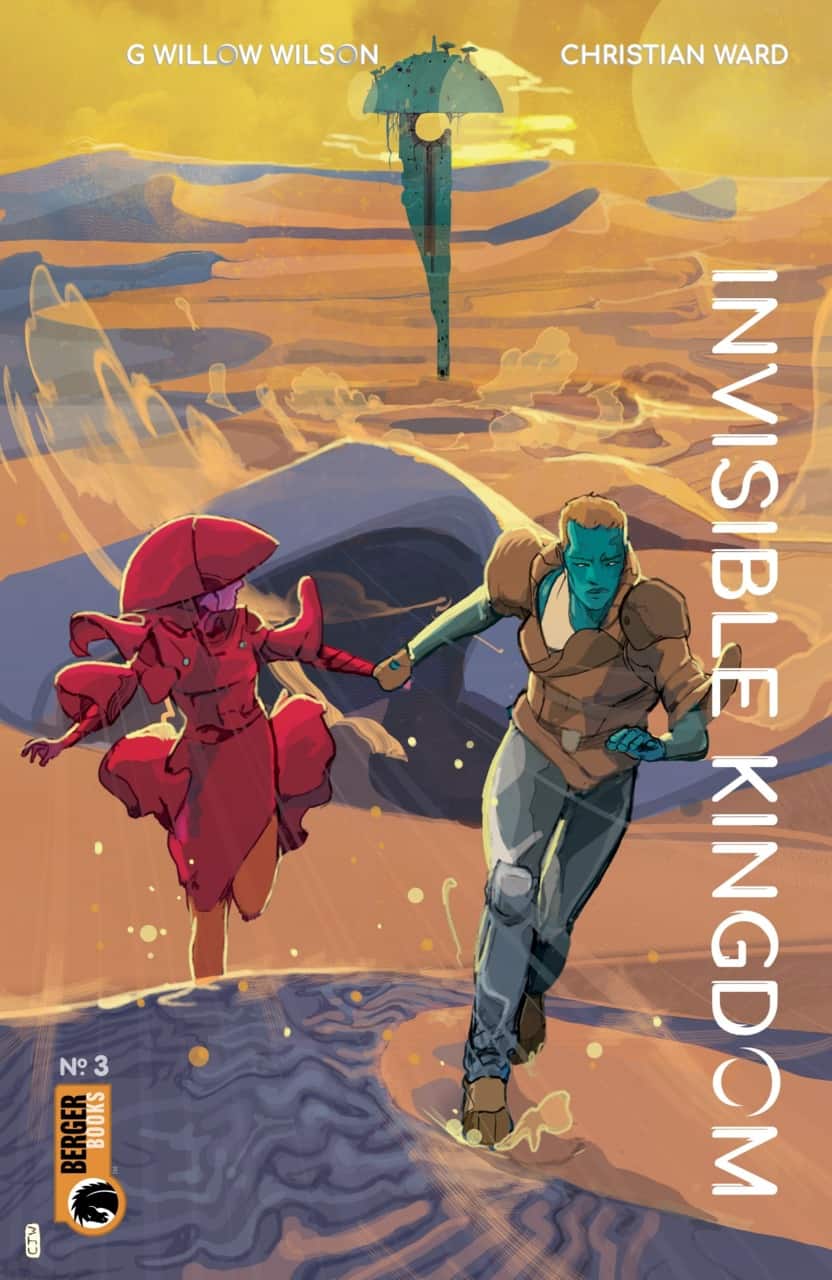 Invisible Kingdom #3 – I’m even more enamored of this series by G. Willow Wilson and Christian Ward than I was before.  The crew of the Sundog is on the run from Lux (galactic Amazon, basically) and low on fuel when they receive word from Vess, a novice none (think nun) who has discovered a connection between her order, which preaches renunciation of material goods, and Lux.  They arrange a meeting, but it doesn’t look like this situation is going to help any of them, as things get progressively worse. Wilson has a very interesting story to tell here, and Ward’s art is easier to follow than it’s ever been before, without sacrificing any of the beauty he brings to his work.  This is an impressive series.

Incursion #4 – This Valiant event comes to a close this week, with Gilad, Dr. Mirage, and the Geomancer facing down the Imperatrix Virago, who is Valiant’s answer to Galactus.  It’s a solid comic, with some nice Doug Braithwaite artwork.

Miles Morales: Spider-Man #6 – Miles and the new hero Starling, who has an interesting connection to a classic Spidey villain, go up against Tombstone in this issue.  I like how Saladin Ahmed is writing Miles, but I’m getting a little tired of just how clichéd Miles’s high school experience is becoming, what with him getting bullied, and having a (possibly racist?) vice-principal constantly on his case for no reason.  Part of the appeal of Miles is that just about everybody loves him, and I think Ahmed might be forgetting that.

The Warning #7 – For the first time, we get to see a little of the civilization of the aliens who have launched an incursion into Los Angeles, which, after an American attack, looks to be turning into a full-out war.  There’s a lot that Edward Laroche doesn’t tell us in this series, but he does keep the book interesting and moving. Each issue is a little more decompressed than I would like, but I enjoy his art and that balances things out for me.

X-Force #8 – I’m worried that X-Force is going to be canceled when Jonathan Hickman’s X-work begins, and that would be a real shame.  X-Force continues to be one of the best books Marvel is publishing today. The team travels to the future to try to rescue Young Cable from Young Stryfe, and find themselves in the middle of a war, as Stryfe’s people make their move against the followers of the Askani.  What makes this book work so well is the sharp writing by Ed Brisson, and the fantastic and unique art of Dylan Burnett. This book is great.

Asgardians of the Galaxy #9

Redlands Vol. 2 Water on the Fire

War of the Realms: New Agents of Atlas #2

War of the Realms Strikeforce: Land of the Giants #1

War of the Realms: Uncanny X-Men #2

The Pitiful Human-Lizard: Some Heart Left

I’ve been a fan of Jason Loo’s Pitiful Human-Lizard since I first sampled it at TCAF four years ago, buying the two issues on offer at that time.  I immediately fell in love with the way Loo portrays Toronto in his comics, and also enjoyed his everyman approach to superheroics.Lucas has been doing his best to become a hero for our city, despite the fact that he’s not really all that good at it.  Loo built a large ensemble cast for this series, including other heroes, villains, and some unique people who became a part of Lucas’s life and world.  The book started as a self-published venture, and then got picked up and reprinted by Chapterhouse Comics, before that company apparently went into hiatus.

Now, at this year’s TCAF, Loo debuted Some Heart Left, the final Pitiful Human-Lizard comic.  I think there were some digital comics released after Chapterhouse stopped publishing physical ones (I’m still holding out hope for a trade), but really, this is the first that I’ve seen Lucas and friends in a while.

This self-published comic is mostly made up of short strips of one page or so, which check in on Lucas and some of the other regulars, showing us what’s up with them.  Lucas is working for “Food Dash”, delivering takeout on his bicycle, and is finding that the costumed business is not as satisfying as it used to be.  His father is starting to decline, and he is not seeing a lot of his friend Kenneth, the Majestic Rat, so much.  Mother Wonder is still off in space.

In a lot of ways, this goodbye to these characters is a sad affair.  It feels like everyone is moving forward except for Lucas, who is a little sadder than normal because his optimism makes him feel a little clueless.  At the same time, this book has a number of high points, such as Lucas facing his fear of heights.

Perhaps my favourite part of this book comes in the form of a folded page tucked into the middle, which shows Lucas visiting Kim’s Convenience, a local corner store that is the set of a sitcom on TV (and Netflix).  Loo captures those characters beautifully.

I’m going to miss seeing more Pitiful Human-Lizard, but look forward to seeing where Loo goes next with his career.  It’s guaranteed that I’ll be buying his next work.

It’s been way too long since we’ve seen James Stokoe do his thing.  Sure, there was that great Aliens four-parter he did last year, but there’s something that makes a creator-owned book a little more special.Sobek is a one-off comic, with a gold foil cover, that centres on the Egyptian crocodile god.  A boat piloted by three acolytes travels to Sobek’s home to let him know that denizens of Set have invaded his temple and are causing problems for his worshippers.  Sobek sets out to address the issue, in his own time and fashion.

As a Stokoe comic, the story becomes secondary to the insanely detailed artwork.  This is a beautiful comic, full of humour and lush colours.  It’s a quick and fun story, and I’m glad I was able to pick it up.  Personally, I wish Orc Stain would get finished one day, but I’m also always going to be happy to get a comic like this from Stokoe.  It’s worth searching for.

I’d thought about getting Tet when it was first published by IDW as a miniseries, because I’m a big fan of stories set during the Vietnam War, but held off because the creators, Pauls Allor and Tucker were unknown to me.  Recently, Tucker started working on the Black Mask series Nobody Is In Control, and I was intrigued by his Paul Azaceta/Tommy Lee Edwards-like art.When I saw him at TCAF this year, I figured it was time to finally get my hands on this story. It is the story of an American lieutenant who fell in love with a Vietnamese woman while he was stationed in Huê City.  He was partnered with a Vietnamese detective when a friend of his was killed, but their investigation was cut short by the Tet Offensive.

From there, the story picks up in 1984, where we see that Eugene, who was injured badly, never got past what went down.  He ended up losing his girl, but when he receives word that Báo, the cop he worked with, has finally tracked down someone who knows what happened to his friend, he returns.

This is a dark and moving story, that is told very well.  Tucker’s thick lines add real weight to things, as we get to know these characters, and understand how war wrecks just about everything it touches.  I recommend this book.

Immortal Hulk #7-17 – I got caught up on this series, which I recognize I should have been reading all along.  Al Ewing is probably the most consistently strong writer at Marvel these days, starting with his excellent Avengers and Ultimates series, and now carrying into this radical re-think of the Hulk.  He’s changed all the rules around gamma-based characters, making them effectively immortal, but only after dark, and taking a new approach to Bruce Banner’s psychology. It makes the character feel fresher than he’s felt since Peter David’s days, and Joe Bennett’s art is as good as it’s ever been.  I’m going to stick with this title from here on out, and hope that it continues to be successful for Marvel, so Ewing’s books can stop being cancelled too soon, like everything else he’s worked on.

Silver Surfer: The Best Defense #1 – I don’t like that the Surfer is working with Galactus again, and even more, I’m unhappy that the changes Al Ewing made to Galactus in Ultimates got reversed so quickly.  It’s really, at this point, a boring dynamic between the two characters. I think they’re bored too, which is why Galactus is trying to stop some mad god who is trailing destruction through the universe, and wants the Surfer to judge some of the worlds this god has put in danger.  Jason Latour has never been a favourite writer of mine, although I do like his artwork here. He’s an odd choice for this book though…

Defenders: The Best Defense #1 – So the non-team is kind of brought together to face a huge cosmic and demonic threat, and it all works pretty well, without being particularly spectacular.  I’ve never been a fan of this Defenders lineup.

The Week in Graphic Novel: 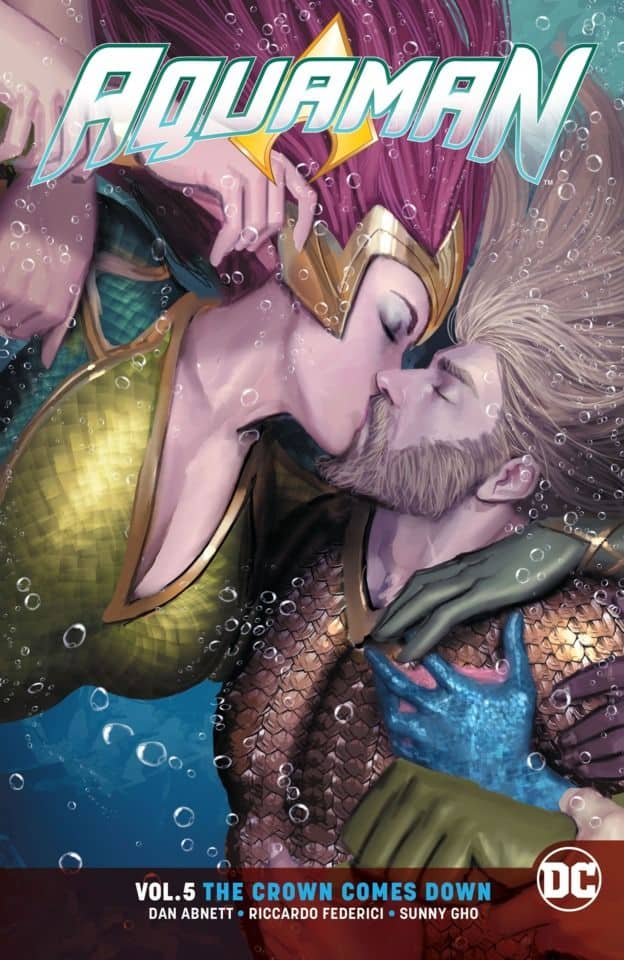 Aquaman Vol. 5: The Crown Comes Down – This fifth Aquaman trade is a little disappointing, in that it only holds three issues of the regular series, and an Annual that doesn’t fit in the continuity.  Arthur rallies some troops to get the mystical barrier around Atlantis taken down so he can save Mera, and attempt to free the city from the rule of Corum Rath. These are good issues, with very nice art by Riccardo Federici, whose look fits with the work that Stepjan Sejic established in the last trade.  The Annual is a nice story with fantastic art by Max Fiumara.